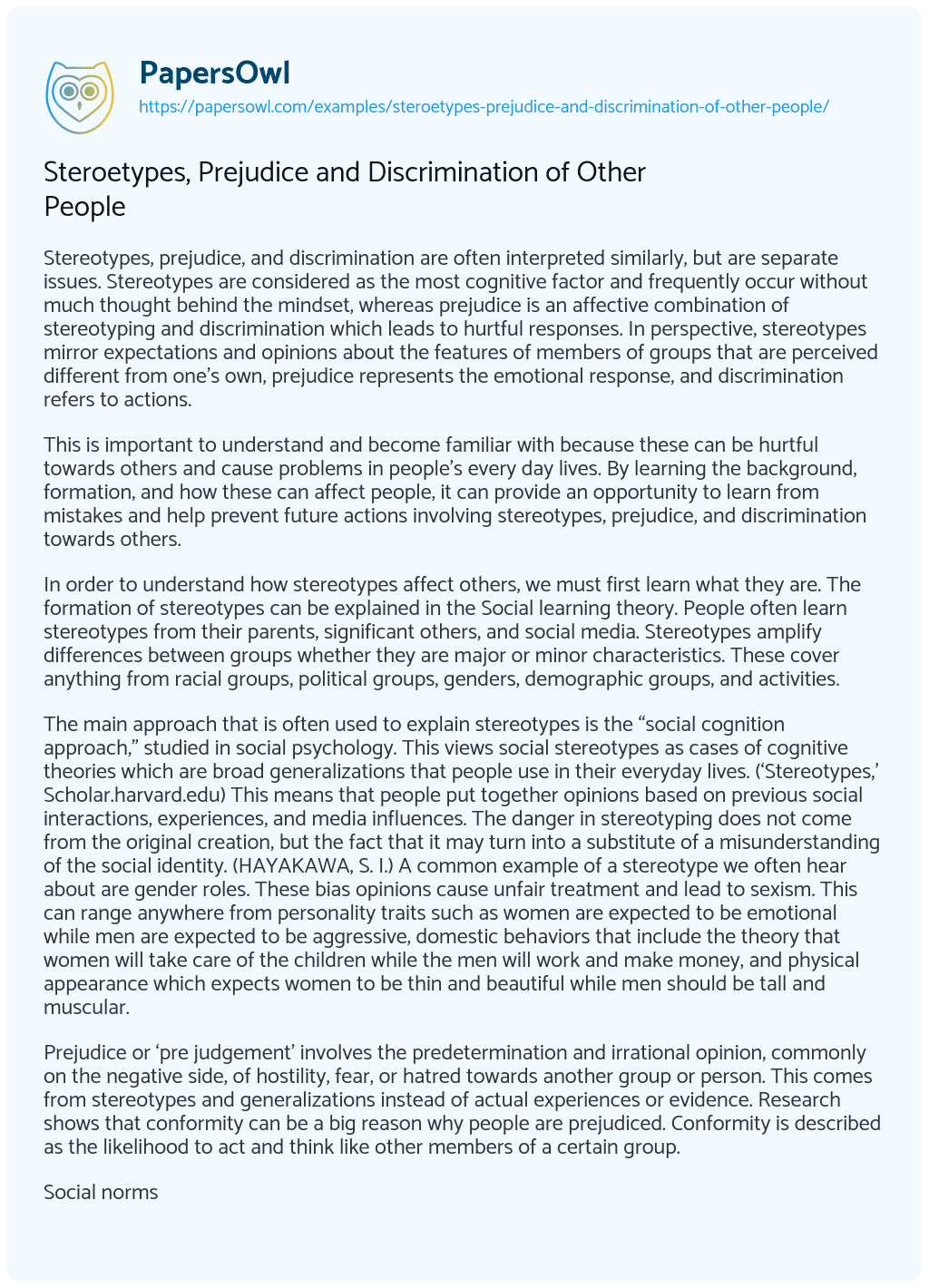 Stereotypes, prejudice, and discrimination are often interpreted similarly, but are separate issues. Stereotypes are considered as the most cognitive factor and frequently occur without much thought behind the mindset, whereas prejudice is an affective combination of stereotyping and discrimination which leads to hurtful responses. In perspective, stereotypes mirror expectations and opinions about the features of members of groups that are perceived different from one’s own, prejudice represents the emotional response, and discrimination refers to actions.

This is important to understand and become familiar with because these can be hurtful towards others and cause problems in people’s every day lives. By learning the background, formation, and how these can affect people, it can provide an opportunity to learn from mistakes and help prevent future actions involving stereotypes, prejudice, and discrimination towards others.

In order to understand how stereotypes affect others, we must first learn what they are. The formation of stereotypes can be explained in the Social learning theory. People often learn stereotypes from their parents, significant others, and social media. Stereotypes amplify differences between groups whether they are major or minor characteristics. These cover anything from racial groups, political groups, genders, demographic groups, and activities.

The main approach that is often used to explain stereotypes is the “social cognition approach,” studied in social psychology. This views social stereotypes as cases of cognitive theories which are broad generalizations that people use in their everyday lives. (‘Stereotypes,’ Scholar.harvard.edu) This means that people put together opinions based on previous social interactions, experiences, and media influences. The danger in stereotyping does not come from the original creation, but the fact that it may turn into a substitute of a misunderstanding of the social identity. (HAYAKAWA, S. I.) A common example of a stereotype we often hear about are gender roles. These bias opinions cause unfair treatment and lead to sexism. This can range anywhere from personality traits such as women are expected to be emotional while men are expected to be aggressive, domestic behaviors that include the theory that women will take care of the children while the men will work and make money, and physical appearance which expects women to be thin and beautiful while men should be tall and muscular.

Prejudice or ‘pre judgement’ involves the predetermination and irrational opinion, commonly on the negative side, of hostility, fear, or hatred towards another group or person. This comes from stereotypes and generalizations instead of actual experiences or evidence. Research shows that conformity can be a big reason why people are prejudiced. Conformity is described as the likelihood to act and think like other members of a certain group.

Social norms influence many people where they must feel ‘normal’ and in compliance with the people around them whether related to or associated with. When parents, friends, social groups, and media show a certain feeling towards a group of people, it is easy to pick up on that feeling and believe the statements without personal thought behind the ideas. Prejudice can make a person feel less than human, frightened, vulnerable, and often lowers self-esteem. Examples of prejudice include racism, sexism, homophobia, religious prejudice, ageism, and nationalism. These feeling can often turn into negative actions by discriminating members of the target group.

Indirect discrimination is when one is treated in the same way as others, but it has a worse affect on the person because of who they are. This puts a person at a disadvantage when there is a policy or rule that has a bigger affect on particular people than others. Some examples can be arrangements, provisions, qualifications, conditions, or criteria.

Stereotypes cause damage alone, but are also harmful by fostering prejudice and discrimination. These three topics can be linked together but is also possible to have cases of these individually. Some possible ways to fix these problems can be to make new friends, get to know people before you make assumptions, value different views of others, or even travel to learn and understand different cultures. Treating people as individuals rather than members of a generalized group is a big step towards equality. Understanding other people’s behavior and actions can help improve human life for everyone.

Steroetypes, Prejudice and Discrimination of Other People. (2021, Apr 16). Retrieved from https://papersowl.com/examples/steroetypes-prejudice-and-discrimination-of-other-people/

Prejudice and Discrimination in College

Sexism is Prejudice and Discrimination

Effect and Influence of Religion on People’s Prejudice

Discrimination and Prejudice in Frankenstein