No Society has been Protected from Discrimination 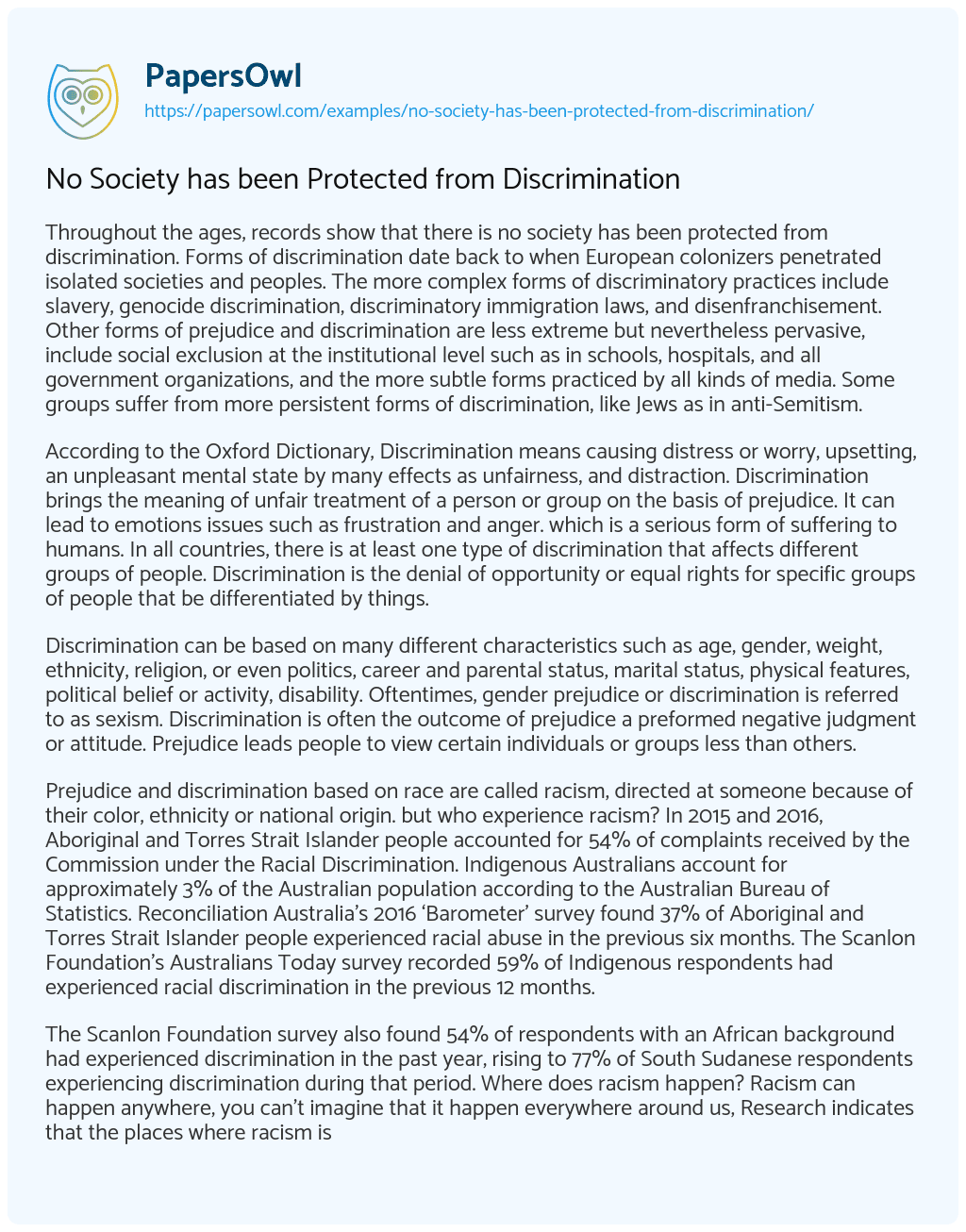 According to the Oxford Dictionary, Discrimination means causing distress or worry, upsetting, an unpleasant mental state by many effects as unfairness, and distraction. Discrimination brings the meaning of unfair treatment of a person or group on the basis of prejudice. It can lead to emotions issues such as frustration and anger. which is a serious form of suffering to humans. In all countries, there is at least one type of discrimination that affects different groups of people. Discrimination is the denial of opportunity or equal rights for specific groups of people that be differentiated by things.

Discrimination can be based on many different characteristics such as age, gender, weight, ethnicity, religion, or even politics, career and parental status, marital status, physical features, political belief or activity, disability. Oftentimes, gender prejudice or discrimination is referred to as sexism. Discrimination is often the outcome of prejudice a preformed negative judgment or attitude. Prejudice leads people to view certain individuals or groups less than others.

Prejudice and discrimination based on race are called racism, directed at someone because of their color, ethnicity or national origin. but who experience racism? In 2015 and 2016, Aboriginal and Torres Strait Islander people accounted for 54% of complaints received by the Commission under the Racial Discrimination. Indigenous Australians account for approximately 3% of the Australian population according to the Australian Bureau of Statistics. Reconciliation Australia’s 2016 ‘Barometer’ survey found 37% of Aboriginal and Torres Strait Islander people experienced racial abuse in the previous six months. The Scanlon Foundation’s Australians Today survey recorded 59% of Indigenous respondents had experienced racial discrimination in the previous 12 months.

The Scanlon Foundation survey also found 54% of respondents with an African background had experienced discrimination in the past year, rising to 77% of South Sudanese respondents experiencing discrimination during that period. Where does racism happen? Racism can happen anywhere, you can’t imagine that it happen everywhere around us, Research indicates that the places where racism is experienced most frequently include in the neighborhoods, shops, workplace, sporting events, public transport, and at schools also we can found it in the media. why racism is problem? Studies show that experiencing racism has profound effects on people’s health and welfare. The effects can include feelings of sadness and anger, even anxiety and depression. The regular experience of racism can lead to people withdrawing from work or study, and diminish their quality of life. It can also hurt people’s freedom and dignity. Those who endure racism can be made to feel they have less freedom, or are second-class citizens. In a diverse country such as Australia, the effects of racism aren’t confined to individuals. It has the potential to affect all of us. Racial hostility creates a society where people don’t trust and respect each other. It challenges our society’s values of equality and fairness.

No Society has been Protected from Discrimination. (2021, Mar 27). Retrieved from https://papersowl.com/examples/no-society-has-been-protected-from-discrimination/

Discrimination has a Role in Humanity

Sexism is Prejudice and Discrimination