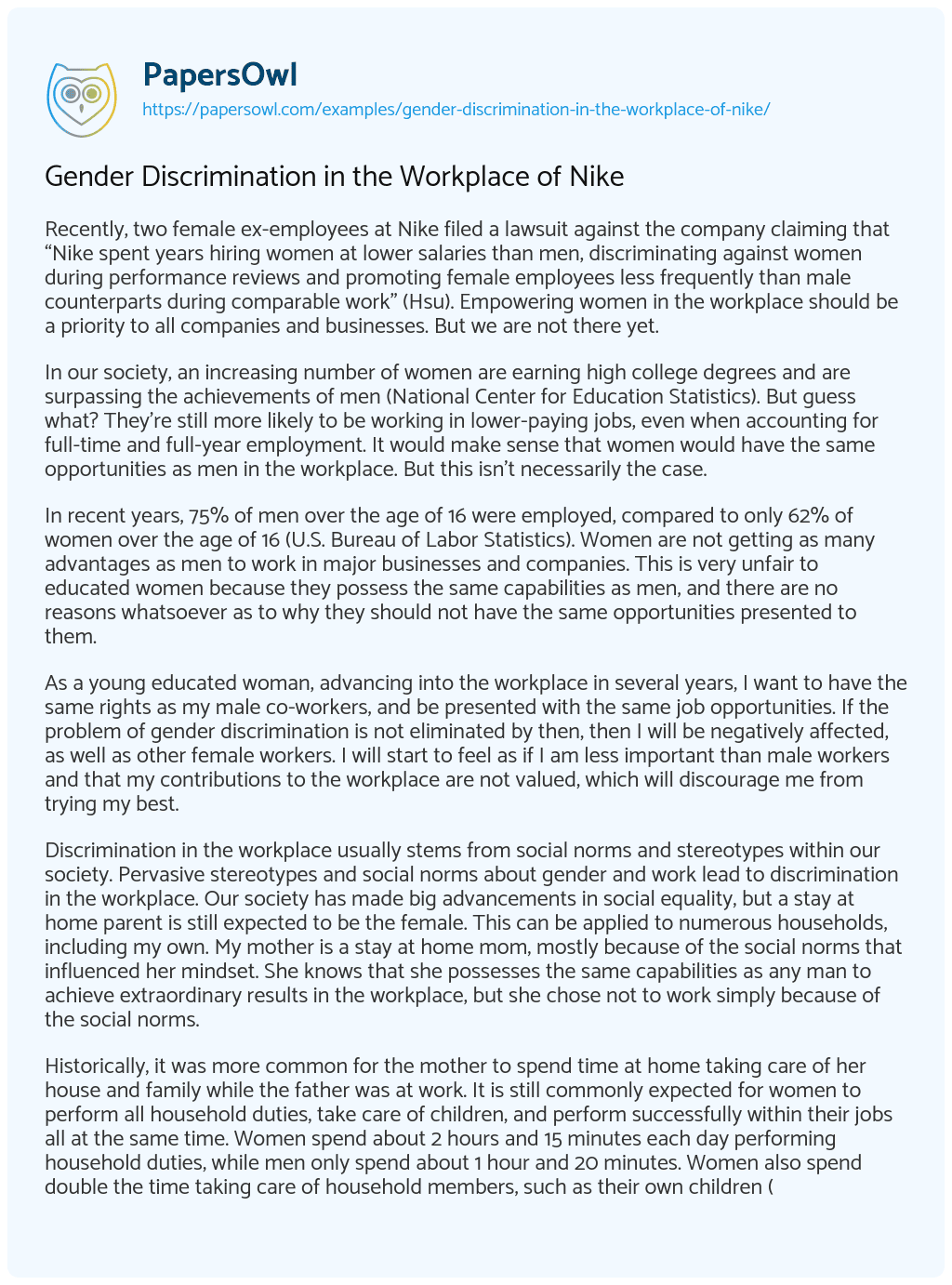 Recently, two female ex-employees at Nike filed a lawsuit against the company claiming that “Nike spent years hiring women at lower salaries than men, discriminating against women during performance reviews and promoting female employees less frequently than male counterparts during comparable work” (Hsu). Empowering women in the workplace should be a priority to all companies and businesses. But we are not there yet.

In our society, an increasing number of women are earning high college degrees and are surpassing the achievements of men (National Center for Education Statistics). But guess what? They’re still more likely to be working in lower-paying jobs, even when accounting for full-time and full-year employment. It would make sense that women would have the same opportunities as men in the workplace. But this isn’t necessarily the case.

In recent years, 75% of men over the age of 16 were employed, compared to only 62% of women over the age of 16 (U.S. Bureau of Labor Statistics). Women are not getting as many advantages as men to work in major businesses and companies. This is very unfair to educated women because they possess the same capabilities as men, and there are no reasons whatsoever as to why they should not have the same opportunities presented to them.

As a young educated woman, advancing into the workplace in several years, I want to have the same rights as my male co-workers, and be presented with the same job opportunities. If the problem of gender discrimination is not eliminated by then, then I will be negatively affected, as well as other female workers. I will start to feel as if I am less important than male workers and that my contributions to the workplace are not valued, which will discourage me from trying my best.

Discrimination in the workplace usually stems from social norms and stereotypes within our society. Pervasive stereotypes and social norms about gender and work lead to discrimination in the workplace. Our society has made big advancements in social equality, but a stay at home parent is still expected to be the female. This can be applied to numerous households, including my own. My mother is a stay at home mom, mostly because of the social norms that influenced her mindset. She knows that she possesses the same capabilities as any man to achieve extraordinary results in the workplace, but she chose not to work simply because of the social norms.

Historically, it was more common for the mother to spend time at home taking care of her house and family while the father was at work. It is still commonly expected for women to perform all household duties, take care of children, and perform successfully within their jobs all at the same time. Women spend about 2 hours and 15 minutes each day performing household duties, while men only spend about 1 hour and 20 minutes. Women also spend double the time taking care of household members, such as their own children (U.S. Bureau of Labor Statistics). Because of this unequal time distribution, most women employees cannot balance their work and personal life.

On the other hand, some people claim that gender inequality is impossible to achieve. Jordan B. Peterson discussed this topic with Cathy Newman from Channel 4 News. During the interview, Peterson argued that the gender inequality in the workplace should not be considered a bad thing and that it should be seen as a reflection of differences between women and men. Peterson explained that “men and women won’t sort themselves into the same categories if you leave alone to do it of their own accord.” This signifies that women and men have different interests, meaning that women naturally choose occupations that pay lower than the occupations men choose. However, as evidence shows, when women and men perform the same job, women still get paid lower than men (U.S. Census).

The first step to eliminate gender discrimination in the workplace needs to be taken by women themselves. This is mainly because we are the ones who have experienced, or will experience, the discrimination. Our voice would have a bigger impact. According to Martin Luther King Jr., “We know through painful experience that freedom is never voluntarily given by the oppressor; it must be demanded by the oppressed.” MLK Jr. was specifically talking about the hardships that African Americans had to face because of discrimination. If they wanted equal rights, then they would need to demand them.

The same solution could be applied to the gender discrimination. Women are able to demand equal rights in the workplace to stop the discrimination against them. It has significant connections to areas such as civil rights, something that should be given to all American citizens, both men and women.

Gender Discrimination in the Workplace of Nike. (2021, May 29). Retrieved from https://papersowl.com/examples/gender-discrimination-in-the-workplace-of-nike/

Gender Discrimination in the Workplace

Sex Based Discrimination in the Modern American Workplace