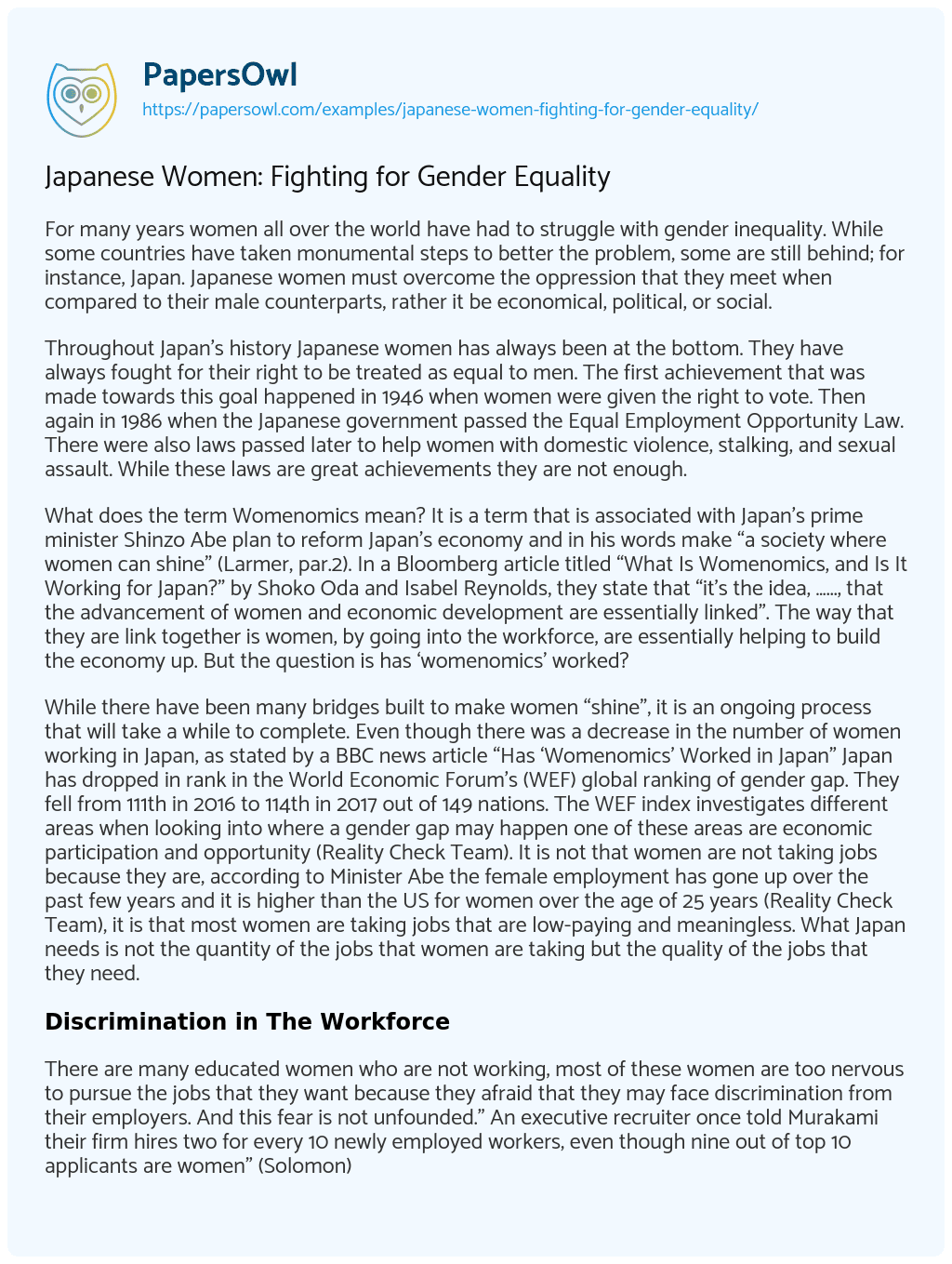 For many years women all over the world have had to struggle with gender inequality. While some countries have taken monumental steps to better the problem, some are still behind; for instance, Japan. Japanese women must overcome the oppression that they meet when compared to their male counterparts, rather it be economical, political, or social.

Throughout Japan’s history Japanese women has always been at the bottom. They have always fought for their right to be treated as equal to men. The first achievement that was made towards this goal happened in 1946 when women were given the right to vote. Then again in 1986 when the Japanese government passed the Equal Employment Opportunity Law. There were also laws passed later to help women with domestic violence, stalking, and sexual assault. While these laws are great achievements they are not enough.

What does the term Womenomics mean? It is a term that is associated with Japan’s prime minister Shinzo Abe plan to reform Japan’s economy and in his words make “a society where women can shine” (Larmer, par.2). In a Bloomberg article titled “What Is Womenomics, and Is It Working for Japan?” by Shoko Oda and Isabel Reynolds, they state that “it’s the idea, ……, that the advancement of women and economic development are essentially linked”. The way that they are link together is women, by going into the workforce, are essentially helping to build the economy up. But the question is has ‘womenomics’ worked?

While there have been many bridges built to make women “shine”, it is an ongoing process that will take a while to complete. Even though there was a decrease in the number of women working in Japan, as stated by a BBC news article “Has ‘Womenomics’ Worked in Japan” Japan has dropped in rank in the World Economic Forum’s (WEF) global ranking of gender gap. They fell from 111th in 2016 to 114th in 2017 out of 149 nations. The WEF index investigates different areas when looking into where a gender gap may happen one of these areas are economic participation and opportunity (Reality Check Team). It is not that women are not taking jobs because they are, according to Minister Abe the female employment has gone up over the past few years and it is higher than the US for women over the age of 25 years (Reality Check Team), it is that most women are taking jobs that are low-paying and meaningless. What Japan needs is not the quantity of the jobs that women are taking but the quality of the jobs that they need.

Discrimination in The Workforce

There are many educated women who are not working, most of these women are too nervous to pursue the jobs that they want because they afraid that they may face discrimination from their employers. And this fear is not unfounded.” An executive recruiter once told Murakami their firm hires two for every 10 newly employed workers, even though nine out of top 10 applicants are women” (Solomon). Many companies are not hiring women because they believe that most women are going to end up leaving the company anyway when they ultimately become pregnant or marry. Due to this many of the women when hired into these companies are not given the same opportunities as their male counterparts. In the article “Womenomics: Mend the Gap” written by Richard Solomon, he writes about a woman, Hiromi Murakami, who had faced this type of bias from her old employers. At her old company many of the male workers were given the opportunity to go into MBA courses and when asked if could also receive this opportunity they decline and offer her something of less value. She left and pursued her educated on her own and later founded the Japan Institute for Social Innovation and Entrepreneurship (JSIE).