People in the LGBT Community should have Equal Rights 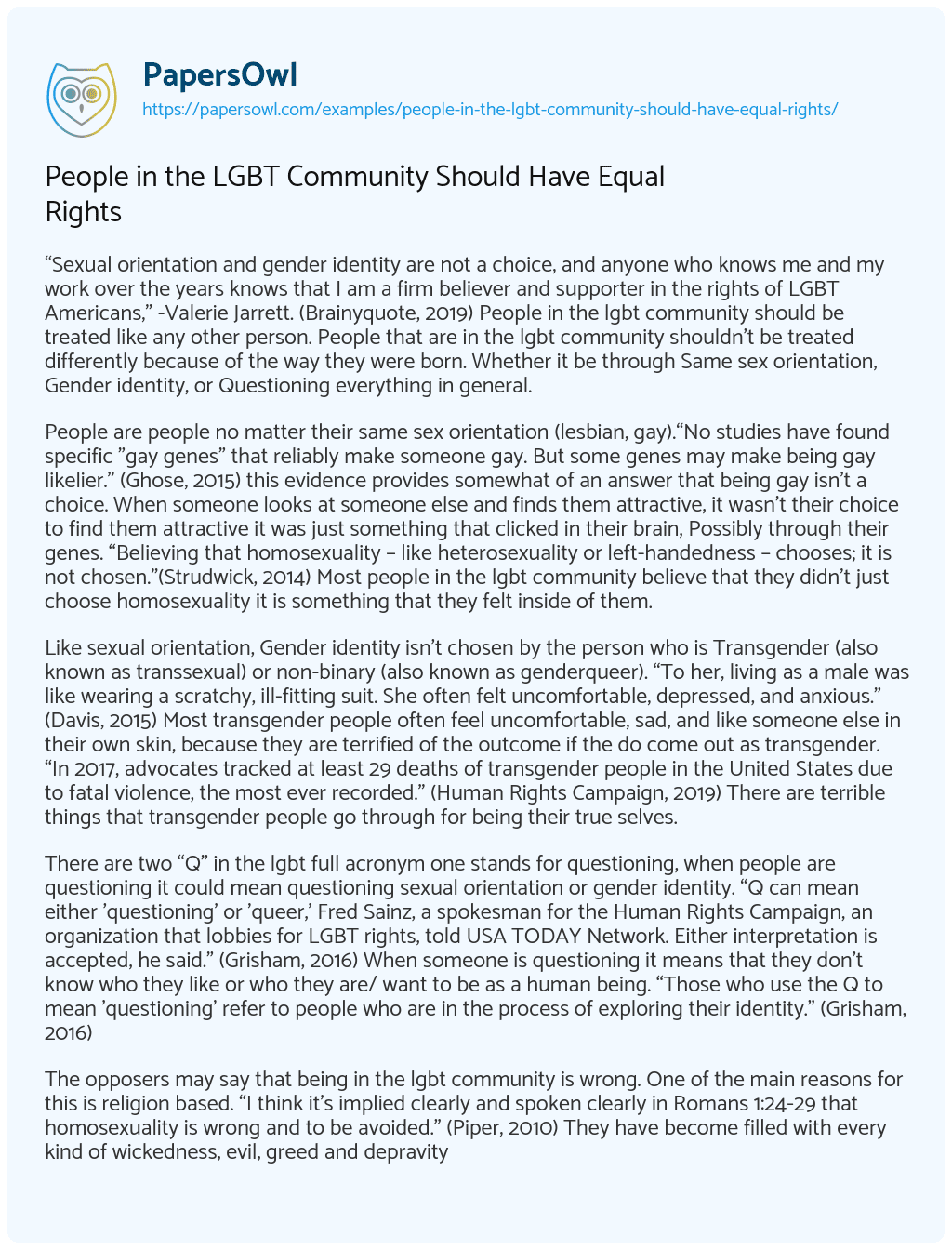 “Sexual orientation and gender identity are not a choice, and anyone who knows me and my work over the years knows that I am a firm believer and supporter in the rights of LGBT Americans,” -Valerie Jarrett. (Brainyquote, 2019) People in the lgbt community should be treated like any other person. People that are in the lgbt community shouldn’t be treated differently because of the way they were born. Whether it be through Same sex orientation, Gender identity, or Questioning everything in general.

People are people no matter their same sex orientation (lesbian, gay).“No studies have found specific “gay genes” that reliably make someone gay. But some genes may make being gay likelier.” (Ghose, 2015) this evidence provides somewhat of an answer that being gay isn’t a choice. When someone looks at someone else and finds them attractive, it wasn’t their choice to find them attractive it was just something that clicked in their brain, Possibly through their genes. “Believing that homosexuality – like heterosexuality or left-handedness – chooses; it is not chosen.”(Strudwick, 2014) Most people in the lgbt community believe that they didn’t just choose homosexuality it is something that they felt inside of them.

Like sexual orientation, Gender identity isn’t chosen by the person who is Transgender (also known as transsexual) or non-binary (also known as genderqueer). “To her, living as a male was like wearing a scratchy, ill-fitting suit. She often felt uncomfortable, depressed, and anxious.” (Davis, 2015) Most transgender people often feel uncomfortable, sad, and like someone else in their own skin, because they are terrified of the outcome if the do come out as transgender. “In 2017, advocates tracked at least 29 deaths of transgender people in the United States due to fatal violence, the most ever recorded.” (Human Rights Campaign, 2019) There are terrible things that transgender people go through for being their true selves.

There are two “Q” in the lgbt full acronym one stands for questioning, when people are questioning it could mean questioning sexual orientation or gender identity. “Q can mean either ‘questioning’ or ‘queer,’ Fred Sainz, a spokesman for the Human Rights Campaign, an organization that lobbies for LGBT rights, told USA TODAY Network. Either interpretation is accepted, he said.” (Grisham, 2016) When someone is questioning it means that they don’t know who they like or who they are/ want to be as a human being. “Those who use the Q to mean ‘questioning’ refer to people who are in the process of exploring their identity.” (Grisham, 2016)

The opposers may say that being in the lgbt community is wrong. One of the main reasons for this is religion based. “I think it’s implied clearly and spoken clearly in Romans 1:24-29 that homosexuality is wrong and to be avoided.” (Piper, 2010) They have become filled with every kind of wickedness, evil, greed and depravity. They are full of envy, murder, strife, deceit and malice.

People in the LGBT Community Should Have Equal Rights. (2019, Dec 13). Retrieved from https://papersowl.com/examples/people-in-the-lgbt-community-should-have-equal-rights/

LGBT Rights: why they Matter