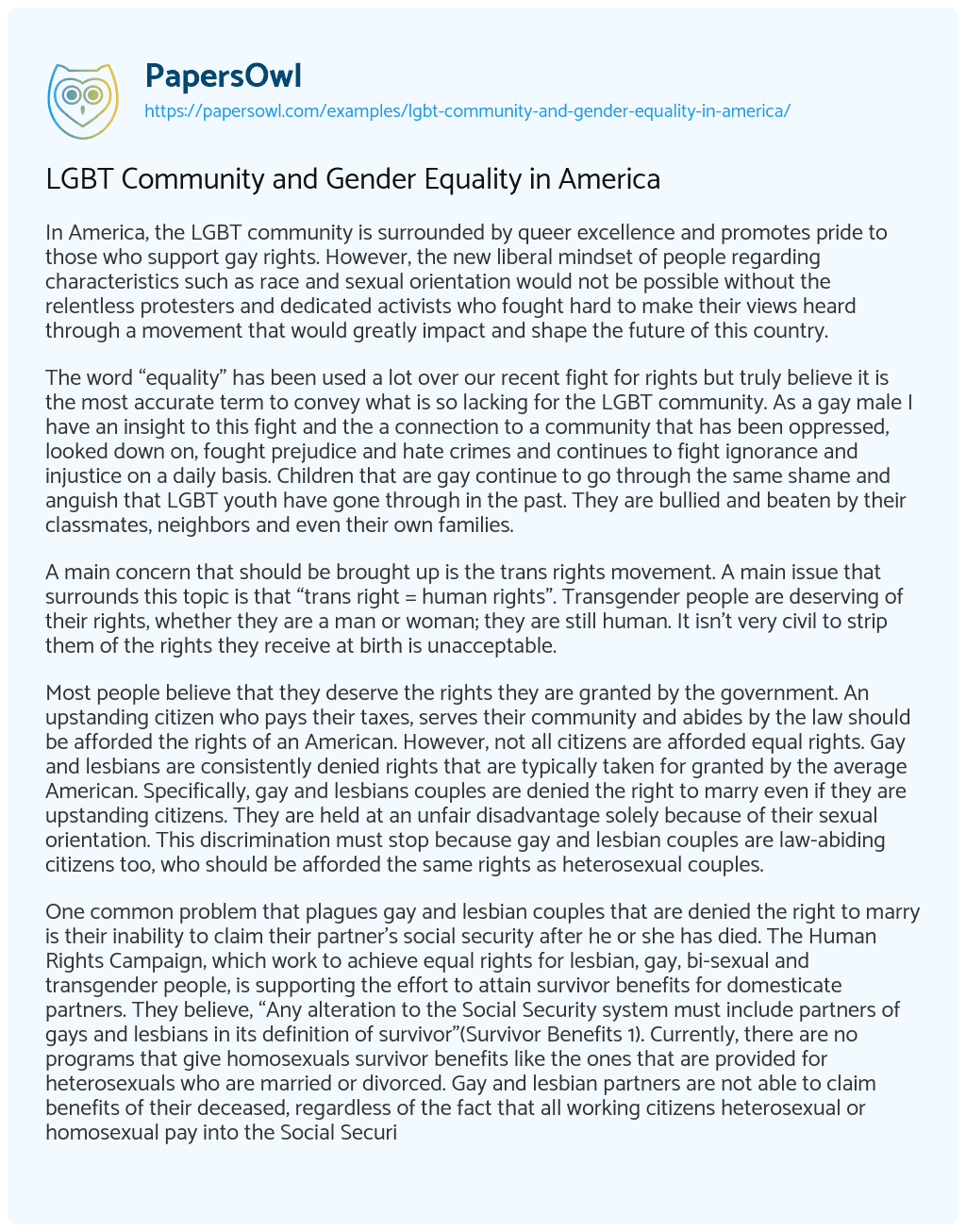 In America, the LGBT community is surrounded by queer excellence and promotes pride to those who support gay rights. However, the new liberal mindset of people regarding characteristics such as race and sexual orientation would not be possible without the relentless protesters and dedicated activists who fought hard to make their views heard through a movement that would greatly impact and shape the future of this country.

The word “equality” has been used a lot over our recent fight for rights but truly believe it is the most accurate term to convey what is so lacking for the LGBT community. As a gay male I have an insight to this fight and the a connection to a community that has been oppressed, looked down on, fought prejudice and hate crimes and continues to fight ignorance and injustice on a daily basis. Children that are gay continue to go through the same shame and anguish that LGBT youth have gone through in the past. They are bullied and beaten by their classmates, neighbors and even their own families.

A main concern that should be brought up is the trans rights movement. A main issue that surrounds this topic is that “trans right = human rights”. Transgender people are deserving of their rights, whether they are a man or woman; they are still human. It isn’t very civil to strip them of the rights they receive at birth is unacceptable.

Most people believe that they deserve the rights they are granted by the government. An upstanding citizen who pays their taxes, serves their community and abides by the law should be afforded the rights of an American. However, not all citizens are afforded equal rights. Gay and lesbians are consistently denied rights that are typically taken for granted by the average American. Specifically, gay and lesbians couples are denied the right to marry even if they are upstanding citizens. They are held at an unfair disadvantage solely because of their sexual orientation. This discrimination must stop because gay and lesbian couples are law-abiding citizens too, who should be afforded the same rights as heterosexual couples.

One common problem that plagues gay and lesbian couples that are denied the right to marry is their inability to claim their partner’s social security after he or she has died. The Human Rights Campaign, which work to achieve equal rights for lesbian, gay, bi-sexual and transgender people, is supporting the effort to attain survivor benefits for domesticate partners. They believe, “Any alteration to the Social Security system must include partners of gays and lesbians in its definition of survivor”(Survivor Benefits 1). Currently, there are no programs that give homosexuals survivor benefits like the ones that are provided for heterosexuals who are married or divorced. Gay and lesbian partners are not able to claim benefits of their deceased, regardless of the fact that all working citizens heterosexual or homosexual pay into the Social Security system for survivor benefits (Survivor Benefits 1). Sadly, this leaves many gay and lesbian couples with an unstable retirement. The most disturbing fact is that even though homosexuals and heterosexual both pay the government for survivor benefits, even people who divorced can even claim survivor benefits whereas a lifelong gay/lesbian partner cannot (Survivor Benefits 1). This is blatant discrimination against people of different sexual orientation. This is only one example of how the government’s refusal to recognize same-sex marriages denies homosexuals rights that are supposedly protected by the state.

The ones who suffer the greatest repercussions of such prejudices are the children of gay and lesbian couples. Non-biological children of gays and lesbians cannot receive survivor benefits if the deceased partner did not legally adopt them. But how is this related to whether or not homosexuals should be allowed to marry? Same-sex couples do have the privilege of adopting children to begin a family of their own. However, they are often rejected because of their unmarried status. Even if the government does not wish to provide some financial security for homosexual couples, it should not punish the children of such relationships. The government directly discriminates against the children of same-sex marriages by not allowing them the same rights as children who have heterosexual parents. Children do not chose who their parents are regardless of your stance on the issue. The Human Rights Campaign has adopted the idea that, “any change must also define survivor to include non-biological children of gays and lesbians found in the changing American family”(Survivor Benefits 2). This is absolutely necessary because it is absurd that innocent children are being denied basic rights due to the sexual orientation of their parents. Death is a painful enough experience; nobody should not have to worry about their financial standings with the government after dealing with the loss of a loved one, let alone, a child. Survivor Benefits must include same-sex unions not only because it denies homosexuals rights that are regularly afforded to heterosexual couples; but because the children of these relationships are being discriminated against as well.

Homosexual’s lack of legal recognition effects them in numerous ways. The argument is much deeper then weather or not they should be married because they live together. If same-sex couples are paying taxes to build roads and help public schools like the heterosexual couples, they should be afforded the same rights. This is the exact argument the gays and lesbians of Vermont are using. In the Baker v. Vermont court case, “gay and lesbian couples had argued that they were denied the protection of more than 300 laws as a result of not being allowed to marry” (Meredith 1). Homosexuals are finally suing the state because they are not receiving protection under the laws of state strictly because they are gay. In fact, the Vermont House of Representatives voted in favor (76-69) of a same-sex civil union bill. This shows that looking at the matter as a legal issue, it is evident that homosexuals are not regarded equally in the eyes of the law, and that the first steps to fix this social injustice are just now being taken; however, the controversy is still obvious as the vote is very close . The Director of Education for the Human Rights campaign state, “It’s a big step in the right direction…while its no full marriage, it’s very close.” Same-sex civil unions are clearing the path for nation-wide legal recognition of same-sex relationships. These same-sex civil marriages are demonstrating that the concept of “marriage” and the rights an American deserves, regardless of gender, race or sexual orientation, can be simultaneously respected. The fight is for gay and lesbian couples to gain legal recognition, not religious recognition.

Even most people against same-sex marriages agree that they do not hate gays they just disagree with their lifestyle because of their religious beliefs and church affiliation. The battle to legalize same-sex civil unions is not trying to infringe upon the beliefs of the churches. These unions are to be recognized by the state, not by all churches. Priests do not have to perform these ceremonies, nor do they have to be held in a church. It would be unfair for the government to decide in what people should and should not believe, this would be an infringement upon our right to freedom of religion. However, this does not give the government the right to discriminate against gay and lesbian couples in the eyes of the law because the government and religious beliefs are supposed to be separate. Weather same-sex civil unions should be recognized legally is not a religious question. This is a debate over whether or not people of different sexual orientation are to be viewed equally in the eyes of the government, and will be accepted into mainstream America.

However, some people argue that same-sex marriage would be tolerable if they were confined to their own communities. That way the general public would not be “subjected” to their practices. Gay people are not lepers. We can not isolate a faction of the population and force them to live in designated areas. This idea parallels the concept of moving all the Native Americans onto reservations. Thinking such as this is archaic and regresses back to another closely related idea: segregation. Do people really want to repeat one of the largest social injustices of American history? As established by the segregation trials during the 1960’s and 1970’s, separate but equal is not equal. It creates a division and a difference.

The trials that are now finally questioning the treatment of gay and lesbian couples are easily compared to those of inter-racial marriages. One example is the famous case of Loving vs. Virginia. In this case, a white man and black woman were married in Washington D.C., however, their home state of Virginia fused to recognize the marriage and exiled them for twenty years. Later when they took the state of Virginia to court it was decided that they could not be denied the right to live where they pleased due to their inter-racial marriage (Oyez 1). This court decision is arguably one of the strongest forces in nation-wide legal recognition of inter-racial marriages. It is evident that the same-sex civil unions that are now being recognized in Vermont are slowly making the way for other states to join the movement. The Baker vs. Vermont case is a strong reminder of the troubles America once faced. Separate but equal is inherently unequal and unfair.

Therefore, it is necessary to set aside religious issues to look at this debate from a legal standpoint. It is necessary that the government recognize the civil unions of same sex couples because all citizens of the United States should be afforded equal rights regardless of race, gender or sexual orientation. It is because of this legal discrimination that homosexuals are denied such rights as hospital visitation, socials security and disability insurances. Discrimination is wrong. The first step in correcting social injustice must be taken soon. The issue of legal marriage between two people of the same- sex must be settled now to stop the discrimination that is openly occurring across America.