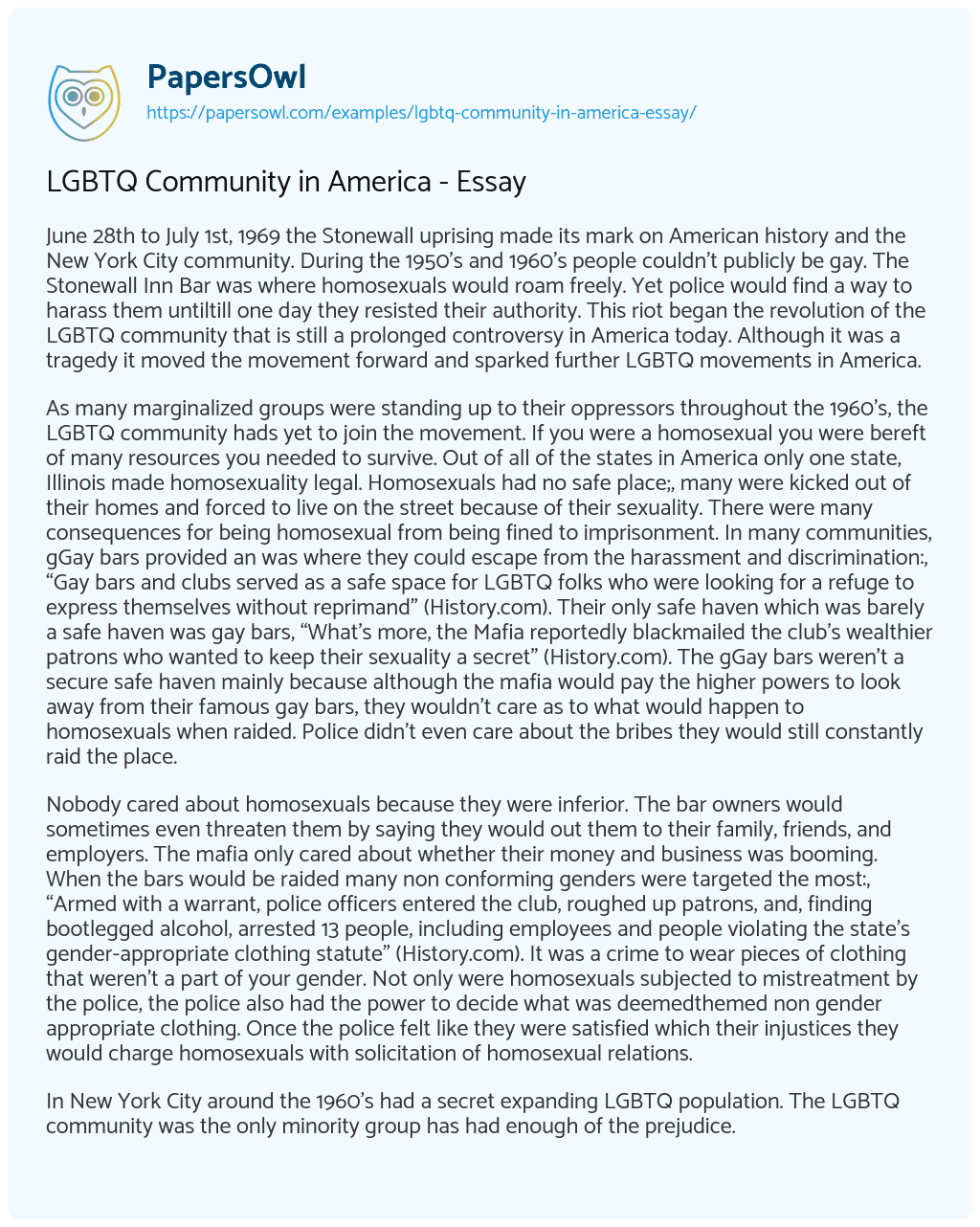 June 28th to July 1st, 1969 the Stonewall uprising made its mark on American history and the New York City community. During the 1950’s and 1960’s people couldn’t publicly be gay. The Stonewall Inn Bar was where homosexuals would roam freely. Yet police would find a way to harass them untiltill one day they resisted their authority. This riot began the revolution of the LGBTQ community that is still a prolonged controversy in America today. Although it was a tragedy it moved the movement forward and sparked further LGBTQ movements in America.

As many marginalized groups were standing up to their oppressors throughout the 1960’s, the LGBTQ community hads yet to join the movement. If you were a homosexual you were bereft of many resources you needed to survive. Out of all of the states in America only one state, Illinois made homosexuality legal. Homosexuals had no safe place;, many were kicked out of their homes and forced to live on the street because of their sexuality. There were many consequences for being homosexual from being fined to imprisonment. In many communities, gGay bars provided an was where they could escape from the harassment and discrimination:, “Gay bars and clubs served as a safe space for LGBTQ folks who were looking for a refuge to express themselves without reprimand” (History.com). Their only safe haven which was barely a safe haven was gay bars, “What’s more, the Mafia reportedly blackmailed the club’s wealthier patrons who wanted to keep their sexuality a secret” (History.com). The gGay bars weren’t a secure safe haven mainly because although the mafia would pay the higher powers to look away from their famous gay bars, they wouldn’t care as to what would happen to homosexuals when raided. Police didn’t even care about the bribes they would still constantly raid the place.

Nobody cared about homosexuals because they were inferior. The bar owners would sometimes even threaten them by saying they would out them to their family, friends, and employers. The mafia only cared about whether their money and business was booming. When the bars would be raided many non conforming genders were targeted the most:, “Armed with a warrant, police officers entered the club, roughed up patrons, and, finding bootlegged alcohol, arrested 13 people, including employees and people violating the state’s gender-appropriate clothing statute” (History.com). It was a crime to wear pieces of clothing that weren’t a part of your gender. Not only were homosexuals subjected to mistreatment by the police, the police also had the power to decide what was deemedthemed non gender appropriate clothing. Once the police felt like they were satisfied which their injustices they would charge homosexuals with solicitation of homosexual relations.

In New York City around the 1960’s had a secret expanding LGBTQ population. The LGBTQ community was the only minority group has had enough of the prejudice. One early morning June 28th, the beginning of the awareness for homosexuals. The Stonewall Inn bar in Greenwich Village was raided by the NYPD, “Armed with a warrant, police officers entered the club, roughed up patrons, and, finding bootlegged alcohol, arrested 13 people, including employees and people violating the state’s gender-appropriate clothing statute” (History.com). Along with raiding the place they utilized their weapon of violence on many people in the bar when it was not necessary.

After years of remaining hidden, vulnerable, and subjected to harsh treatment the LGBTQ community offically had enough. The ultimate turning point was when a lesbian was being roughed up by the police and she looked at many other in the bar and said are any of you going to do anything. The despotism of the New York City police had stimulated the aggressive reaction where she, “shouted to onlookers to act, inciting the crowd to begin to throw pennies, bottles, cobblestones, and other objects at the police” (History.com). As the police exit the bar arresting many homosexuals, they encounter hundreds of people apart of the LGBTQ community. It was a chaotic, emotional, forceful riot, where they finally wanted to be free to be who they truly were.

There were people running wild throwing rocks at the NYPD, screaming things like “I have my civil rights too”, and people being brutally assaulted. Many people of the LGBTQ community called their homosexual friends and would encourage them to hurry off to the Stonewall Inn to witness the first step towards Gay Liberation. People were shoving police into the bar, as a blockade. No amount of police backup was enough compared to the thousands of gay people fighting for their rights. One image Jerry Hoose a Stonewall Rebellion Veteran won’t ever forget was when a line of drag queens were doing the rocket kick line singing, “We are the Stonewall girls, We wear our hair in curls, We wear no underwear, We show our pubic hair, We wear our dungarees, Above our nelly knees!” (Stonewall: Profiles of Pride)

The pivotal moment of the Stonewall Rebellion was enacted by many different people who played three different roles. The victims who are harmed, killed, or injured. The perpetrators who commit illegal, heinous, and deleterious acts. Lastly, the bystanders who are witnessing an incident but play no part in it. Two important victims were Malcolm Michaels Jr. and Ray Rivera, drag queens who would always go to the Stonewall Inn to transform into Marsha P. Johnson and Sylvia Rivera. Their significance on the event was that they would give homes to homosexuals on the street. They were ones to look at when it came to a homosexual role model because of their courageous acts like when “ they co-founded the Street Transvestite Action Revolutionaries (STAR) and they became fixtures in the community, especially in their commitment to helping homeless transgender youth in NYC” (Biography.com).

They fearlessly stood up for themselves and their sexuality. Letting no police or human deprive them of their true identity. As victims they got most of the attention before, during, and after the rebellion. Marsha P. Johnson’s role through the perspective of many other homosexuals was a victim, “The police initially ruled her death a suicide despite claims from her friends and other members of the local community that she was not suicidal” ((Biography.com). Many homosexuals and friends may view her as a victim because of the injustices and lack of rights she had compared to straight people. Her case was believed to not be punctiliously investigated because of her sexuality, she wasn’t given a fair investigation although she should’ve due to civil rights. She didn’t receive a fair investigation because she was a homosexual and a victim. But let’s not forget we need to involve the other perspectives. In the eyes of the higher authority who eagerly wanted to get rid of the LGBTQ community, Marsha P. Johnson and others just like her were seen as perpetrators. In the eyes of the NYPD they were simply trying to do their job.

Being openly gay was illegal and they were just trying to do their jobs would be their claim. Yet a gay person’s claim was that they weren’t doing their job the right way because police would constantly “turn violent after a few LGBT people were arrested on questionable charges, handcuffed, and very publicly forced into police cars on the streets of NYC” (Biography.com). Meanwhile we have Bystanders, although we cannot specifically name who they were they played just as an important role as the victims and perpetrators. Bystanders are known for “minding their business” during consequential events. The Stonewall Rebellion had many eyewitness throughout the riot that lasted 7 days.

Homosexuals would observe the bystanders who knew about the crimes that should’ve been brought to justice and would do nothing. Although they were in the known because they were “eyewitnesses that have identified Marsha P. Johnson as one of the main instigators of the uprising” (Biography.com). They wouldn’t support the protest for the lack of gay rights. Many voices compared to one makes a bigger impact and the LGBTQ community needed all the support they could get. Perpetrators would view bystanders as those who aren’t supporting the riot which is a positive but if they aren’t helping to reduce the population of gays then it was a negative for them. Different perspectives plays a major role because it reveals the truth about the event and personal motives of the victims, perpetrators, and bystanders.

The Stonewall Inn was a successful uprising of the LGBTQ community, although it was grueling and difficult task for homosexuals to adopt because they already had to take on the burden on being discriminated, it ended up being worth it at the end. The Stonewall Rebellion was crucial step towards the Gay Liberation Movement because it paved the way for many other LGBTQ events. Not only did the riot enact a change the change began a year after the event “two gay rights organizations were formed, and in 1970 several gay pride parades took place in major cities around the country” (baruch.cuny.edu). The US even celebrates Gay Pride annually now in NYC “on the last Sunday of June, It is one of the most heavily participated and attended parades in New York, exceeded only by the St. Patrick’s Day parade.

The Stonewall event marked the beginning of the nationwide Gay Pride movement” (baruch.cuny.edu). Homosexuality is no longer illegal, Same sex marriage is now legal throughout all of the US, and adoption rights for gay couple are now equal. The LGBTQ community has recieved the acknowledgement they been searching for for years, “the site was added to the U.S. National Register of Historic Places on June 28th, 1999, the 30th anniversary of the riots. On February 16, 2000, the Stonewall Inn became a National Historic Landmark” (Pbs.org). The US is now becoming more aware about the gay community and their needs and their significance. This all began with the first step towards gay liberation nobly remembered as the Stonewall Rebellion, Uprising, Riot, Protest, etc.

In Conclusion, our society now aware of the existence of homosexuals and their civil rights. They have secure places to be their true selves where they aren’t oppressed, discriminated, or marginalized. We now have secure laws to protect these homosexuals from ever enduring the sufferment they did with the NYPD in the 1960’s. Although there are still issues that America can work on to make sure every homosexual is truthfully safe we have improved and grown as a community. June 28th, 1969 the birth of homophobic evolution, the Stonewall victims, perpetrators, and bystanders will be highly esteemed and valued through American history.

Oppression in the LGBTQ Community

LGBTQ in America and Iran