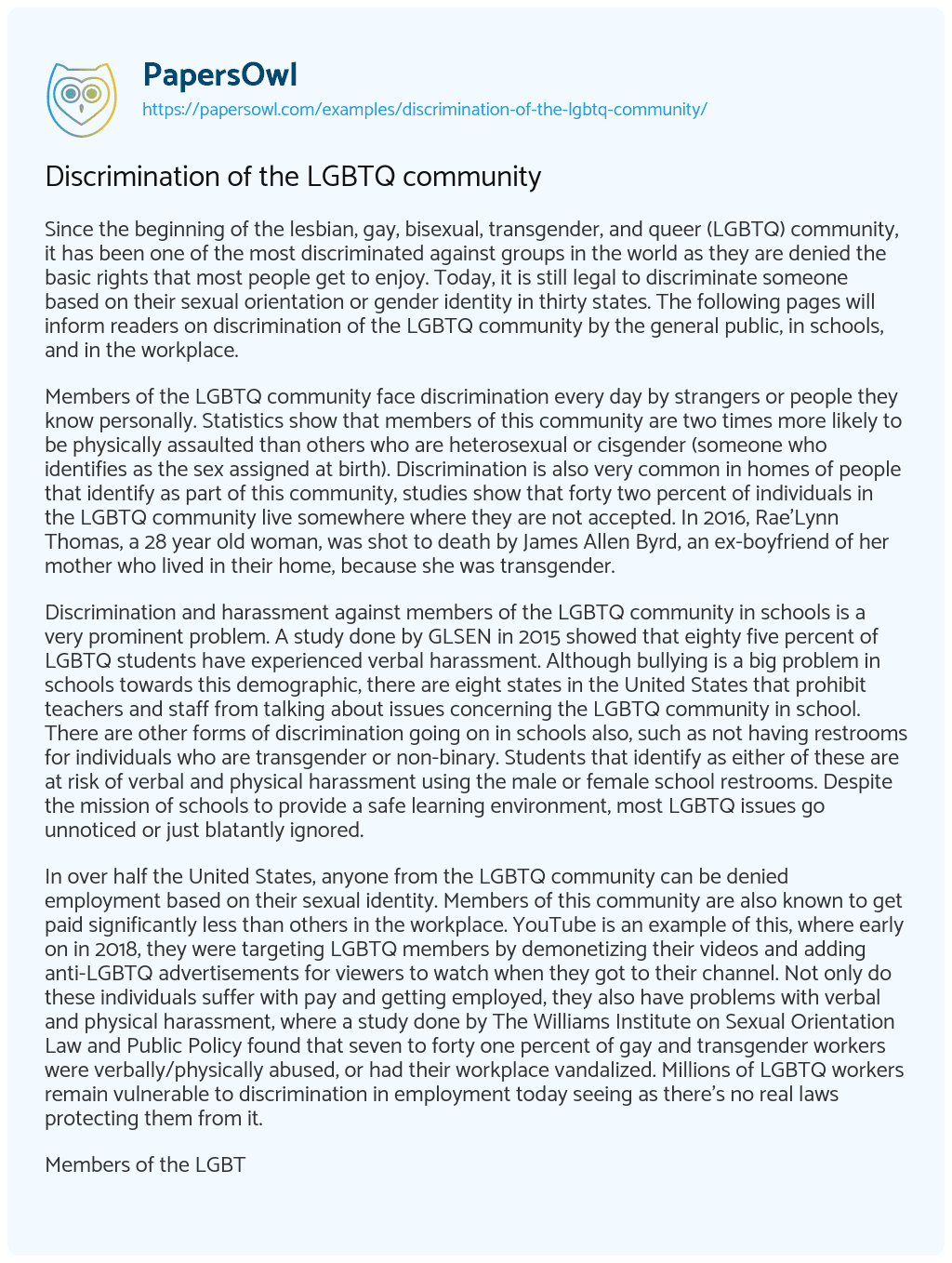 Since the beginning of the lesbian, gay, bisexual, transgender, and queer (LGBTQ) community, it has been one of the most discriminated against groups in the world as they are denied the basic rights that most people get to enjoy. Today, it is still legal to discriminate someone based on their sexual orientation or gender identity in thirty states. The following pages will inform readers on discrimination of the LGBTQ community by the general public, in schools, and in the workplace.

Members of the LGBTQ community face discrimination every day by strangers or people they know personally. Statistics show that members of this community are two times more likely to be physically assaulted than others who are heterosexual or cisgender (someone who identifies as the sex assigned at birth). Discrimination is also very common in homes of people that identify as part of this community, studies show that forty two percent of individuals in the LGBTQ community live somewhere where they are not accepted. In 2016, Rae’Lynn Thomas, a 28 year old woman, was shot to death by James Allen Byrd, an ex-boyfriend of her mother who lived in their home, because she was transgender.

Discrimination and harassment against members of the LGBTQ community in schools is a very prominent problem. A study done by GLSEN in 2015 showed that eighty five percent of LGBTQ students have experienced verbal harassment. Although bullying is a big problem in schools towards this demographic, there are eight states in the United States that prohibit teachers and staff from talking about issues concerning the LGBTQ community in school. There are other forms of discrimination going on in schools also, such as not having restrooms for individuals who are transgender or non-binary. Students that identify as either of these are at risk of verbal and physical harassment using the male or female school restrooms. Despite the mission of schools to provide a safe learning environment, most LGBTQ issues go unnoticed or just blatantly ignored.

In over half the United States, anyone from the LGBTQ community can be denied employment based on their sexual identity. Members of this community are also known to get paid significantly less than others in the workplace. YouTube is an example of this, where early on in 2018, they were targeting LGBTQ members by demonetizing their videos and adding anti-LGBTQ advertisements for viewers to watch when they got to their channel. Not only do these individuals suffer with pay and getting employed, they also have problems with verbal and physical harassment, where a study done by The Williams Institute on Sexual Orientation Law and Public Policy found that seven to forty one percent of gay and transgender workers were verbally/physically abused, or had their workplace vandalized. Millions of LGBTQ workers remain vulnerable to discrimination in employment today seeing as there’s no real laws protecting them from it.

Members of the LGBTQ community get discriminated against every day by the general public, in schools, and in the workplace. Although the United States is about freedom and rights, there are laws missing to protect members of this community against discrimination and hate crimes in all different types of environments.

Discrimination of the LGBTQ community. (2019, Oct 25). Retrieved from https://papersowl.com/examples/discrimination-of-the-lgbtq-community/

Types of Discrimination Exists in the Diverse LGBTQ Community

Discrimination of the Gay Community