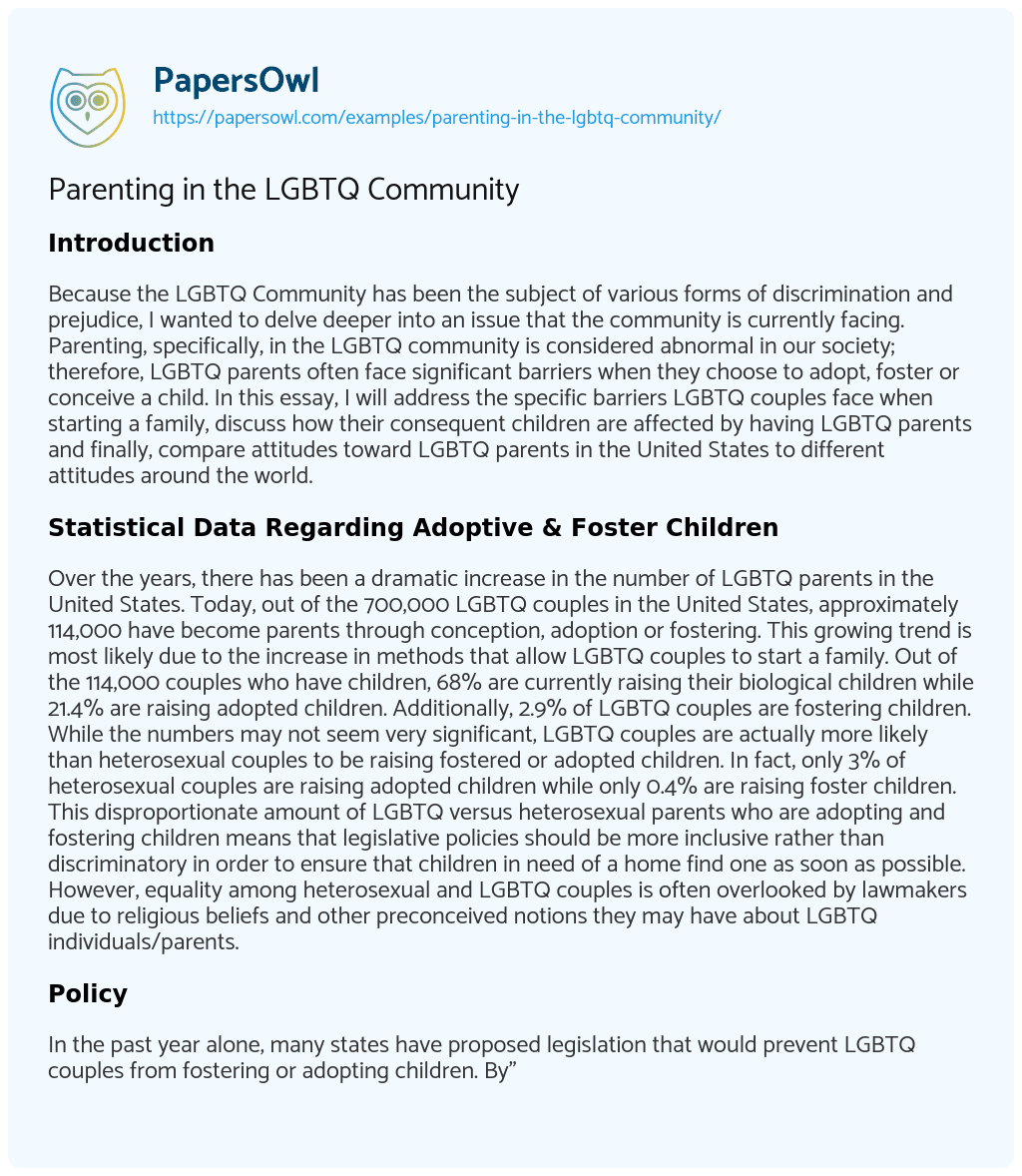 Because the LGBTQ Community has been the subject of various forms of discrimination and prejudice, I wanted to delve deeper into an issue that the community is currently facing. Parenting, specifically, in the LGBTQ community is considered abnormal in our society; therefore, LGBTQ parents often face significant barriers when they choose to adopt, foster or conceive a child. In this essay, I will address the specific barriers LGBTQ couples face when starting a family, discuss how their consequent children are affected by having LGBTQ parents and finally, compare attitudes toward LGBTQ parents in the United States to different attitudes around the world.

Over the years, there has been a dramatic increase in the number of LGBTQ parents in the United States. Today, out of the 700,000 LGBTQ couples in the United States, approximately 114,000 have become parents through conception, adoption or fostering. This growing trend is most likely due to the increase in methods that allow LGBTQ couples to start a family. Out of the 114,000 couples who have children, 68% are currently raising their biological children while 21.4% are raising adopted children. Additionally, 2.9% of LGBTQ couples are fostering children. While the numbers may not seem very significant, LGBTQ couples are actually more likely than heterosexual couples to be raising fostered or adopted children. In fact, only 3% of heterosexual couples are raising adopted children while only 0.4% are raising foster children. This disproportionate amount of LGBTQ versus heterosexual parents who are adopting and fostering children means that legislative policies should be more inclusive rather than discriminatory in order to ensure that children in need of a home find one as soon as possible. However, equality among heterosexual and LGBTQ couples is often overlooked by lawmakers due to religious beliefs and other preconceived notions they may have about LGBTQ individuals/parents.

In the past year alone, many states have proposed legislation that would prevent LGBTQ couples from fostering or adopting children. By”

Parenting in the LGBTQ Community. (2021, May 22). Retrieved from https://papersowl.com/examples/parenting-in-the-lgbtq-community/

LGBTQ Parents: their Hardships and Heteronormativity

Types of Discrimination Exists in the Diverse LGBTQ Community