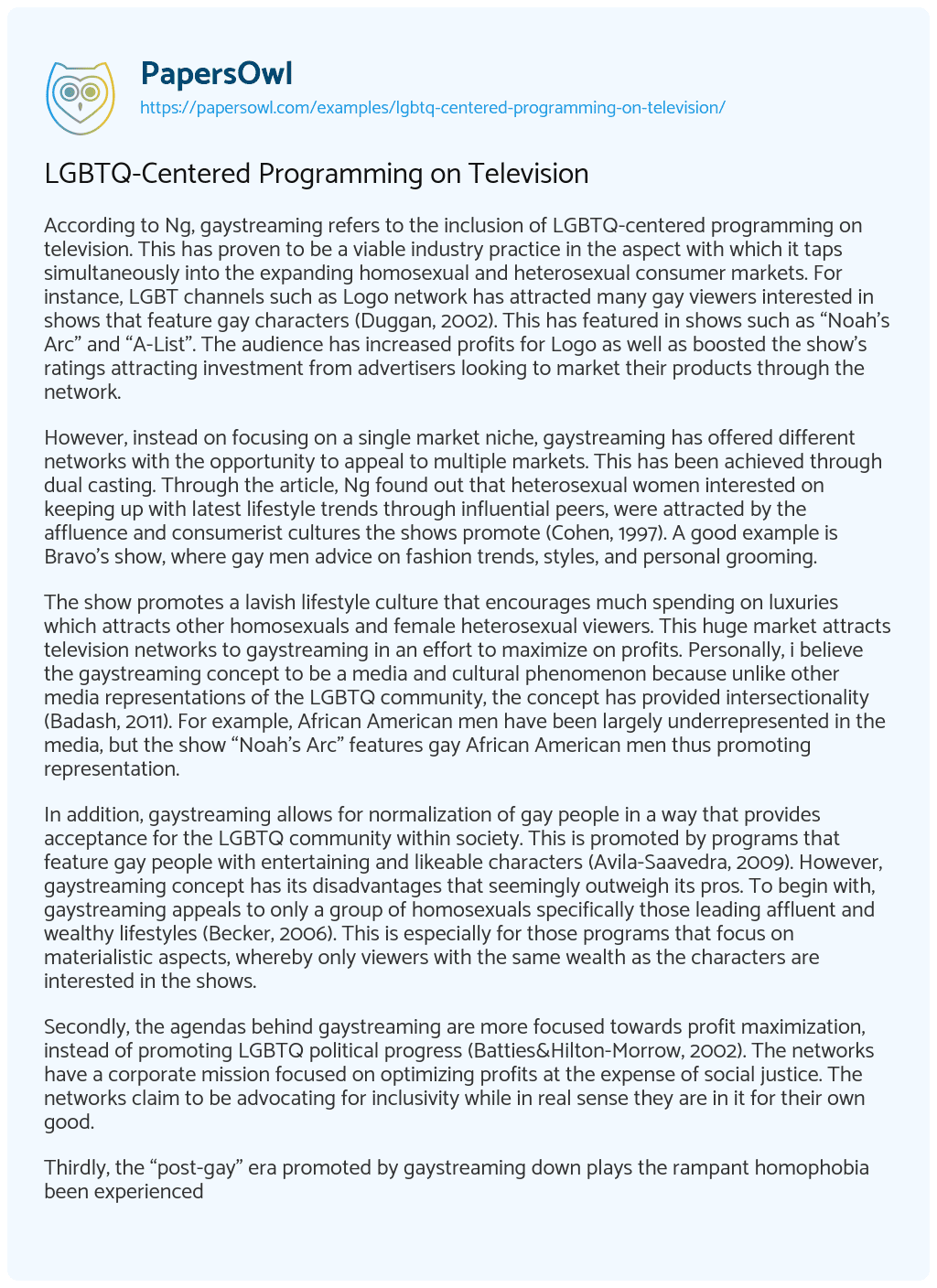 According to Ng, gaystreaming refers to the inclusion of LGBTQ-centered programming on television. This has proven to be a viable industry practice in the aspect with which it taps simultaneously into the expanding homosexual and heterosexual consumer markets. For instance, LGBT channels such as Logo network has attracted many gay viewers interested in shows that feature gay characters (Duggan, 2002). This has featured in shows such as “Noah’s Arc” and “A-List”. The audience has increased profits for Logo as well as boosted the show’s ratings attracting investment from advertisers looking to market their products through the network.

However, instead on focusing on a single market niche, gaystreaming has offered different networks with the opportunity to appeal to multiple markets. This has been achieved through dual casting. Through the article, Ng found out that heterosexual women interested on keeping up with latest lifestyle trends through influential peers, were attracted by the affluence and consumerist cultures the shows promote (Cohen, 1997). A good example is Bravo’s show, where gay men advice on fashion trends, styles, and personal grooming.

The show promotes a lavish lifestyle culture that encourages much spending on luxuries which attracts other homosexuals and female heterosexual viewers. This huge market attracts television networks to gaystreaming in an effort to maximize on profits. Personally, i believe the gaystreaming concept to be a media and cultural phenomenon because unlike other media representations of the LGBTQ community, the concept has provided intersectionality (Badash, 2011). For example, African American men have been largely underrepresented in the media, but the show “Noah’s Arc” features gay African American men thus promoting representation.

In addition, gaystreaming allows for normalization of gay people in a way that provides acceptance for the LGBTQ community within society. This is promoted by programs that feature gay people with entertaining and likeable characters (Avila-Saavedra, 2009). However, gaystreaming concept has its disadvantages that seemingly outweigh its pros. To begin with, gaystreaming appeals to only a group of homosexuals specifically those leading affluent and wealthy lifestyles (Becker, 2006). This is especially for those programs that focus on materialistic aspects, whereby only viewers with the same wealth as the characters are interested in the shows.

Secondly, the agendas behind gaystreaming are more focused towards profit maximization, instead of promoting LGBTQ political progress (Batties&Hilton-Morrow, 2002). The networks have a corporate mission focused on optimizing profits at the expense of social justice. The networks claim to be advocating for inclusivity while in real sense they are in it for their own good.

Thirdly, the “post-gay” era promoted by gaystreaming down plays the rampant homophobia been experienced by many homosexuals and heterosexuals in the community today. The real agenda is masked at the expense of maximizing profit which affects the LGBTQ community negatively (Badash, 2011). For instance, the show Project Runway as evident in this preview, (http://www.youtube.com/watch?v=H5BzI1fwrNM) features gay fashion designers in a high fashion programming. Like other gaystreaming programs, it attracts affluent homosexuals and heterosexual audience (Duggan, 2002). This is appreciated by viewers with the ability to purchase high-end fashion outfits such as those promoted in the show. The designers and other gay characters featured in these shows are seen to contribute to society through fashion where they are viewed as “good” by the society. However, Ng in the article mentions that this normalization and acceptance of individuals, marginalizes the entire LGBTQ community especially those who lack the ability to participate in the affluent consumerism culture (Cohen, 1997). This demonstrates not only the viability of gaystreaming for networks, but also how it can be counterproductive to advance political social justice agendas pertaining to the LGBTQ community.

Though gaystreaming has signified gains for both LGBT viewers and the media as whole, many in the LGBTQ community feel like much of the content aired in this programs are more centered on chronicles of coming out and acceptance at the expense of more entertaining stories (Becker, 2006). More broadly, the persistent themes that have been dominant in the LGBTQ community such as clustering in “ghettos” are gradually eroding. According to a comment by Marc Leonard the gay audiences are incorporating in society, moving to the suburbs where they interact with straight friends, and are raising families basically leading normal lives.

Logo’s Executive Vice President Lisa Sherman, attributes this outcome to an audience seeking media content that best reflects their integration into the society (Cohen, 1997). The idea of “gay-ghettos” has long been a misrepresentation of LGBT people creating a perception of them cluttered in urban settings while in actual sense they have always lived and continue living in the suburbs.

Logo network creates diverse content indiscriminately to avoid the assumption that all LGBT people can be categorized into groups according to their tastes and preferences of media content. The network has established different sections that cater for multiple groups of people in the LGBTQ community (Avila-Saavedra, 2009). According to a comment made by Gorelick, a marketing executive at Logo suggests that traditional labels in terms of sexuality are shifting as we enter the “post-gay era”. The terms gay, lesbian and queer have been foregone in an effort to emphasize sameness and assimilation in many organizations that involve discussions about LGBT people.

However, even though the millennials are resistant to these traditional sexuality labels, the post-gay term fails to express the fluidity in gender and sexual representation (Betties& Hamilton-Morrow, 2002). The significant decline of homophobia in American society as portrayed in mainstream media, fails to address the rejection expressed through hate crimes, and sexuality-based bullying in schools. Gaystreaming reinforces the perception of the “good” gay, where for example Logo network creates a stereotypic perception of gays as affluent consumers and highly brand loyal (Badash, 2011). This is supported by comments of former Logo executive Kristen Frank about the audience being “indexes higher in income, indexes higher in education, indexes higher in discretionary spending, indexes higher in loyalty”.

Gaystreaming market niche is shifting from specificity-focused LGBT content to mainstream programming with LGBT content blended in it. According to the marketing executive, the niche market is shrinking whereby inclusive content is being produced in print, film and television (Duggan, 2002). This has led to a need for the network to establish new rebranding strategies to spar growth and ensure smooth adjustments as the market niche shrinks further. The former executive likened the situation to that of hip-hop’s popularity when it first served as an entertainment niche but later evolved to accommodate interests of an expanded group of people.

In conclusion, Logo network’s gaystreaming concept comes at a time when LGBT specificities are undesirable and political progress in LGBTQ community agenda in social justice is influenced by homonormative representation in mainstream media. The mainstream discussion of LGBT people in the cultural domain provides focus towards integration and also garners the much needed support against violence and injustice. The internet serves as a more hospitable platform through which diverse material can be aired. This explains the increasing number of ongoing acquisitions and mergers of websites, focused towards gaystreaming content. In some cases, these series are funded by viewers seeking content that is not available in mainstream media enables producers of this programs to express narratives that would not be aired on commercial networks such as Logo. The responsibility falls on producers and creators of queer media content to invest both of their resources and creative energies towards creating content that connects with their audiences.

Acceptability of LGBTQ through Performativity

Stereotyping Genders in the LGBT Community over Television