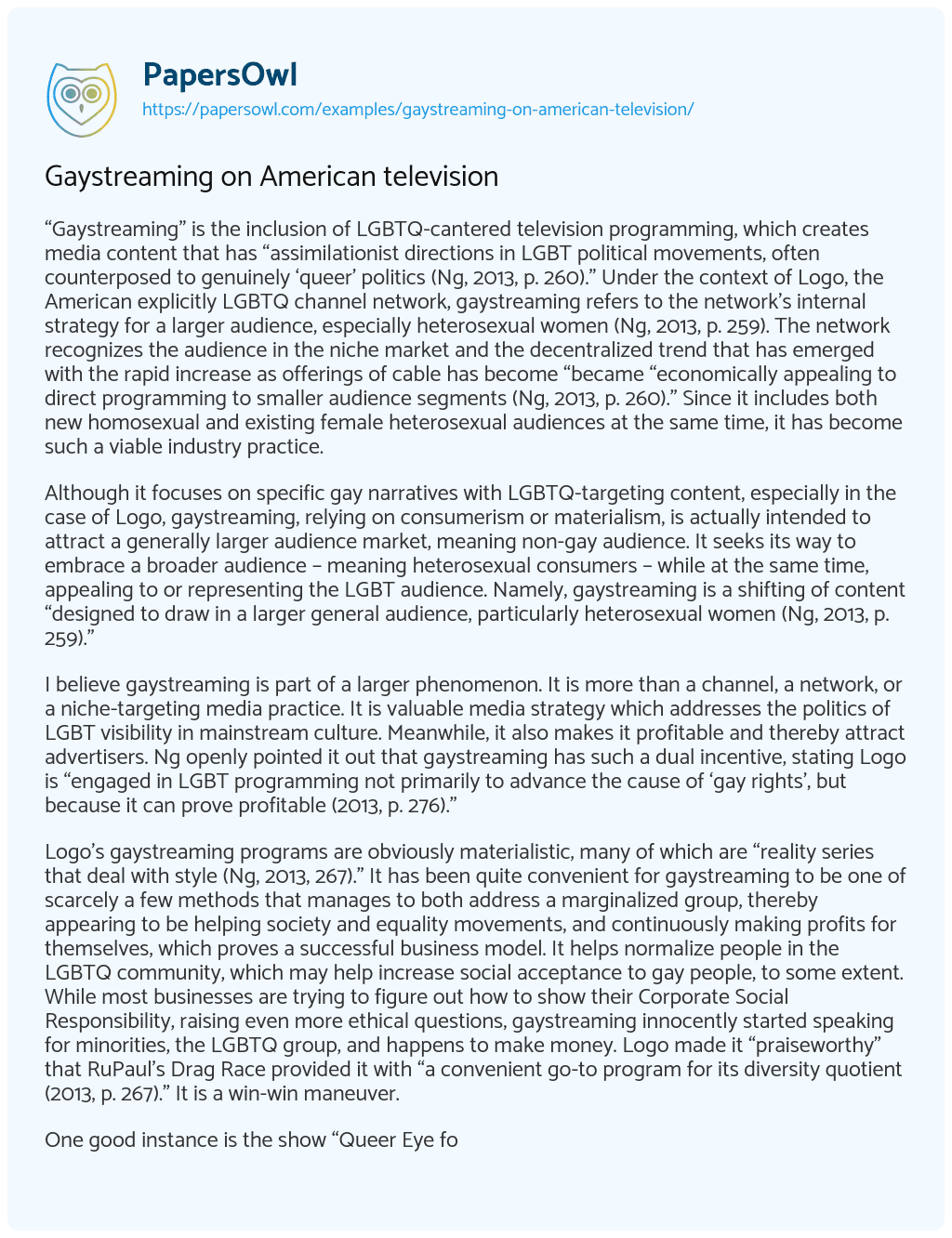 “Gaystreaming” is the inclusion of LGBTQ-cantered television programming, which creates media content that has “assimilationist directions in LGBT political movements, often counterposed to genuinely ‘queer’ politics (Ng, 2013, p. 260).” Under the context of Logo, the American explicitly LGBTQ channel network, gaystreaming refers to the network’s internal strategy for a larger audience, especially heterosexual women (Ng, 2013, p. 259). The network recognizes the audience in the niche market and the decentralized trend that has emerged with the rapid increase as offerings of cable has become “became “economically appealing to direct programming to smaller audience segments (Ng, 2013, p. 260).” Since it includes both new homosexual and existing female heterosexual audiences at the same time, it has become such a viable industry practice.

Although it focuses on specific gay narratives with LGBTQ-targeting content, especially in the case of Logo, gaystreaming, relying on consumerism or materialism, is actually intended to attract a generally larger audience market, meaning non-gay audience. It seeks its way to embrace a broader audience – meaning heterosexual consumers – while at the same time, appealing to or representing the LGBT audience. Namely, gaystreaming is a shifting of content “designed to draw in a larger general audience, particularly heterosexual women (Ng, 2013, p. 259).”

I believe gaystreaming is part of a larger phenomenon. It is more than a channel, a network, or a niche-targeting media practice. It is valuable media strategy which addresses the politics of LGBT visibility in mainstream culture. Meanwhile, it also makes it profitable and thereby attract advertisers. Ng openly pointed it out that gaystreaming has such a dual incentive, stating Logo is “engaged in LGBT programming not primarily to advance the cause of ‘gay rights’, but because it can prove profitable (2013, p. 276).”

Logo’s gaystreaming programs are obviously materialistic, many of which are “reality series that deal with style (Ng, 2013, 267).” It has been quite convenient for gaystreaming to be one of scarcely a few methods that manages to both address a marginalized group, thereby appearing to be helping society and equality movements, and continuously making profits for themselves, which proves a successful business model. It helps normalize people in the LGBTQ community, which may help increase social acceptance to gay people, to some extent. While most businesses are trying to figure out how to show their Corporate Social Responsibility, raising even more ethical questions, gaystreaming innocently started speaking for minorities, the LGBTQ group, and happens to make money. Logo made it “praiseworthy” that RuPaul’s Drag Race provided it with “a convenient go-to program for its diversity quotient (2013, p. 267).” It is a win-win maneuver.

One good instance is the show “Queer Eye for the Straight Guy,” where five gay men help a heterosexual man with advice in fashion, interior design, personal grooming, style, and culture, which involves many shopping of luxuries. It is not a show for the LGBTQ community, it is a show for everyone who also pursues consumerism and tries to be a pioneer of “open-minded and educated modern human beings.” Hence, especially, those affluent heterosexual women, who are “well-off consumers both eager to keep apprised of the newest lifestyle trends and influential among their peers” and promoting the opulent consumerist cultures, are also attracted to these gaystreaming shows (2013, p. 261). Holding these audience market, gaystreaming has become a tool for television networks to increase profits.

The show “Project Runway” is another example of gaystreaming. It is a reality television show which provides a friendly competition platform for new designers or amateur designers to showcase their fashion (clothing) designs based on certain assigned themes. Appearing to be a design show or fashion show, it also features city views and several gay fashion designers and judges. Like all the other gaystreaming shows, Project Runway’s target audience is clearly far more than the LGBTQ audiences, fashionista, fashion-enthusiastic female, design students, and anyone who is interested such kind of competition reality television shows can be it target audience, especially those wealthy and consumerist female heterosexual audience who wants to purchase similar high-fashion outfits or outfits that are designed by the designers on the show. While the show showcases those brilliant gay designers, it to some extent help normalize and even praise homosexuals in society – which is not true as it somehow reinforces the stereotypes towards gay people and both male and female genders, highlighting that gay men do “girly” thereby “gay” things, they act “girly” thereby “gayly”. Moreover, according to Ng’s theory, while normalizing and trying to increase the acceptance of these specific formal-marginalized individuals who are talented, good-looking, and relatively wealthy, it reinforces the marginalization of the rest of the LGBTQ community who cannot participate in this mass consumerism culture. Even though gaystreaming appears to be helping the LGBTQ community and doing good to society while making profits, which seems like a nearly perfect move, it could also ultimately backfire the community and be counterproductive for the equality movements.

A second incidence of gaystreaming is the NBC sitcom “30 Rock.” The show has an opulent gay vibe, having a large number of LGBTQ characters in it and giving gay plots to characters who were assumed to be heterosexual, while using the traditional sitcom format that can attract a broad audience. Even though the show is clearly targeting the LGBTQ niche audience, as a sitcom, thanks to the genre, its huge audience base managed to secure its advertising revenues.

Another example, which even though is not a television show, the “A Gay and A NonGay” podcast, serves as a comedy that targets both gay and non-gay audiences. It is a comedy podcast which talks about love lives and daily activities of the hosts and comments on things they encountered. It also hosts live shows, which have been attracting many fans from the LGBTQ community. However, as a comedy, everyone who is not homophobia can enjoy it. What’s good about it is that it is not very consumerism – at least not blatantly consumeristic. As a relatively more positive example, A Gay and A NonGay does support the community without being consumeristic to make money, advertising a gay-dating application which was also to support the LGBTQ community.

Similar but not exactly gaystreaming, still showcasing a relative niche audience group while targeting a broader market is another comedy podcast, “Guilty Feminists.” While focusing on the niche feminist women, with the hosts and most guest hosts are female, and most live show audience are female, it is a hilarious “talk show” for everyone – probably as long as they are not misogynists.

In short, gaystreaming is not only a viable practice niching on gay community, but a media method to broadcast a niche theme under a commonly accepted big topic or genre, which might support the niche and benefit the business itself. It allows people from the LGBT community to become more of parts of the mainstream society. However, as a twisted heterosexual audience’s comment that I heard of, “fat or ugly people have no right to be gay,” gaystreaming also separates the normalized segment of community – the educated, decent, skilled, and middle-class gay people – from the rest, making some already marginalized people more marginalized.

Stereotyping Genders in the LGBT Community over Television

The Impact of Television on Modern Day Society