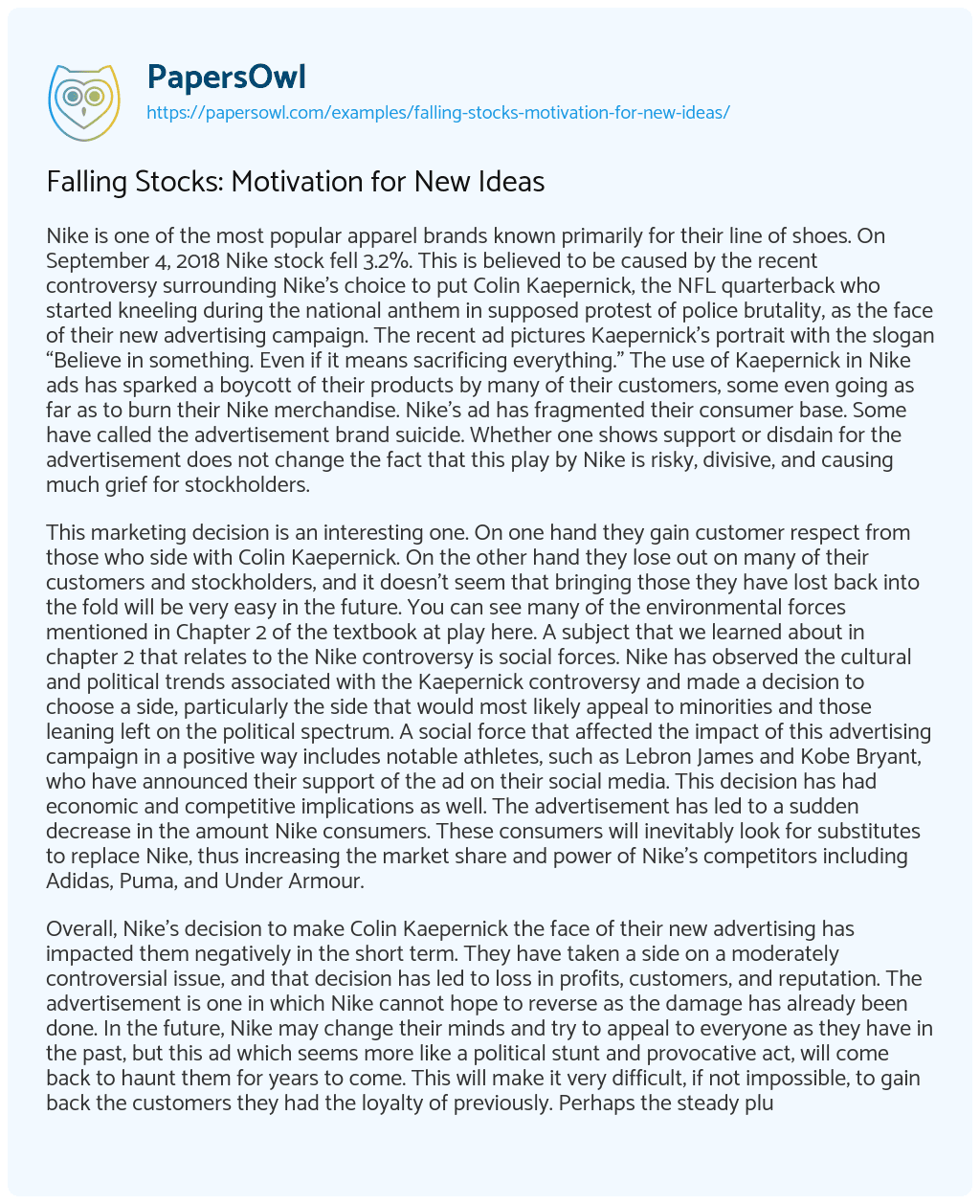 Nike is one of the most popular apparel brands known primarily for their line of shoes. On September 4, 2018 Nike stock fell 3.2%. This is believed to be caused by the recent controversy surrounding Nike’s choice to put Colin Kaepernick, the NFL quarterback who started kneeling during the national anthem in supposed protest of police brutality, as the face of their new advertising campaign. The recent ad pictures Kaepernick’s portrait with the slogan “Believe in something. Even if it means sacrificing everything.” The use of Kaepernick in Nike ads has sparked a boycott of their products by many of their customers, some even going as far as to burn their Nike merchandise. Nike’s ad has fragmented their consumer base. Some have called the advertisement brand suicide. Whether one shows support or disdain for the advertisement does not change the fact that this play by Nike is risky, divisive, and causing much grief for stockholders.

This marketing decision is an interesting one. On one hand they gain customer respect from those who side with Colin Kaepernick. On the other hand they lose out on many of their customers and stockholders, and it doesn’t seem that bringing those they have lost back into the fold will be very easy in the future. You can see many of the environmental forces mentioned in Chapter 2 of the textbook at play here. A subject that we learned about in chapter 2 that relates to the Nike controversy is social forces. Nike has observed the cultural and political trends associated with the Kaepernick controversy and made a decision to choose a side, particularly the side that would most likely appeal to minorities and those leaning left on the political spectrum. A social force that affected the impact of this advertising campaign in a positive way includes notable athletes, such as Lebron James and Kobe Bryant, who have announced their support of the ad on their social media. This decision has had economic and competitive implications as well. The advertisement has led to a sudden decrease in the amount Nike consumers. These consumers will inevitably look for substitutes to replace Nike, thus increasing the market share and power of Nike’s competitors including Adidas, Puma, and Under Armour.

Overall, Nike’s decision to make Colin Kaepernick the face of their new advertising has impacted them negatively in the short term. They have taken a side on a moderately controversial issue, and that decision has led to loss in profits, customers, and reputation. The advertisement is one in which Nike cannot hope to reverse as the damage has already been done. In the future, Nike may change their minds and try to appeal to everyone as they have in the past, but this ad which seems more like a political stunt and provocative act, will come back to haunt them for years to come. This will make it very difficult, if not impossible, to gain back the customers they had the loyalty of previously. Perhaps the steady plummet of their stock value that’s to come will have their marketing team scrambling for new ideas.

Company Motto: Just do it

Motivation of Getting off of their Drug or Alcohol Abuse