Criticism is Important in any Business 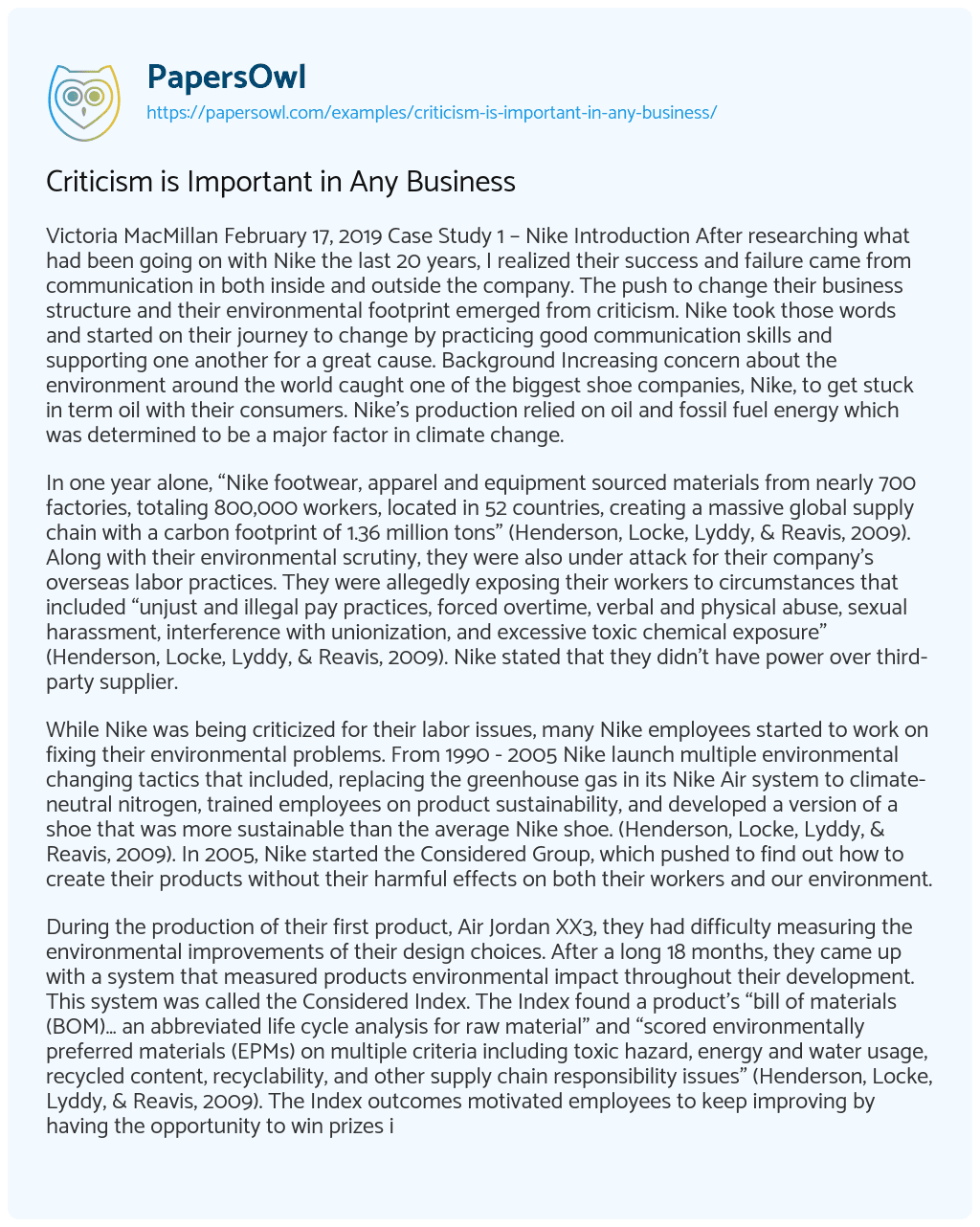 Victoria MacMillan February 17, 2019 Case Study 1 – Nike Introduction After researching what had been going on with Nike the last 20 years, I realized their success and failure came from communication in both inside and outside the company. The push to change their business structure and their environmental footprint emerged from criticism. Nike took those words and started on their journey to change by practicing good communication skills and supporting one another for a great cause. Background Increasing concern about the environment around the world caught one of the biggest shoe companies, Nike, to get stuck in term oil with their consumers. Nike’s production relied on oil and fossil fuel energy which was determined to be a major factor in climate change.

In one year alone, “Nike footwear, apparel and equipment sourced materials from nearly 700 factories, totaling 800,000 workers, located in 52 countries, creating a massive global supply chain with a carbon footprint of 1.36 million tons” (Henderson, Locke, Lyddy, & Reavis, 2009). Along with their environmental scrutiny, they were also under attack for their company’s overseas labor practices. They were allegedly exposing their workers to circumstances that included “unjust and illegal pay practices, forced overtime, verbal and physical abuse, sexual harassment, interference with unionization, and excessive toxic chemical exposure” (Henderson, Locke, Lyddy, & Reavis, 2009). Nike stated that they didn’t have power over third-party supplier.

While Nike was being criticized for their labor issues, many Nike employees started to work on fixing their environmental problems. From 1990 – 2005 Nike launch multiple environmental changing tactics that included, replacing the greenhouse gas in its Nike Air system to climate-neutral nitrogen, trained employees on product sustainability, and developed a version of a shoe that was more sustainable than the average Nike shoe. (Henderson, Locke, Lyddy, & Reavis, 2009). In 2005, Nike started the Considered Group, which pushed to find out how to create their products without their harmful effects on both their workers and our environment.

During the production of their first product, Air Jordan XX3, they had difficulty measuring the environmental improvements of their design choices. After a long 18 months, they came up with a system that measured products environmental impact throughout their development. This system was called the Considered Index. The Index found a product’s “bill of materials (BOM)… an abbreviated life cycle analysis for raw material” and “scored environmentally preferred materials (EPMs) on multiple criteria including toxic hazard, energy and water usage, recycled content, recyclability, and other supply chain responsibility issues” (Henderson, Locke, Lyddy, & Reavis, 2009). The Index outcomes motivated employees to keep improving by having the opportunity to win prizes if they could figure out ways to decrease their footprint associated with their product. (Henderson, Locke, Lyddy, & Reavis, 2009).

Once the Index was understood, the Considered Group created another group called the “super-users” who were individual experts and provided feedback to the group. The CEO, Mark Parker help push his employees by spreading news that they were going make have every shoe in the end of spring 2011 environmentally rated a minimum of a “Bronze”. On the other side of management, there was thoughts that the Considered Group were not the high of value. They were looked at as the leaders that pushed ideas on their teammates but since there was a valuable meaning behind the push it was looked at in a different way by most employees. (Henderson, Locke, Lyddy, & Reavis, 2009). Throughout the journey to sustainability, the Nike employees worked along one another in separate teams while combining their skills. In the end, they had shoes that they rated “Silver” and “Gold”. This was a great achievement for the team, but with every victory, there is struggle behind it.

Some of the difficult factors during the designing process was, figuring out which material to use, time limits, profit margins, spectacle supply chain partners, and customer’s opinions. But no matter how tough it was, the employees held pride in “doing the right thing”, and Parker saw the future of Nike in that saying. (Henderson, Locke, Lyddy, & Reavis, 2009). It wasn’t long before other companies started to follow along with the environmental change. Many big name brands went public and posting on their tags a scale of their products environmental impact. (Henderson, Locke, Lyddy, & Reavis, 2009). They also were creating more biodegradable shoes that we made of recycle materials. In order for Nike to keep up with the competition, they had to make sure everything was working effectively and efficiently. They realized that they needed to communicate and create bonds with the material producers in order to be able to produce new environmental products. (Henderson, Locke, Lyddy, & Reavis, 2009).

Alternatives Nike has done many things in the last 20 years that have had both success and failure when it comes to communication.

Alternative 1: When Nike heard about the criticism they were facing over the environment and their labor practices, they chose to deny all allegations for a while. “The company took a very defensive approach to it [criticism] for about four to five years. Really all that did was to fuel the campaign” explained the CR leader, Hannah Jones (Abnett, 2016). Nike was struggling to please their critics and needed to act upon it. Nike decision to not give in to the critics and slowly but surly turn themselves into a sustainability leader ended up working in the end. They communicated very little about what was happening and then years later, they showed everyone how much they transformed their products for the environment and their employee’s health.

Alternative 2: Inside their business, there was a lot of reconfiguring going on in both the product design and the employees. For their product, Nike took initiative to re-designing everything from the appearance to the material. “The material is made from recycled sneakers, plastic bottles, and manufacturing scraps from Nike’s factories” (Kaufman, 2016). The strived for the goal to create the sneaker that had the least amount of environmental impact. To obtain this goal, their structure of their product design had to change. The company ended up creating multiple different teams by sectioning everyone by expertise. They created a high-level thinking team that focused on environmental impact, as well as giving the product designers more freedom to try new things. (Henderson, Locke, Lyddy, & Reavis, 2009). Their CEO, Mark Parker keeps everyone motivated by always asking question to make them come up with their own answers. “Leaders who ask questions and encourage their team to find the answers tend to be more effective than those who try to know and do it all themselves” (Lebowitz, 2015). At Nike, their team has created shoes that no one thought could be made and if their CEO told them to do everything a certain way, the shoes might have never been invented.

Proposed Solution: The solution is to have good communication between all sectors of the business. The business must communicate well with its employees to create reliable products and the critics sometimes must be spoken too in a certain manner. I believe not every company would be around today if they ignored criticism of environmental issues and labor practices like Nike did. Overall, they did manage to overcome their bad image and succeed in today’s market. They are now posting a sustainable report yearly and they have inspired many other companies to look into the power of sustainability (although the other companies may be competitors).

The communication between the Considered Group and the project designers had to be in a positive tone and both sides had to be open to hearing new ideas. These groups both had to investigate suppliers to find the best material for their product. They also had to have a good relationship with their senior managers to get everything approved and completed. Parker showed his employees a very different way of communication between CEO and employee. By giving them the opportunity to express their own idea and answer questions on their own, great things happened.

Recommendation: Even in todays “greener” society, it’s still highly possible that a company can create as much harm as Nike did, but with the help of good communications skills, they might be able to change their ways.

Criticism is Important in Any Business. (2021, Oct 20). Retrieved from https://papersowl.com/examples/criticism-is-important-in-any-business/

A Success in New Business

Birth of the Largest Company