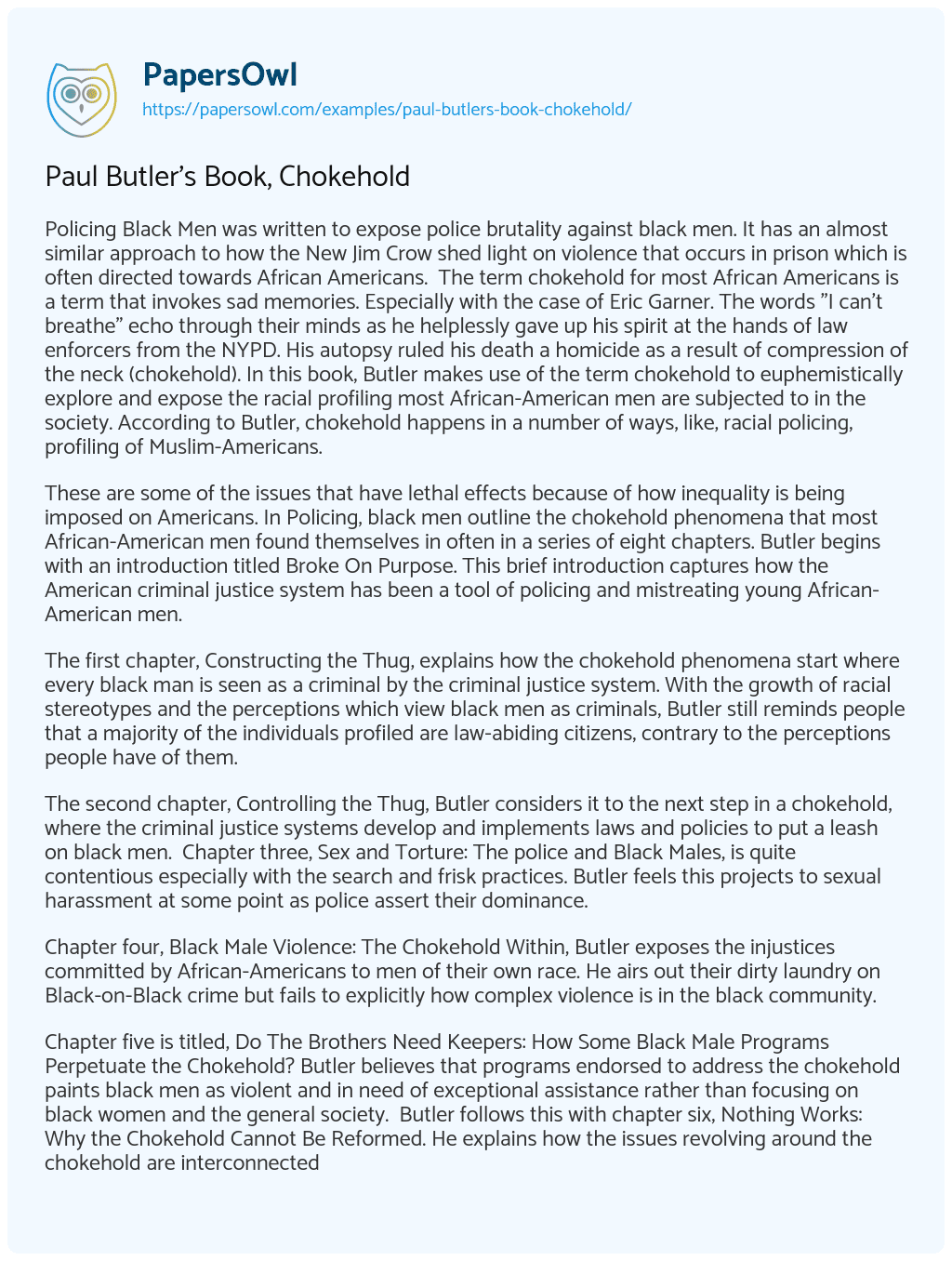 Policing Black Men was written to expose police brutality against black men. It has an almost similar approach to how the New Jim Crow shed light on violence that occurs in prison which is often directed towards African Americans.  The term chokehold for most African Americans is a term that invokes sad memories. Especially with the case of Eric Garner. The words “I can’t breathe” echo through their minds as he helplessly gave up his spirit at the hands of law enforcers from the NYPD. His autopsy ruled his death a homicide as a result of compression of the neck (chokehold). In this book, Butler makes use of the term chokehold to euphemistically explore and expose the racial profiling most African-American men are subjected to in the society. According to Butler, chokehold happens in a number of ways, like, racial policing, profiling of Muslim-Americans.

These are some of the issues that have lethal effects because of how inequality is being imposed on Americans. In Policing, black men outline the chokehold phenomena that most African-American men found themselves in often in a series of eight chapters. Butler begins with an introduction titled Broke On Purpose. This brief introduction captures how the American criminal justice system has been a tool of policing and mistreating young African-American men.

The first chapter, Constructing the Thug, explains how the chokehold phenomena start where every black man is seen as a criminal by the criminal justice system. With the growth of racial stereotypes and the perceptions which view black men as criminals, Butler still reminds people that a majority of the individuals profiled are law-abiding citizens, contrary to the perceptions people have of them.

The second chapter, Controlling the Thug, Butler considers it to the next step in a chokehold, where the criminal justice systems develop and implements laws and policies to put a leash on black men.  Chapter three, Sex and Torture: The police and Black Males, is quite contentious especially with the search and frisk practices. Butler feels this projects to sexual harassment at some point as police assert their dominance.

Chapter four, Black Male Violence: The Chokehold Within, Butler exposes the injustices committed by African-Americans to men of their own race. He airs out their dirty laundry on Black-on-Black crime but fails to explicitly how complex violence is in the black community.

Chapter five is titled, Do The Brothers Need Keepers: How Some Black Male Programs Perpetuate the Chokehold? Butler believes that programs endorsed to address the chokehold paints black men as violent and in need of exceptional assistance rather than focusing on black women and the general society.  Butler follows this with chapter six, Nothing Works: Why the Chokehold Cannot Be Reformed. He explains how the issues revolving around the chokehold are interconnected hence presenting a complex situation in addressing the vice.

The last two chapters, If You Catch a Case, Act Like You Know and Unlocking the Chokehold are geared towards a post chokehold society where peaceful coexistence is possible. Butler offers advice borrowed from his prosecutorial expertise to espouse a society in shunning and breaking the chokehold.