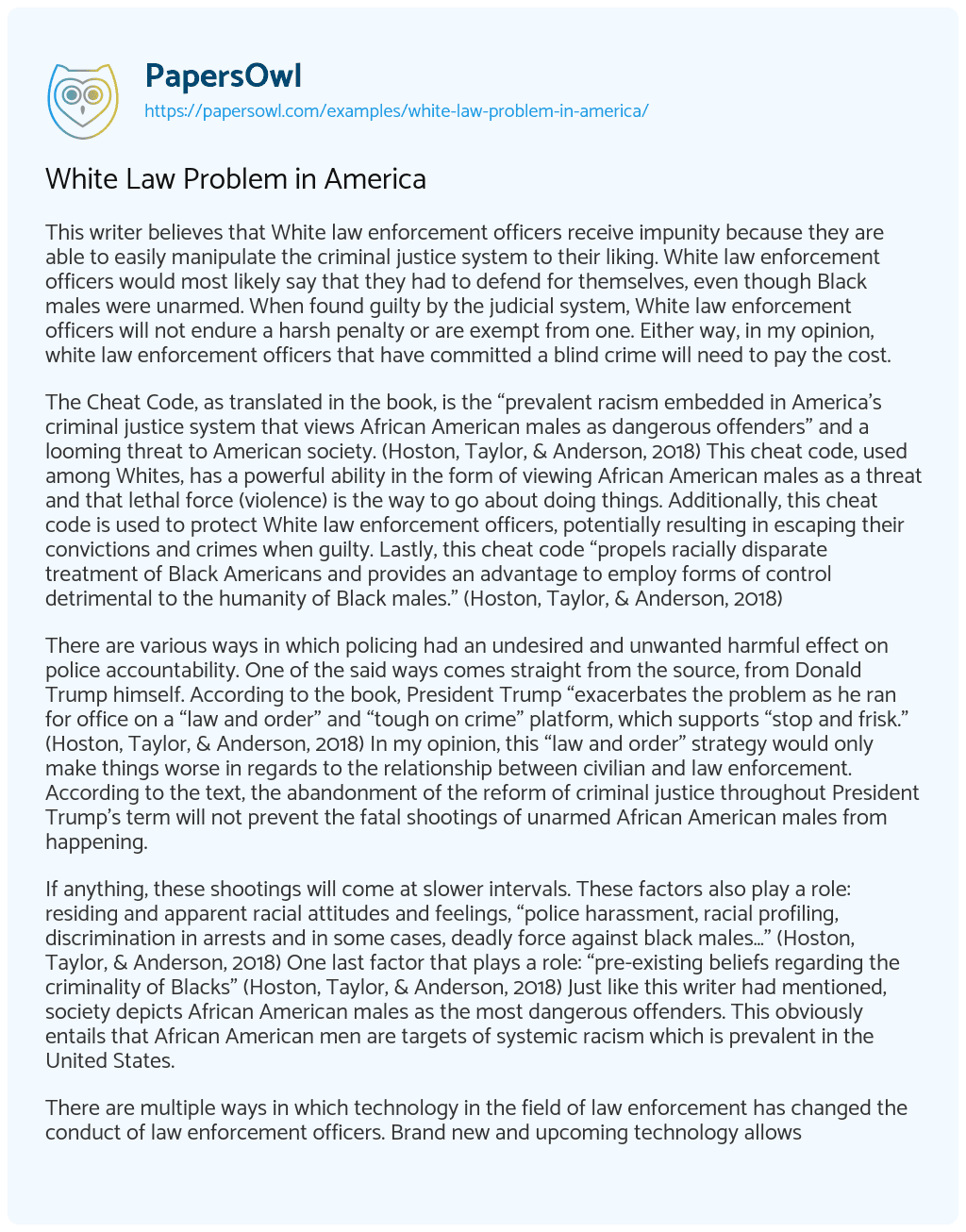 The Cheat Code, as translated in the book, is the “prevalent racism embedded in America’s criminal justice system that views African American males as dangerous offenders” and a looming threat to American society. (Hoston, Taylor, & Anderson, 2018) This cheat code, used among Whites, has a powerful ability in the form of viewing African American males as a threat and that lethal force (violence) is the way to go about doing things. Additionally, this cheat code is used to protect White law enforcement officers, potentially resulting in escaping their convictions and crimes when guilty. Lastly, this cheat code “propels racially disparate treatment of Black Americans and provides an advantage to employ forms of control detrimental to the humanity of Black males.” (Hoston, Taylor, & Anderson, 2018)

There are various ways in which policing had an undesired and unwanted harmful effect on police accountability. One of the said ways comes straight from the source, from Donald Trump himself. According to the book, President Trump “exacerbates the problem as he ran for office on a “law and order” and “tough on crime” platform, which supports “stop and frisk.” (Hoston, Taylor, & Anderson, 2018) In my opinion, this “law and order” strategy would only make things worse in regards to the relationship between civilian and law enforcement. According to the text, the abandonment of the reform of criminal justice throughout President Trump’s term will not prevent the fatal shootings of unarmed African American males from happening.

If anything, these shootings will come at slower intervals. These factors also play a role: residing and apparent racial attitudes and feelings, “police harassment, racial profiling, discrimination in arrests and in some cases, deadly force against black males…” (Hoston, Taylor, & Anderson, 2018) One last factor that plays a role: “pre-existing beliefs regarding the criminality of Blacks” (Hoston, Taylor, & Anderson, 2018) Just like this writer had mentioned, society depicts African American males as the most dangerous offenders. This obviously entails that African American men are targets of systemic racism which is prevalent in the United States.

There are multiple ways in which technology in the field of law enforcement has changed the conduct of law enforcement officers. Brand new and upcoming technology allows for less discreet manners, and will allow law enforcement to be more transparent and accountable to the American public. BWCs (Body-Worn Cameras), for example, will play a crucial part in determining who is in the wrong in regards to an event. According to the text, this new technology is capable of restoring the relationship between police and the community during a strenuous time between racial and ethnic minorities and officers in the United States. Due to this emergence of technology, the Commission reported that the Police Department of Los Angeles will undergo sweeping indictments on how they perform their procedures, their management, and their administration. Last but not least, the Task Force made recommendations in part due to the rise of technology, namely by establishing new standards for discovering and implementing new technology. This technology would possibly be reproduced on a massive scale, for protection.

Overall, this writer does think the public is better served by the increase in technology. In Reflecting on Race, Policing, Social Distance, and Technology in a New Era, it has been mentioned that technology (body worn cameras for example) can transmit pictures and videos through different wages of social media. Social media is a place in which information and communication are exchanged for people worldwide, often resulting in online disputes or the creation of support groups and support pages. This, in turn, leads to the improvement of reliance between minority communities and law enforcement officers and highlights the problems associated with it. The public can be better served by the increase in technology as they assist law enforcement officers by pushing and handing information to citizens (as it happens and how it happens), moving beyond community policing and making citizens involved, online or in the real world.

Policing and Community Relations in America