Theme of Redemption in the Kite Runner 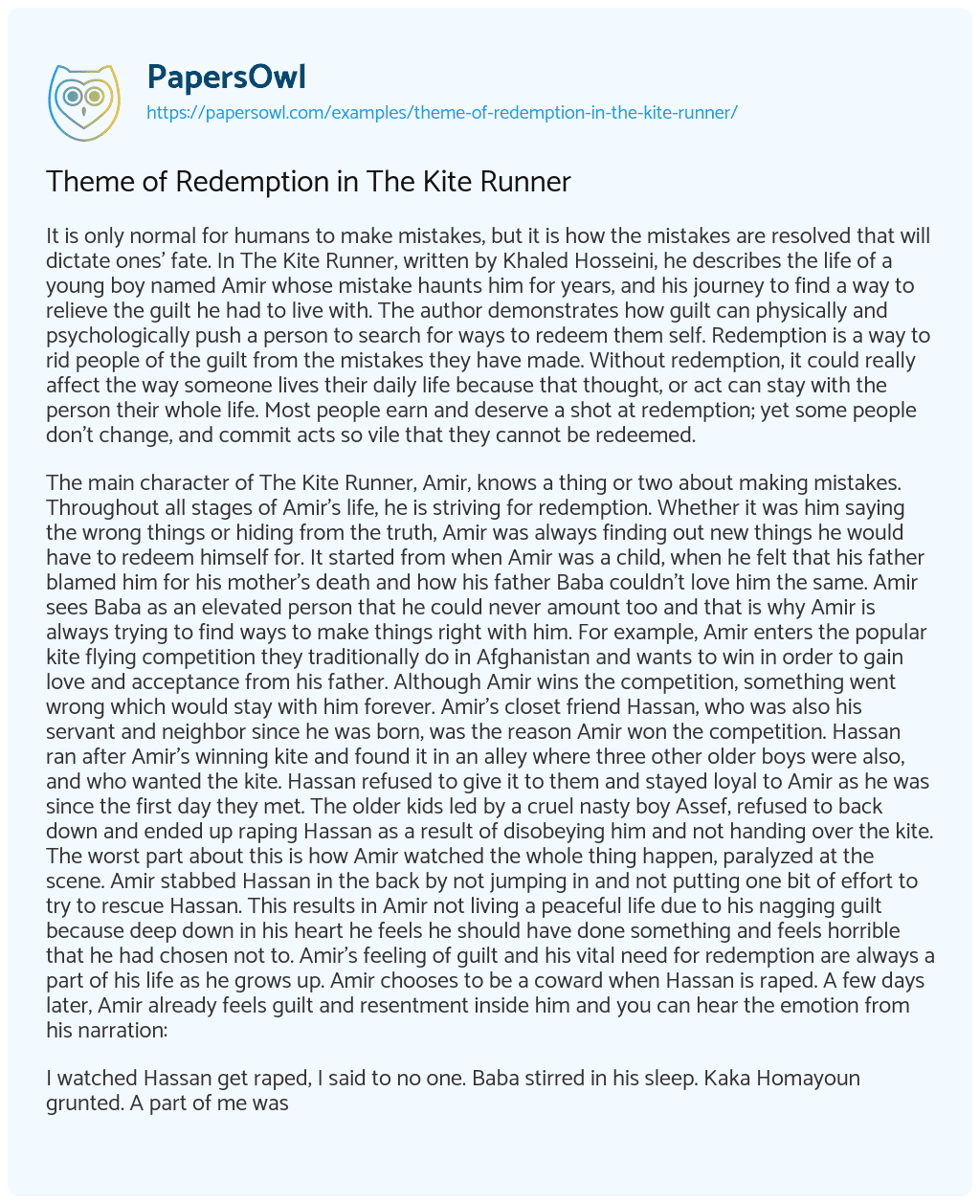 It is only normal for humans to make mistakes, but it is how the mistakes are resolved that will dictate ones’ fate. In The Kite Runner, written by Khaled Hosseini, he describes the life of a young boy named Amir whose mistake haunts him for years, and his journey to find a way to relieve the guilt he had to live with. The author demonstrates how guilt can physically and psychologically push a person to search for ways to redeem them self. Redemption is a way to rid people of the guilt from the mistakes they have made. Without redemption, it could really affect the way someone lives their daily life because that thought, or act can stay with the person their whole life. Most people earn and deserve a shot at redemption; yet some people don’t change, and commit acts so vile that they cannot be redeemed.

The main character of The Kite Runner, Amir, knows a thing or two about making mistakes. Throughout all stages of Amir’s life, he is striving for redemption. Whether it was him saying the wrong things or hiding from the truth, Amir was always finding out new things he would have to redeem himself for. It started from when Amir was a child, when he felt that his father blamed him for his mother’s death and how his father Baba couldn’t love him the same. Amir sees Baba as an elevated person that he could never amount too and that is why Amir is always trying to find ways to make things right with him. For example, Amir enters the popular kite flying competition they traditionally do in Afghanistan and wants to win in order to gain love and acceptance from his father. Although Amir wins the competition, something went wrong which would stay with him forever. Amir’s closet friend Hassan, who was also his servant and neighbor since he was born, was the reason Amir won the competition. Hassan ran after Amir’s winning kite and found it in an alley where three other older boys were also, and who wanted the kite. Hassan refused to give it to them and stayed loyal to Amir as he was since the first day they met. The older kids led by a cruel nasty boy Assef, refused to back down and ended up raping Hassan as a result of disobeying him and not handing over the kite. The worst part about this is how Amir watched the whole thing happen, paralyzed at the scene. Amir stabbed Hassan in the back by not jumping in and not putting one bit of effort to try to rescue Hassan. This results in Amir not living a peaceful life due to his nagging guilt because deep down in his heart he feels he should have done something and feels horrible that he had chosen not to. Amir’s feeling of guilt and his vital need for redemption are always a part of his life as he grows up. Amir chooses to be a coward when Hassan is raped. A few days later, Amir already feels guilt and resentment inside him and you can hear the emotion from his narration:

I watched Hassan get raped, I said to no one. Baba stirred in his sleep. Kaka Homayoun grunted. A part of me was hoping someone would wake up and hear, so I wouldn’t have to live with this lie anymore. But no one woke up and in the silence that followed, I understood the nature of my new curse: I was going to get away with it. (Hosseini 86)

As Amir is lying in the dark, nothing but his own thoughts and guilt are taking over his life. He understands how he is going to get away with betrayal and how the only way to live with his remorse is to ignore Hassan, so he doesn’t have to think about his sin. In a result, Amir ends up setting up Hassan, and states, “I took a couple of the envelopes of cash from the pile of gifts and my watch and tiptoed out…I lifted Hassan’s mattress and planted my new watch and a handful of Afghan bills under it.” (Hosseini 104). Amir needed to get Hassan out of sight and the only way was to make it look like Hassan has committed a sin that Amir’s dad hated the most, stealing. This led to Hassan and his father getting kicked out of the house; however, Amir still can’t get over his guilt and the fact how Hassan has moved out of the house doesn’t change anything. His sin will still haunt Amir in his adult years and makes him feel worst when he feels responsible for Hassan’s tragic death.

After reading the novel and studying Amir’s guilt, due to the betrayal of Hassan, the reader sees how guilt can worsen over time and can have a major impact in the decisions one makes. Guilt is an emotion that has the power to destroy one’s life without redemption. Redemption is for the people who deserve it and understand to learn from their mistakes and become a better person from it. Redemption is not for everyone, some mistakes are more costly than others and some people just don’t have the heart to change no matter how much advice or help they get. However, that is not always the case, in fact it is always inspiring to see someone pick themselves up and keep trying even though they keep making the same mistake and go through many disappointments. “Mistakes are synonymous with being human. We all have a dark side, a destructive side. How much we allow it to take over depends on our level of awareness and what stage of growth we’re at.” (Manal Ghosain). Most people in this world have it in their hearts to change and to grow from failure, some people just can’t make up for their vile acts and those are the people who are ones facing life in prison and the people who just mentally can’t move on from their past. In an interview with famous American executive, Oprah Winfrey, she stated, “We’re all on the same journey. People are taking different paths to get there. And I think no matter how many times you fail, you fall down in your life, you certainly have the opportunity until you take your last breath to be redeemed.” (Manal Ghosain). In other words, as long as someone is alive with the right heart and mindset, every minute can be the beginning of a new chance. It takes guts to own one’s mistake and go for a second chance. It is an act of courage to admit to our shortcomings and takes strength and trust to believe in ourselves and the possibility of changing. “We can’t escape the effects of our past causes, of course, but we can aim to be transformed by them in a way that strengthens the good in us.” (Alex Lickerman). People who live in the past and don’t learn from their past mistakes are the people who just don’t have what it takes to be redeemed. Unlike Amir, it is not until several years later that Amir finally finds a way to redeem himself of his sins when he says, “There is a way to be good again, he’d said. A way to end the cycle. With a little boy. An orphan. Hassan’s son. Somewhere in Kabul.” (Hosseini 226-227). Amir is now aware that he must save Hassan’s son, Sohrab, to atone for his sins. He understands how he needs to risk his life to save Sohrab and since Amir is older and more mature in this point of the novel, he finally makes the right decision to go that would eventually change his character and future life.

Exploring Amir’s need for atonement shows the reader how important finding redemption is and how being forgiven can allow one to finally have freedom from one’s sins and feel good about themselves. Guilt is dangerous and can take over someone’s life if they don’t redeem themselves. Redemption can only be earned and deserved and key to living a healthy lifestyle. The Kite Runner teaches how personal sacrifice, no matter at what cost, has a lasting reward. Amir helps the reader learn how that feeling of redemption allows one to move on from the past and to instead look towards a brighter future.

Theme of Redemption in The Kite Runner. (2021, Apr 26). Retrieved from https://papersowl.com/examples/theme-of-redemption-in-the-kite-runner/

The Kite Runner a Novel Full of Betrayals

Theme of Betrayal in the Kite Runner by Khaled Hosseini