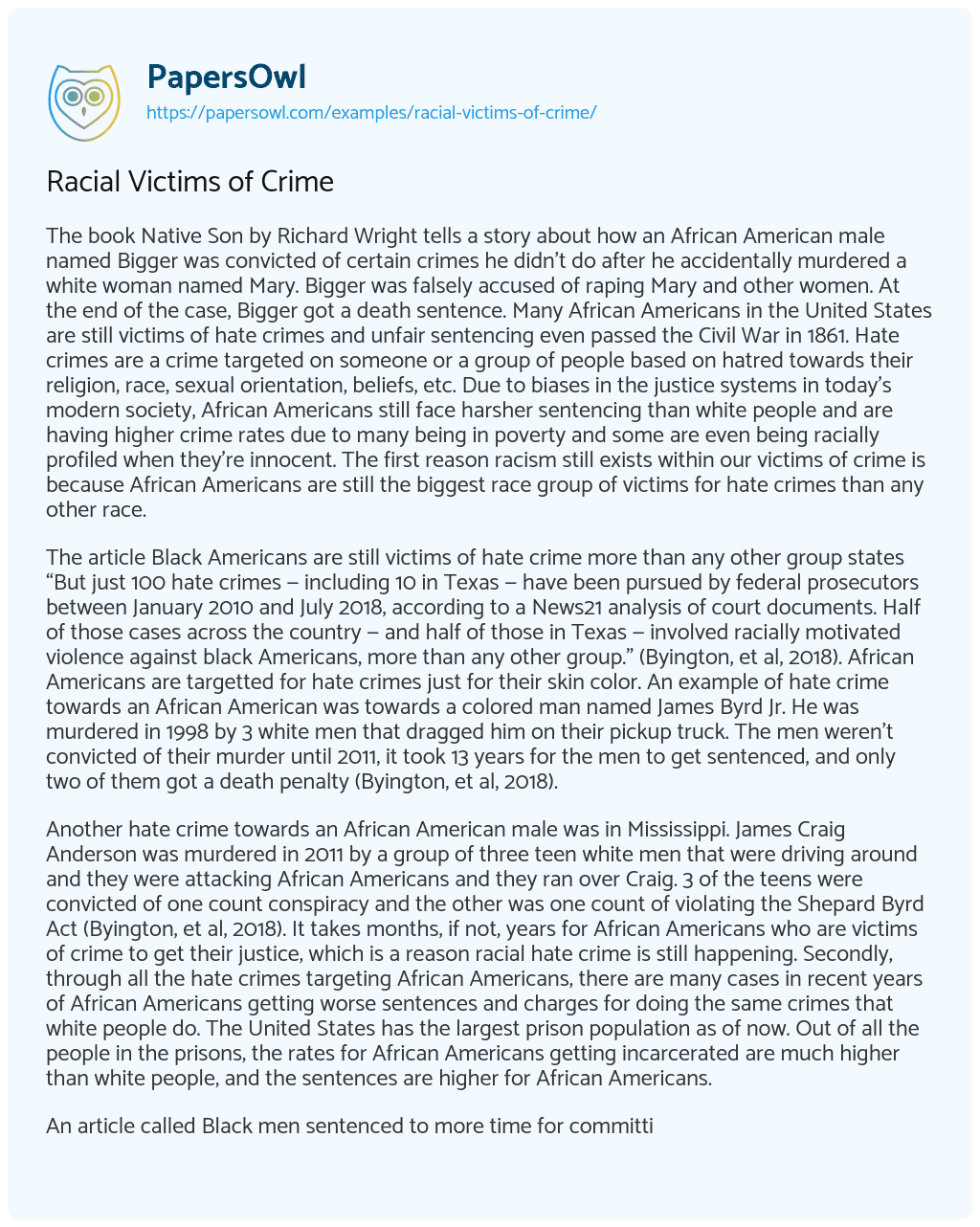 The book Native Son by Richard Wright tells a story about how an African American male named Bigger was convicted of certain crimes he didn’t do after he accidentally murdered a white woman named Mary. Bigger was falsely accused of raping Mary and other women. At the end of the case, Bigger got a death sentence. Many African Americans in the United States are still victims of hate crimes and unfair sentencing even passed the Civil War in 1861. Hate crimes are a crime targeted on someone or a group of people based on hatred towards their religion, race, sexual orientation, beliefs, etc. Due to biases in the justice systems in today’s modern society, African Americans still face harsher sentencing than white people and are having higher crime rates due to many being in poverty and some are even being racially profiled when they’re innocent. The first reason racism still exists within our victims of crime is because African Americans are still the biggest race group of victims for hate crimes than any other race.

The article Black Americans are still victims of hate crime more than any other group states “But just 100 hate crimes — including 10 in Texas — have been pursued by federal prosecutors between January 2010 and July 2018, according to a News21 analysis of court documents. Half of those cases across the country — and half of those in Texas — involved racially motivated violence against black Americans, more than any other group.” (Byington, et al, 2018). African Americans are targetted for hate crimes just for their skin color. An example of hate crime towards an African American was towards a colored man named James Byrd Jr. He was murdered in 1998 by 3 white men that dragged him on their pickup truck. The men weren’t convicted of their murder until 2011, it took 13 years for the men to get sentenced, and only two of them got a death penalty (Byington, et al, 2018).

An article called Black men sentenced to more time for committing the same exact crime as a white person, study finds states the following: “Black men who commit the same crimes as white men receive federal prison sentences that are, on average, nearly 20 percent longer, according to a new report on sentencing disparities from the United States Sentencing Commission (USSC).” (Ingraham, 2017). The USSC proves that African American men do get longer sentences than white men who do the same crime. Many African Americans are much more likely to face a charge with a mandatory minimum sentence than a white person that did the same crime. If the disparity in the criminal sentencing would go down due to race, the number of African American men in prisons would go down by 9% (Ingraham, 2017). The fact that African Americans get charged more or get sentenced more time for the same crime that a white person commits is a hate crime towards African Americans. Many people of color would be out of jail or never in it if they weren’t racially profiled or victims of hate crime. In addition to African Americans being victims of hate crime, they are large victims of police brutality. Police brutality is when a police officer abuses their authority and may arrest people based on the color of their skin, religion, sexuality, etc. Many police officers have killed people just because they were African American.

In 2014 a white police officer, Darren Wilson shot and killed an unarmed African American named Michael Brown in Missouri. Darren Wilson didn’t get charged at all for murdering an unarmed person of color for no reason other than him being African American (Ochs, et al, 2018). It’s pure bias and racism if a police officer doesn’t lose their job or get charged for killing an unarmed human being for no reason other than their skin color. To this day, many African Americans and minorities are scared of being harassed by the police. An article written by J.D Prose called Poll shows Americans’ views of police brutality, anthem protests differ along racial lines surveyed Americans about how they feel about their local police, and it states the following: “ Seventy-two percent of Americans said police brutality is a “very serious” or “somewhat serious” problem with 95 percent of blacks agreeing with that, but just 66 percent of whites. When asked if police brutality is something they personally worry about, 57 percent of black Americans said it is while just 10 percent of whites did.” (Prose, 2016). African Americans are afraid of the police due to fear of being harassed and attacked by them. Many families have lost their loved ones due to policemen killing or arresting them for being a minority. Currently, police brutality is a huge racial problem in the United States as it continues to get worse and worse. However, some people may disagree that African Americans are the biggest victims of hate crime because they do a lot of crime statistically.

It is a proven fact that African Americans commit the most homicide, but there may be many factors and reasoning to them committing crimes including them disliking the police, how they’re being treated, and living in poverty. Patrick Worrall, the author of the article Do black Americans commit more crime? talks about statistics and opinions about how African Americans may commit crimes due to them being in high poverty, “This study of violent crime in deprived neighbourhoods in Cleveland, Ohio, found that reductions in poverty led to reductions in the crime rate in exactly the same way in predominantly black and white areas, suggesting poverty, not race, is the biggest factor.” (Worrall, 2014). African Americans living in poverty may be a large factor of the high homicide crime rates because they’re unhappy. Many minority groups struggle to find a job due to them being minorities. A lot of African American people struggle to get money in order to get out of poverty which can cause anger and stress, which may lead to crime. Overall, the racial hate crime happening after over 160 years is a huge problem in the United States due to biases in the justice system and racism still existing. African Americans and minorities are losing their family members due to unfair racial profiling and police brutality. Instead of just racially profiling minorities and African Americans, there should be more job opportunities for them, and less of a biased justice system. Policemen shouldn’t just go around assuming that every African American is a criminal and arrest them or shoot them, they should treat them like how they were taught to treat everyone. Given these points, African Americans are the largest group of victims of hate crime due to racism still happening in America.

Hate Crime and the Legal Process: Options for Law Reform