Against Violence of Arab and Muslim People 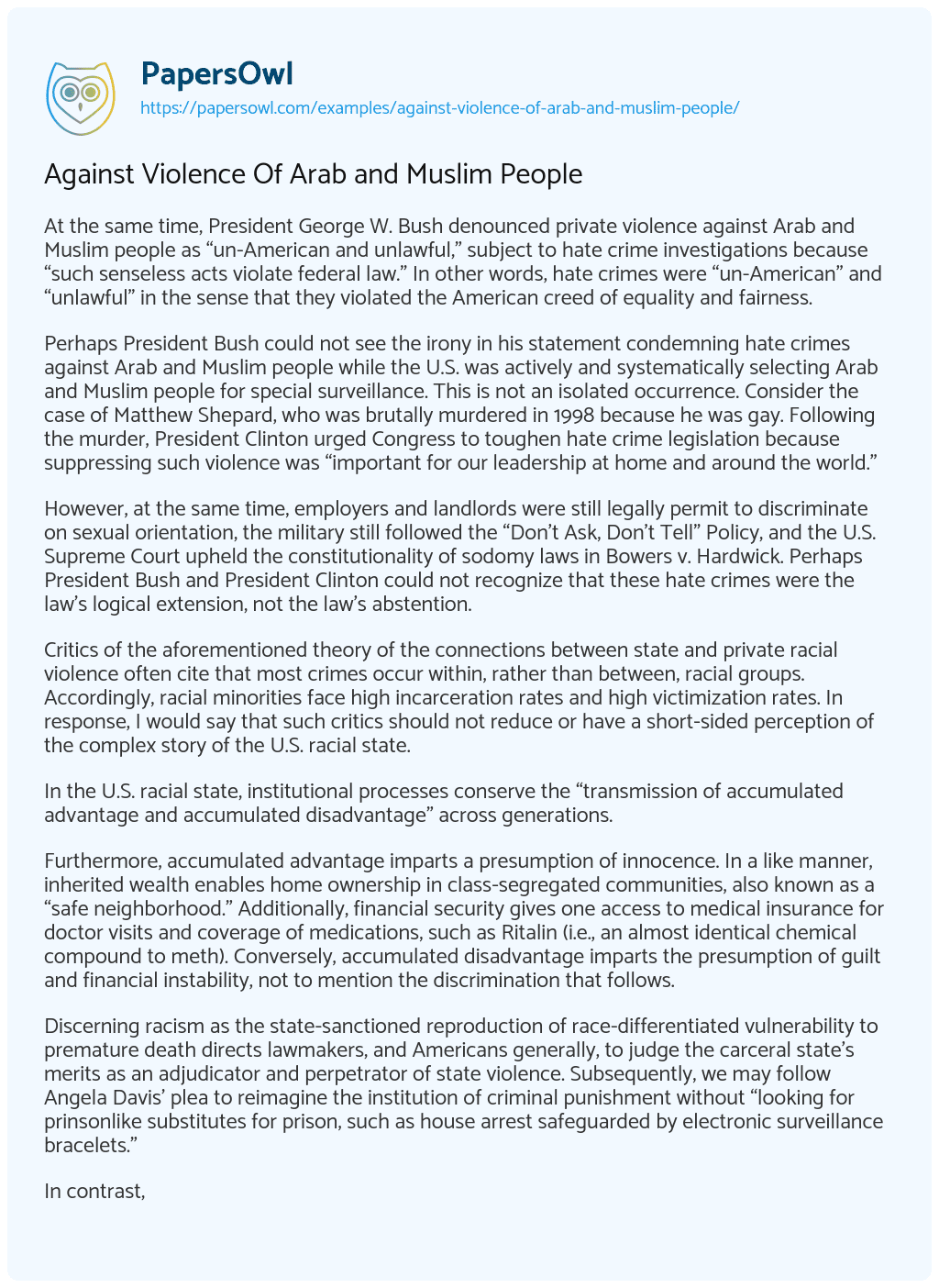 At the same time, President George W. Bush denounced private violence against Arab and Muslim people as “un-American and unlawful,” subject to hate crime investigations because “such senseless acts violate federal law.” In other words, hate crimes were “un-American” and “unlawful” in the sense that they violated the American creed of equality and fairness.

Perhaps President Bush could not see the irony in his statement condemning hate crimes against Arab and Muslim people while the U.S. was actively and systematically selecting Arab and Muslim people for special surveillance. This is not an isolated occurrence. Consider the case of Matthew Shepard, who was brutally murdered in 1998 because he was gay. Following the murder, President Clinton urged Congress to toughen hate crime legislation because suppressing such violence was “important for our leadership at home and around the world.”

However, at the same time, employers and landlords were still legally permit to discriminate on sexual orientation, the military still followed the “Don’t Ask, Don’t Tell” Policy, and the U.S. Supreme Court upheld the constitutionality of sodomy laws in Bowers v. Hardwick. Perhaps President Bush and President Clinton could not recognize that these hate crimes were the law’s logical extension, not the law’s abstention.

Critics of the aforementioned theory of the connections between state and private racial violence often cite that most crimes occur within, rather than between, racial groups. Accordingly, racial minorities face high incarceration rates and high victimization rates. In response, I would say that such critics should not reduce or have a short-sided perception of the complex story of the U.S. racial state.

In the U.S. racial state, institutional processes conserve the “transmission of accumulated advantage and accumulated disadvantage” across generations.

Furthermore, accumulated advantage imparts a presumption of innocence. In a like manner, inherited wealth enables home ownership in class-segregated communities, also known as a “safe neighborhood.” Additionally, financial security gives one access to medical insurance for doctor visits and coverage of medications, such as Ritalin (i.e., an almost identical chemical compound to meth). Conversely, accumulated disadvantage imparts the presumption of guilt and financial instability, not to mention the discrimination that follows.

Discerning racism as the state-sanctioned reproduction of race-differentiated vulnerability to premature death directs lawmakers, and Americans generally, to judge the carceral state’s merits as an adjudicator and perpetrator of state violence. Subsequently, we may follow Angela Davis’ plea to reimagine the institution of criminal punishment without “looking for prinsonlike substitutes for prison, such as house arrest safeguarded by electronic surveillance bracelets.”

In contrast, reformers and lawmakers might envision alternatives to imprisonment. Such a system should include the demilitarization of schools, improvement of the education system, a healthcare system that provides free physical and mental care for all, and a criminal justice system focused on reparation and reconciliation. Accordingly, the creation of these new institutions could begin to claim the space currently occupied in our society by prisons.

Against Violence Of Arab and Muslim People. (2020, Nov 03). Retrieved from https://papersowl.com/examples/against-violence-of-arab-and-muslim-people/

A Review of a Muslim Woman’s Dilemma