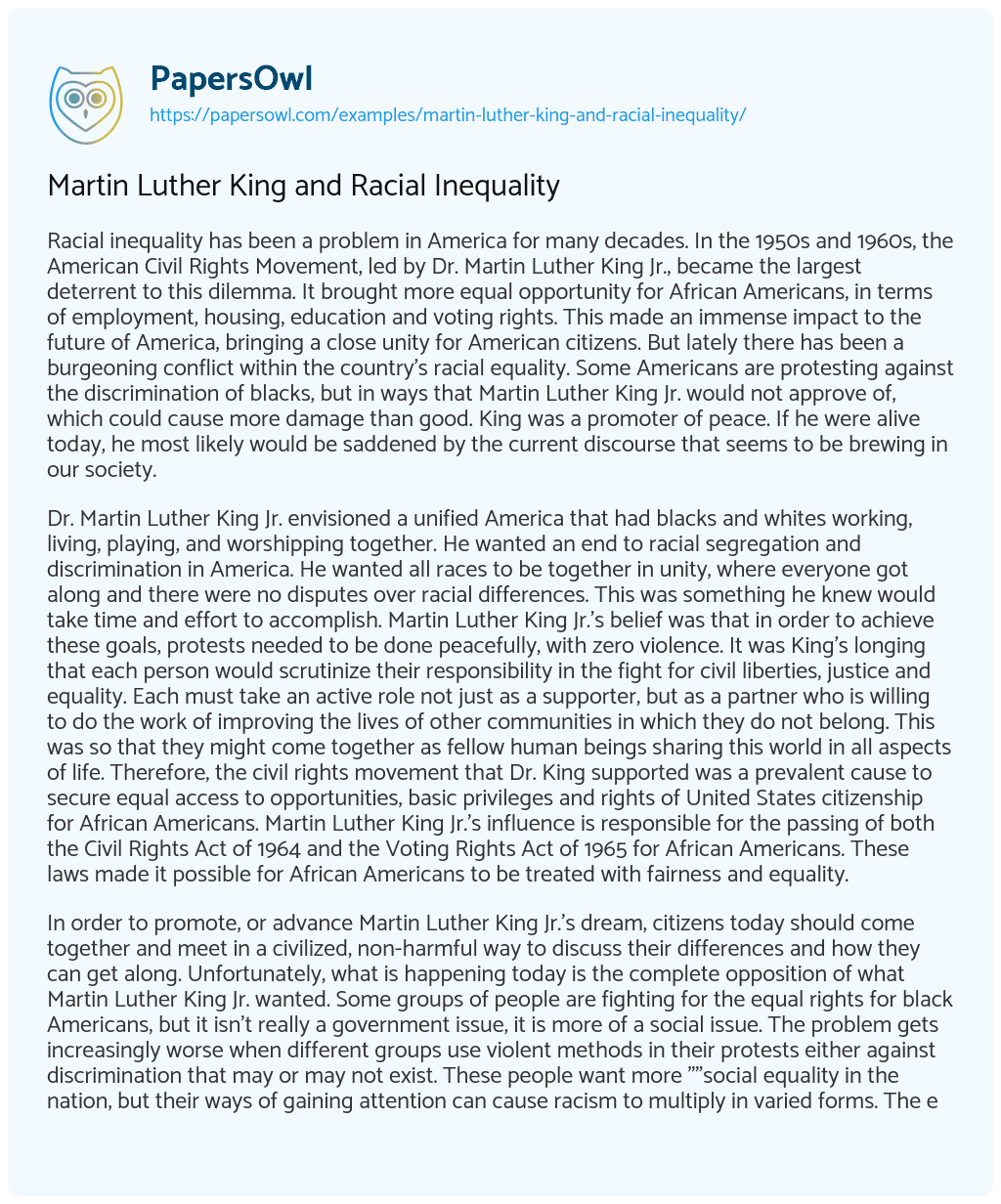 Racial inequality has been a problem in America for many decades. In the 1950s and 1960s, the American Civil Rights Movement, led by Dr. Martin Luther King Jr., became the largest deterrent to this dilemma. It brought more equal opportunity for African Americans, in terms of employment, housing, education and voting rights. This made an immense impact to the future of America, bringing a close unity for American citizens. But lately there has been a burgeoning conflict within the country’s racial equality. Some Americans are protesting against the discrimination of blacks, but in ways that Martin Luther King Jr. would not approve of, which could cause more damage than good. King was a promoter of peace. If he were alive today, he most likely would be saddened by the current discourse that seems to be brewing in our society.

Dr. Martin Luther King Jr. envisioned a unified America that had blacks and whites working, living, playing, and worshipping together. He wanted an end to racial segregation and discrimination in America. He wanted all races to be together in unity, where everyone got along and there were no disputes over racial differences. This was something he knew would take time and effort to accomplish. Martin Luther King Jr.’s belief was that in order to achieve these goals, protests needed to be done peacefully, with zero violence. It was King’s longing that each person would scrutinize their responsibility in the fight for civil liberties, justice and equality. Each must take an active role not just as a supporter, but as a partner who is willing to do the work of improving the lives of other communities in which they do not belong. This was so that they might come together as fellow human beings sharing this world in all aspects of life. Therefore, the civil rights movement that Dr. King supported was a prevalent cause to secure equal access to opportunities, basic privileges and rights of United States citizenship for African Americans. Martin Luther King Jr.’s influence is responsible for the passing of both the Civil Rights Act of 1964 and the Voting Rights Act of 1965 for African Americans. These laws made it possible for African Americans to be treated with fairness and equality.

In order to promote, or advance Martin Luther King Jr.’s dream, citizens today should come together and meet in a civilized, non-harmful way to discuss their differences and how they can get along. Unfortunately, what is happening today is the complete opposition of what Martin Luther King Jr. wanted. Some groups of people are fighting for the equal rights for black Americans, but it isn’t really a government issue, it is more of a social issue. The problem gets increasingly worse when different groups use violent methods in their protests either against discrimination that may or may not exist. These people want more “”social equality in the nation, but their ways of gaining attention can cause racism to multiply in varied forms. The equality that Dr. King wanted gets swept away because instead of peaceful actions, some groups have become violent in their words and actions. These actions do not unite America, all that gets done is the creation of more internal conflict inside the country. For America to fully unite and advance upon Martin Luther King Jr.’s dream, Americans need to stop fighting and make peace with each other. One way for complete unification to take form is for the comprehensive removal of these violent acts. Representatives from different sides need to come together and meet in a way that is more like Martin Luther King Jr.’s expectations. So, beyond meeting together, Americans today should practice the acts of simple deeds of kindness no matter the differences of people they encounter on a day to day basis.

In conclusion, Dr. Martin Luther King Jr.’s hopes for the country have already basically come to fruition. In that, African Americans have the same rights as those of other races in the United States of America. His dreams of all races being together and being at the same level have been accomplished. Like most hate in the world, racism in certain communities will unfortunately never go away. There will always be someone that will think of their race as being superior. But as a peaceful community, racism should never win over a perfect union. Because as Martin Luther King Jr. believed, non-violence is the key for a united America. As Helen Keller stated, “”I am only one, but still I am one. I cannot do everything, but still I can do something; and because I cannot do everything, I will not refuse to do something that I can do. Therefore, if each person strives to make a positive difference by showing kindness to those they encounter in their everyday lives, each of us could see a change for the better grow little by little until we are surrounded by peace.