How Successful was Martin Luther King’s? 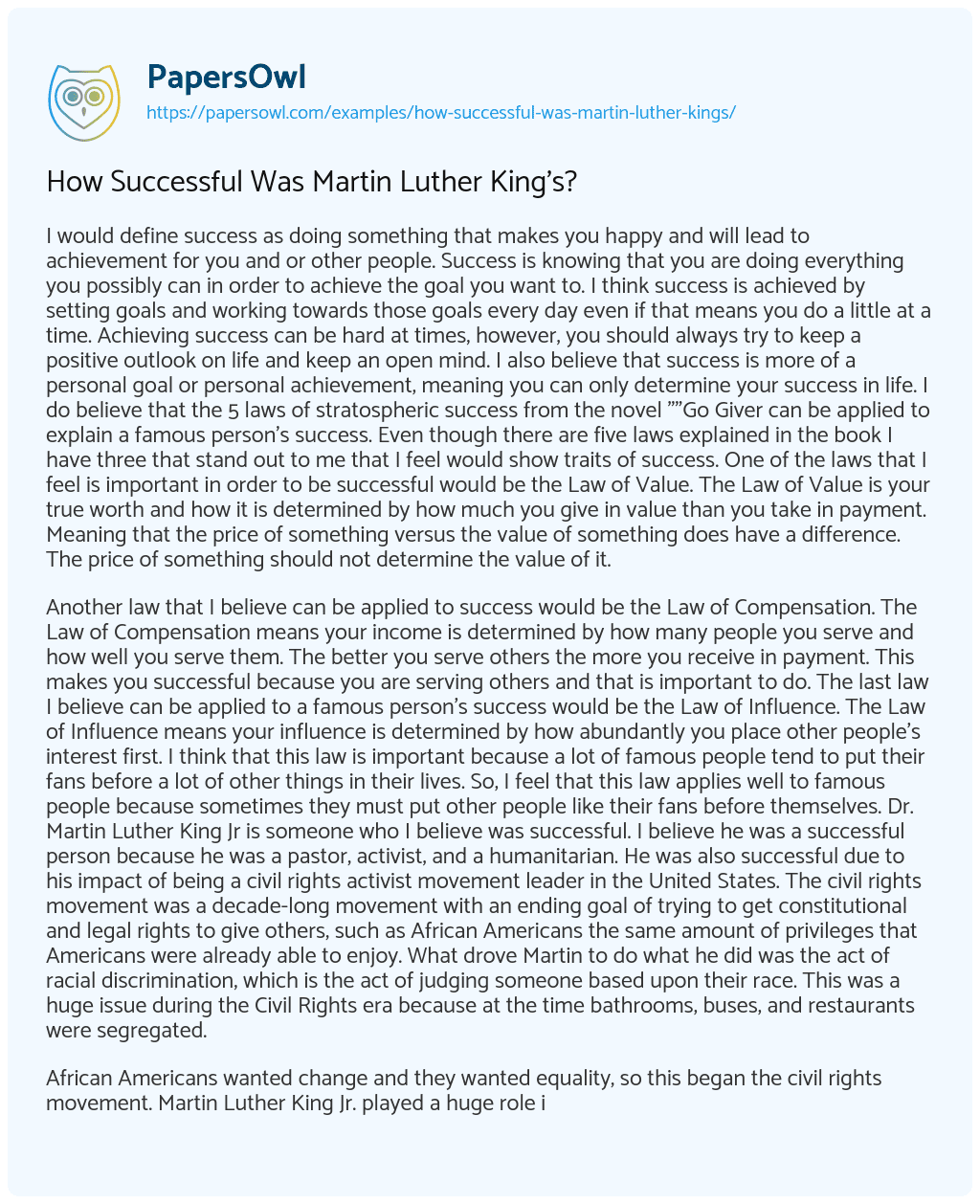 I would define success as doing something that makes you happy and will lead to achievement for you and or other people. Success is knowing that you are doing everything you possibly can in order to achieve the goal you want to. I think success is achieved by setting goals and working towards those goals every day even if that means you do a little at a time. Achieving success can be hard at times, however, you should always try to keep a positive outlook on life and keep an open mind. I also believe that success is more of a personal goal or personal achievement, meaning you can only determine your success in life. I do believe that the 5 laws of stratospheric success from the novel “”Go Giver can be applied to explain a famous person’s success. Even though there are five laws explained in the book I have three that stand out to me that I feel would show traits of success. One of the laws that I feel is important in order to be successful would be the Law of Value. The Law of Value is your true worth and how it is determined by how much you give in value than you take in payment. Meaning that the price of something versus the value of something does have a difference. The price of something should not determine the value of it.

Another law that I believe can be applied to success would be the Law of Compensation. The Law of Compensation means your income is determined by how many people you serve and how well you serve them. The better you serve others the more you receive in payment. This makes you successful because you are serving others and that is important to do. The last law I believe can be applied to a famous person’s success would be the Law of Influence. The Law of Influence means your influence is determined by how abundantly you place other people’s interest first. I think that this law is important because a lot of famous people tend to put their fans before a lot of other things in their lives. So, I feel that this law applies well to famous people because sometimes they must put other people like their fans before themselves. Dr. Martin Luther King Jr is someone who I believe was successful. I believe he was a successful person because he was a pastor, activist, and a humanitarian. He was also successful due to his impact of being a civil rights activist movement leader in the United States. The civil rights movement was a decade-long movement with an ending goal of trying to get constitutional and legal rights to give others, such as African Americans the same amount of privileges that Americans were already able to enjoy. What drove Martin to do what he did was the act of racial discrimination, which is the act of judging someone based upon their race. This was a huge issue during the Civil Rights era because at the time bathrooms, buses, and restaurants were segregated.

African Americans wanted change and they wanted equality, so this began the civil rights movement. Martin Luther King Jr. played a huge role in the Civil Rights Movement because he was a Civil Rights activist along with Rosa Parks and Malcolm X (Bush 2013). Along with the Civil Rights Movement, Martin was able to effectively lead nonviolent protests which helped him gain support from other African Americans who felt the same way and wanted change. Some of Martin Luther King Jr’s achievements was he provided leadership in the Montgomery bus boycott, which took place in 1955. The Montgomery Bus Boycott was a boycott against city buses that did not allow African Americans to sit in the front seats of the bus. During this protest, it gained followers and led to a city-wide boycott until rules were changed (Boycott 2018). Once King and his followers eventually were sent to jail the boycott finally succeeded and the racial law about segregation on buses was eventually changed. This was a big success for the movement at the time and gained national attention. He also helped establish the Southern Christian Leadership Conference in 1957 this was an organization that supported the philosophy of nonviolent acts.

Martin was the president of the Southern Christian Leadership Conference because no one else wanted to take the role, so he stepped up and took the position. Martin used his power and his education to influence others in a nonviolent way. Martin Luther King’s vision was that he had a dream to end racism and he just wanted the African American community to one day be treated equally. Martin wrote the I Have A Dream Speech In hopes that one day it would abolish racism (Bush 2014). He gave his “”I Have A Dream speech on August 28, 1963, in Washington DC where a massive group of civil rights marchers gathered around at the Lincoln Memorial to listen to his speech (Bush, 2013). It was estimated that about 250,000 people were there in Washington D.C to listen to Martin’s speech. His speech became one of the most famous speeches in history and in a year after he gave his speech in 1964 the Civil Rights Act was passed.

Martin Luther King Jr. achieved many other things like being the youngest person to be awarded the Nobel Peace Price in 1964. He was honored with this award for his nonviolent take on achieving racial justice in America (collegian 2005). Another thing he achieved is having his own national holiday named after him in honor of what he did for African Americans. This holiday is planned on the third Monday of January which is around the date of King’s birthday which is January 15th. About forty years ago he was awarded the Congressional Gold Medal and about a decade later he received the Presidential Medal of Freedom. Martin also wrote five books and published several articles in his lifetime. He was a very successful man and changed society forever. I think that Dr. Martin Luther King Jr. would apply most to the law of authenticity. I say this because the law of authenticity means being real and true to others. I think that Martin applies to this law the most because he was true to himself, he knew exactly what he wanted to change, and he wasn’t willing to give up until he achieved it. In Martin Luther’s “”I Have a Dream speech he told people exactly how he felt and shared his ideal dream with America. His speech I think he also would apply to the law of compensation. The law of compensation means how you serve others and how well you serve them.

Furthermore, on April 4,1968 Martin Luther King Jr. was assassinated in a hotel in Memphis, Tennessee. A bullet struck Martin in the neck at about two hundred feet away. He was rushed to St. Joseph’s Hospital however, was pronounced dead at around seven o’clock that night. A man by the name of James Earl Ray was convicted of assassinating King after he confessed to the crime on March 10, 1969 on his forty-first birthday (Burnham 1999). Martin was only 39 years old when he passed, he left behind his four children and his wife. In conclusion, “”I have a dream that my four little children will one day live in a nation where they will not be judged by the color of their skin, but by the content of their character. Dr Martin Luther King Jr. impacted so many people. Even though King lived a short life he made a huge impact on society and changed history forever.

How Successful Was Martin Luther King's?. (2019, Mar 05). Retrieved from https://papersowl.com/examples/how-successful-was-martin-luther-kings/