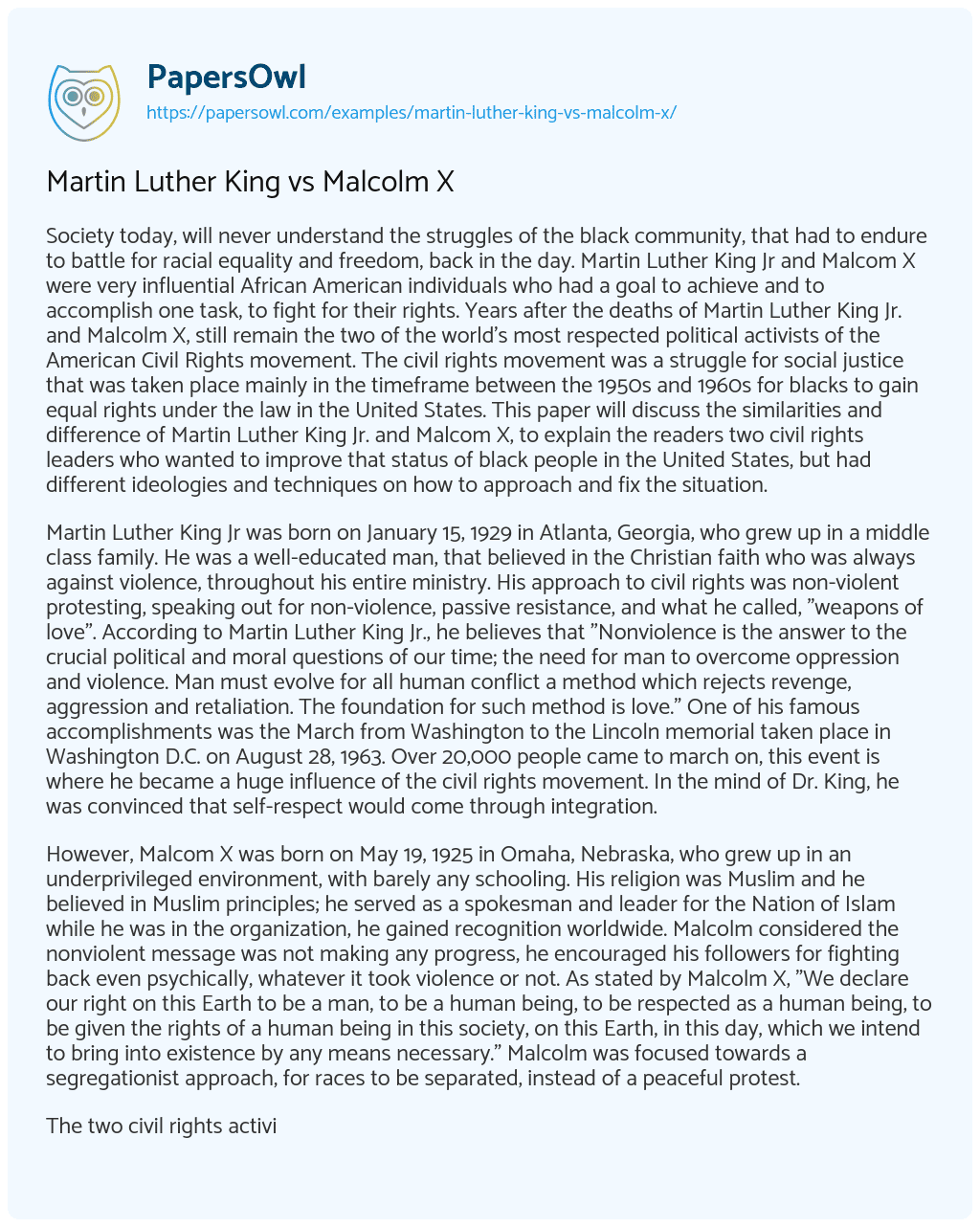 Society today, will never understand the struggles of the black community, that had to endure to battle for racial equality and freedom, back in the day. Martin Luther King Jr and Malcom X were very influential African American individuals who had a goal to achieve and to accomplish one task, to fight for their rights. Years after the deaths of Martin Luther King Jr. and Malcolm X, still remain the two of the world’s most respected political activists of the American Civil Rights movement. The civil rights movement was a struggle for social justice that was taken place mainly in the timeframe between the 1950s and 1960s for blacks to gain equal rights under the law in the United States. This paper will discuss the similarities and difference of Martin Luther King Jr. and Malcom X, to explain the readers two civil rights leaders who wanted to improve that status of black people in the United States, but had different ideologies and techniques on how to approach and fix the situation.

Martin Luther King Jr was born on January 15, 1929 in Atlanta, Georgia, who grew up in a middle class family. He was a well-educated man, that believed in the Christian faith who was always against violence, throughout his entire ministry. His approach to civil rights was non-violent protesting, speaking out for non-violence, passive resistance, and what he called, “weapons of love”. According to Martin Luther King Jr., he believes that “Nonviolence is the answer to the crucial political and moral questions of our time; the need for man to overcome oppression and violence. Man must evolve for all human conflict a method which rejects revenge, aggression and retaliation. The foundation for such method is love.” One of his famous accomplishments was the March from Washington to the Lincoln memorial taken place in Washington D.C. on August 28, 1963. Over 20,000 people came to march on, this event is where he became a huge influence of the civil rights movement. In the mind of Dr. King, he was convinced that self-respect would come through integration.

However, Malcom X was born on May 19, 1925 in Omaha, Nebraska, who grew up in an underprivileged environment, with barely any schooling. His religion was Muslim and he believed in Muslim principles; he served as a spokesman and leader for the Nation of Islam while he was in the organization, he gained recognition worldwide. Malcolm considered the nonviolent message was not making any progress, he encouraged his followers for fighting back even psychically, whatever it took violence or not. As stated by Malcolm X, “We declare our right on this Earth to be a man, to be a human being, to be respected as a human being, to be given the rights of a human being in this society, on this Earth, in this day, which we intend to bring into existence by any means necessary.” Malcolm was focused towards a segregationist approach, for races to be separated, instead of a peaceful protest.

The two civil rights activists shared a common goal, and there was no waiting, it had to be done. Dr. King and Malcom X knew racism was the biggest issue that had to be fixed, with the support of millions of followers. Unlike their differences of religion, the independent strong leaders had their own spiritual beliefs. Meanwhile, Malcolm X was older than Martin Luther King Jr., they were both assassinated at the same age. Malcolm was 39 when the members of the Nation of Islam gunned him down on February 21, 1965 as he gave his speech at the Audubon Ballroom in Manhattan. King was 39 as well, when James Earl Ray shot him down on April 4 1968, as he stood on the balcony of the Lorraine Motel in Memphis, Tennessee; he was in town to support striking African American sanitation workers. As Martin Luther King Jr, and Malcom X may have different takes on nonviolence, the two prominent leaders shared a great deal of similarities.

In conclusion, these men had a major influence on the civil rights movement causing these two to go down in history as heroes. The voices of King and X are even heard in modern day society and still impact individuals to have equality and give the people a chance to be who they want to be, with nobody stopping them, today. They gained justice and equality, as they were respected for their fight for freedom.