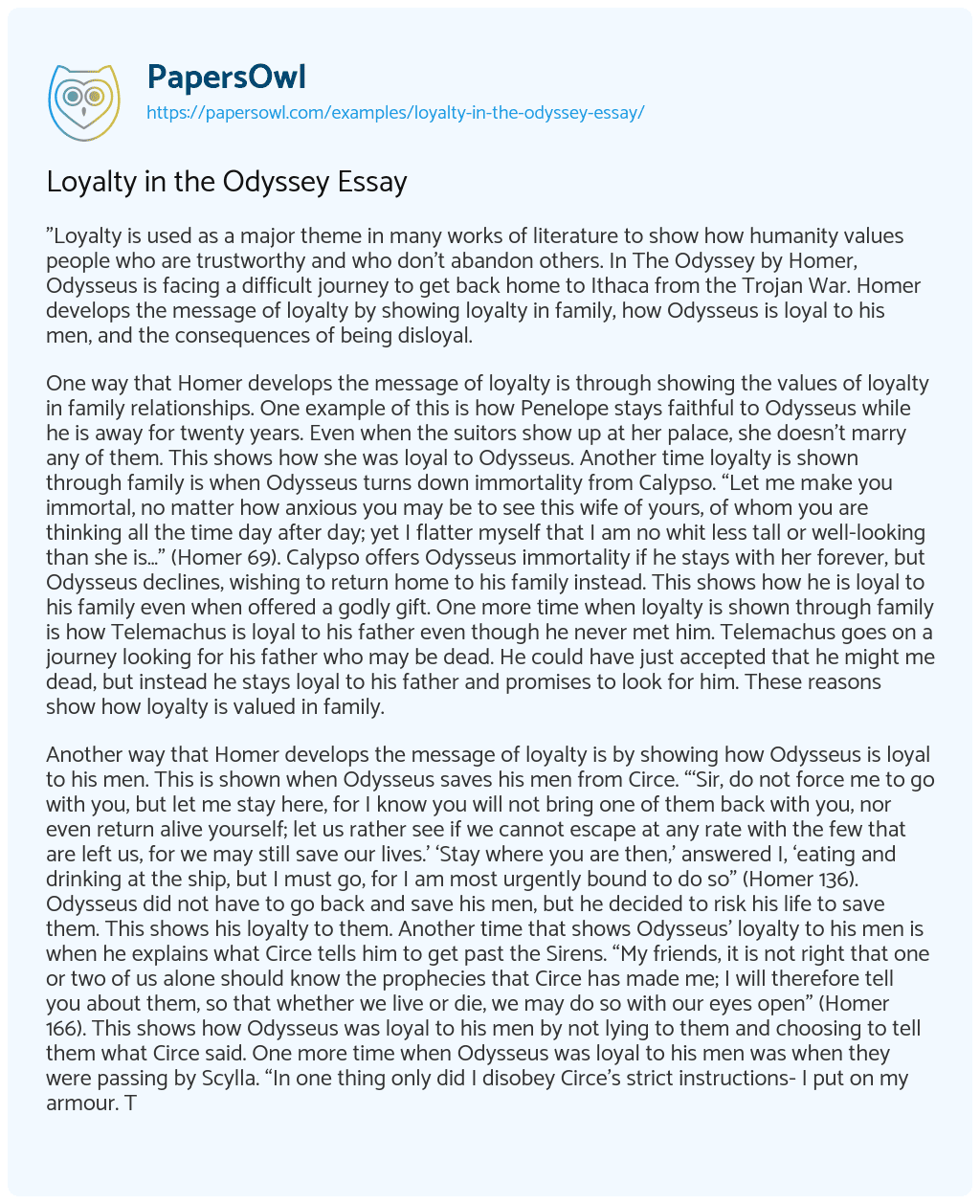 “Loyalty is used as a major theme in many works of literature to show how humanity values people who are trustworthy and who don’t abandon others. In The Odyssey by Homer, Odysseus is facing a difficult journey to get back home to Ithaca from the Trojan War. Homer develops the message of loyalty by showing loyalty in family, how Odysseus is loyal to his men, and the consequences of being disloyal.

One way that Homer develops the message of loyalty is through showing the values of loyalty in family relationships. One example of this is how Penelope stays faithful to Odysseus while he is away for twenty years. Even when the suitors show up at her palace, she doesn’t marry any of them. This shows how she was loyal to Odysseus. Another time loyalty is shown through family is when Odysseus turns down immortality from Calypso. “Let me make you immortal, no matter how anxious you may be to see this wife of yours, of whom you are thinking all the time day after day; yet I flatter myself that I am no whit less tall or well-looking than she is…” (Homer 69). Calypso offers Odysseus immortality if he stays with her forever, but Odysseus declines, wishing to return home to his family instead. This shows how he is loyal to his family even when offered a godly gift. One more time when loyalty is shown through family is how Telemachus is loyal to his father even though he never met him. Telemachus goes on a journey looking for his father who may be dead. He could have just accepted that he might me dead, but instead he stays loyal to his father and promises to look for him. These reasons show how loyalty is valued in family.

Another way that Homer develops the message of loyalty is by showing how Odysseus is loyal to his men. This is shown when Odysseus saves his men from Circe. “‘Sir, do not force me to go with you, but let me stay here, for I know you will not bring one of them back with you, nor even return alive yourself; let us rather see if we cannot escape at any rate with the few that are left us, for we may still save our lives.’ ‘Stay where you are then,’ answered I, ‘eating and drinking at the ship, but I must go, for I am most urgently bound to do so” (Homer 136). Odysseus did not have to go back and save his men, but he decided to risk his life to save them. This shows his loyalty to them. Another time that shows Odysseus’ loyalty to his men is when he explains what Circe tells him to get past the Sirens. “My friends, it is not right that one or two of us alone should know the prophecies that Circe has made me; I will therefore tell you about them, so that whether we live or die, we may do so with our eyes open” (Homer 166). This shows how Odysseus was loyal to his men by not lying to them and choosing to tell them what Circe said. One more time when Odysseus was loyal to his men was when they were passing by Scylla. “In one thing only did I disobey Circe’s strict instructions- I put on my armour. Then seizing two string spears, I took my stand on the ship’s bows, for it was there that I expected first to see the monster of the rock, who was to do my men so much harm” (Homer 168). Odysseus, knowing that Scylla would attack them, could have hidden in the ship and not stood with his men, but he was loyal to them and decided that if his men were risking their lives, he would too. These moments show how Odysseus was loyal to his men and further Homer’s message of loyalty.

One final way that Homer develops the message of loyalty is through showing the consequences of being disloyal. One example of being disloyal is when Odysseus’ men don’t trust him and look in the bag that he got from Aeolus. “Let us see what it all is, and how much gold and silver there is in the sack he gave him. Thus they talked and evil counsels prevailed. They loosed the sack, whereupon the winds flew howling forth and raised a storm that carried us weeping out to sea and away from our own country” (Homer 130). This shows how the men were punished by being disloyal to Odysseus. Another time when disloyalty is shown is when Odysseus’ men are disloyal on the sun god’s island. They are told not to touch the cattle and they do. “Meanwhile Lampetie went straight off to the sun and told him we had been killing his cows, whereon he flew into a great rage, and said to the immortals, ‘Father Zeus, and all you other gods who live in everlasting bliss, I must have vengeance on the crew of Odysseus’ ship: they have had the insolence to kill my cows, which were the one thing I loved to look upon” (Homer 172). This shows how the men were disloyal to both Odysseus and the gods, and how the sun god had vengeance on them. One final example of disloyalty is the suitors who try to marry Penelope. Some of these suitors are men from Ithaca, who are being disloyal to Odysseus by trying to marry his wife just because they don’t believe he is alive. “Listen to me, you suitors, who persist in abusing the hospitality of this house because its owner has been long absent, and without other pretext than that you want to marry me” (Homer 290). This shows how the suitors are disloyal to Odysseus. They are ultimately punished when Odysseus comes back and kills all the suitors. These reasons show how being disloyal comes with consequences and strengthens Homer’s message of loyalty.

Loyalty in the Odyssey Essay. (2021, Mar 19). Retrieved from https://papersowl.com/examples/loyalty-in-the-odyssey-essay/

Loyalty in the Odyssey