Loyalty in the Odyssey 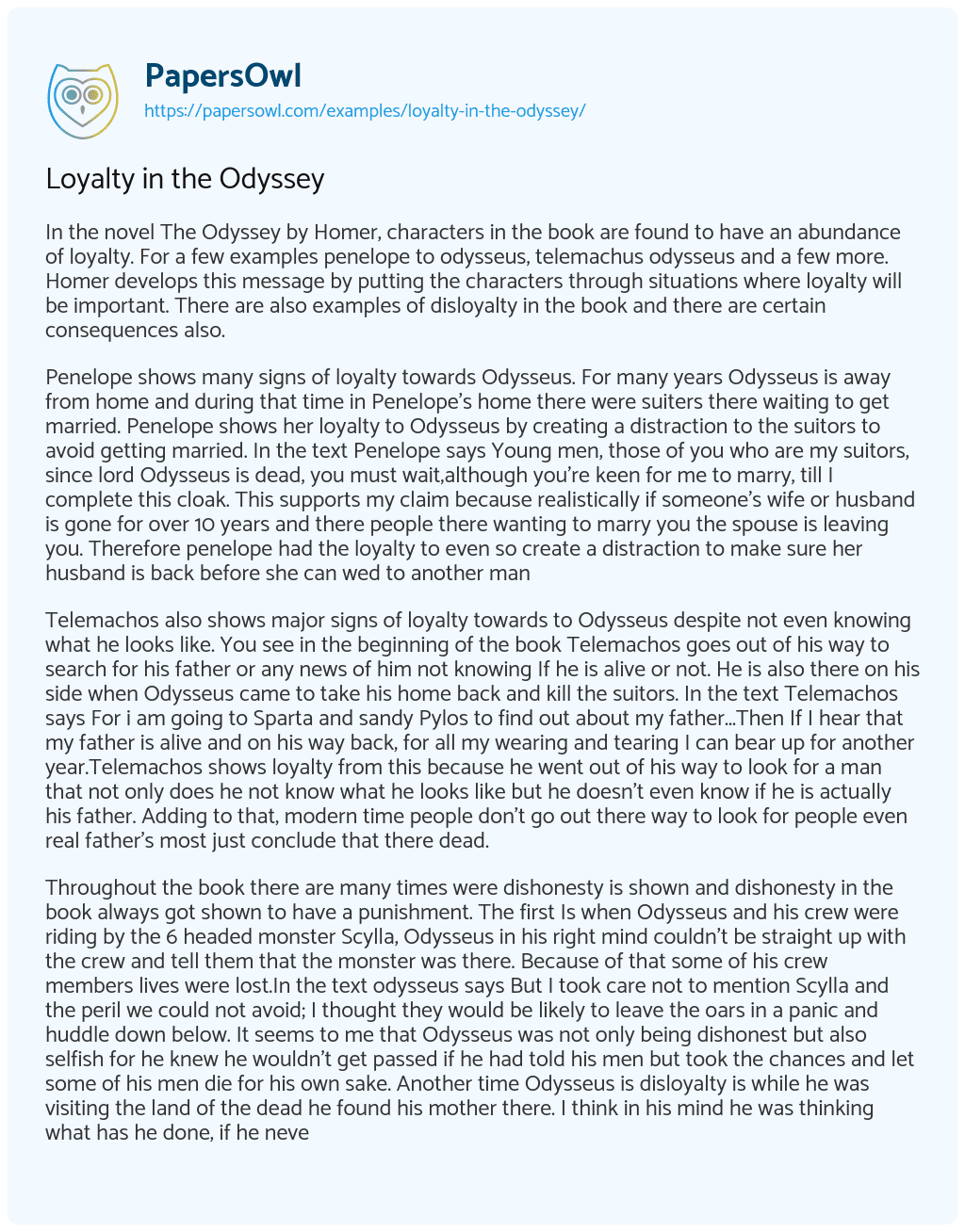 In the novel The Odyssey by Homer, characters in the book are found to have an abundance of loyalty. For a few examples penelope to odysseus, telemachus odysseus and a few more. Homer develops this message by putting the characters through situations where loyalty will be important. There are also examples of disloyalty in the book and there are certain consequences also.

Penelope shows many signs of loyalty towards Odysseus. For many years Odysseus is away from home and during that time in Penelope’s home there were suiters there waiting to get married. Penelope shows her loyalty to Odysseus by creating a distraction to the suitors to avoid getting married. In the text Penelope says Young men, those of you who are my suitors, since lord Odysseus is dead, you must wait,although you’re keen for me to marry, till I complete this cloak. This supports my claim because realistically if someone’s wife or husband is gone for over 10 years and there people there wanting to marry you the spouse is leaving you. Therefore penelope had the loyalty to even so create a distraction to make sure her husband is back before she can wed to another man

Telemachos also shows major signs of loyalty towards to Odysseus despite not even knowing what he looks like. You see in the beginning of the book Telemachos goes out of his way to search for his father or any news of him not knowing If he is alive or not. He is also there on his side when Odysseus came to take his home back and kill the suitors. In the text Telemachos says For i am going to Sparta and sandy Pylos to find out about my father…Then If I hear that my father is alive and on his way back, for all my wearing and tearing I can bear up for another year.Telemachos shows loyalty from this because he went out of his way to look for a man that not only does he not know what he looks like but he doesn’t even know if he is actually his father. Adding to that, modern time people don’t go out there way to look for people even real father’s most just conclude that there dead.

Throughout the book there are many times were dishonesty is shown and dishonesty in the book always got shown to have a punishment. The first Is when Odysseus and his crew were riding by the 6 headed monster Scylla, Odysseus in his right mind couldn’t be straight up with the crew and tell them that the monster was there. Because of that some of his crew members lives were lost.In the text odysseus says But I took care not to mention Scylla and the peril we could not avoid; I thought they would be likely to leave the oars in a panic and huddle down below. It seems to me that Odysseus was not only being dishonest but also selfish for he knew he wouldn’t get passed if he had told his men but took the chances and let some of his men die for his own sake. Another time Odysseus is disloyalty is while he was visiting the land of the dead he found his mother there. I think in his mind he was thinking what has he done, if he never stayed at Circe’s island for that long he could have came home to his mother alive. In the text it says Then there came up the spirit of my dead mother, Anticleia, the daughter of great-hearted Autolycus, whom I had left alive when I departed for sacred Ilios. At sight of her I wept, and my heart had compassion on her.At this point i really feel like Odysseus was thinking how much he messed up and how he could have avoided this situation. If he had been loyal enough to think about even getting home as soon as possible but instead proceeds to stay on circe’s island for longer than he should have I resulted in his mother’s death

The book had many signs of loyalty . Telemachus and Penelope both stayed loyal to Odysseus. But there were also times of disloyalty Odysseus was dishonest to his crew at some time. I think homers message from the examples of loyalty and disloyalty was seen through the book as an impact on what was going on around with other characters.

Loyalty in the Odyssey. (2019, Jul 26). Retrieved from https://papersowl.com/examples/loyalty-in-the-odyssey/