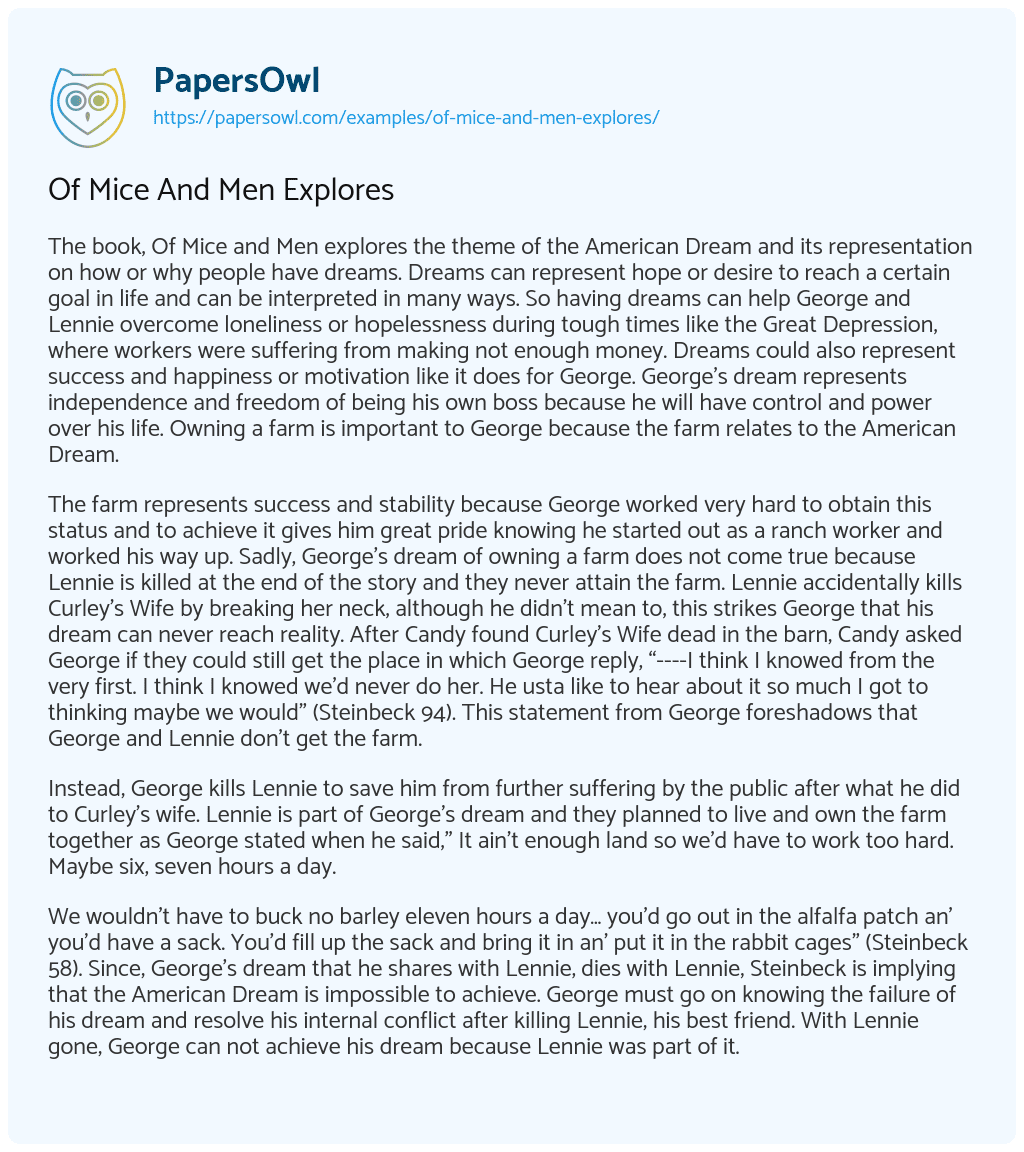 The book, Of Mice and Men explores the theme of the American Dream and its representation on how or why people have dreams. Dreams can represent hope or desire to reach a certain goal in life and can be interpreted in many ways. So having dreams can help George and Lennie overcome loneliness or hopelessness during tough times like the Great Depression, where workers were suffering from making not enough money. Dreams could also represent success and happiness or motivation like it does for George. George’s dream represents independence and freedom of being his own boss because he will have control and power over his life. Owning a farm is important to George because the farm relates to the American Dream.

The farm represents success and stability because George worked very hard to obtain this status and to achieve it gives him great pride knowing he started out as a ranch worker and worked his way up. Sadly, George’s dream of owning a farm does not come true because Lennie is killed at the end of the story and they never attain the farm. Lennie accidentally kills Curley’s Wife by breaking her neck, although he didn’t mean to, this strikes George that his dream can never reach reality. After Candy found Curley’s Wife dead in the barn, Candy asked George if they could still get the place in which George reply, “—-I think I knowed from the very first. I think I knowed we’d never do her. He usta like to hear about it so much I got to thinking maybe we would” (Steinbeck 94). This statement from George foreshadows that George and Lennie don’t get the farm.

Instead, George kills Lennie to save him from further suffering by the public after what he did to Curley’s wife. Lennie is part of George’s dream and they planned to live and own the farm together as George stated when he said,” It ain’t enough land so we’d have to work too hard. Maybe six, seven hours a day.

We wouldn’t have to buck no barley eleven hours a day… you’d go out in the alfalfa patch an’ you’d have a sack. You’d fill up the sack and bring it in an’ put it in the rabbit cages” (Steinbeck 58). Since, George’s dream that he shares with Lennie, dies with Lennie, Steinbeck is implying that the American Dream is impossible to achieve. George must go on knowing the failure of his dream and resolve his internal conflict after killing Lennie, his best friend. With Lennie gone, George can not achieve his dream because Lennie was part of it.

Of Mice And Men Explores. (2019, Jul 27). Retrieved from https://papersowl.com/examples/of-mice-and-men-explores/