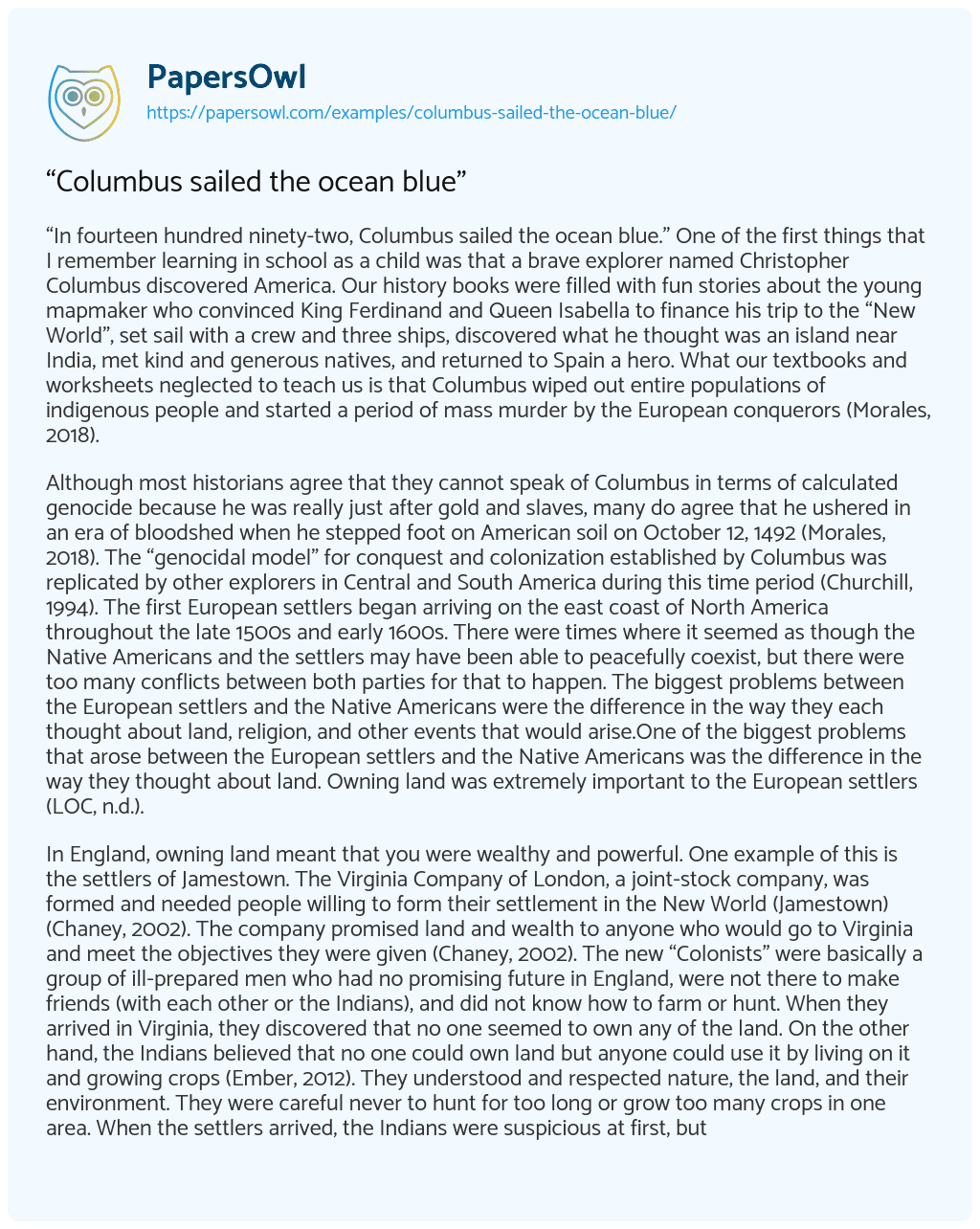 “In fourteen hundred ninety-two, Columbus sailed the ocean blue.” One of the first things that I remember learning in school as a child was that a brave explorer named Christopher Columbus discovered America. Our history books were filled with fun stories about the young mapmaker who convinced King Ferdinand and Queen Isabella to finance his trip to the “New World”, set sail with a crew and three ships, discovered what he thought was an island near India, met kind and generous natives, and returned to Spain a hero. What our textbooks and worksheets neglected to teach us is that Columbus wiped out entire populations of indigenous people and started a period of mass murder by the European conquerors (Morales, 2018).

Although most historians agree that they cannot speak of Columbus in terms of calculated genocide because he was really just after gold and slaves, many do agree that he ushered in an era of bloodshed when he stepped foot on American soil on October 12, 1492 (Morales, 2018). The “genocidal model” for conquest and colonization established by Columbus was replicated by other explorers in Central and South America during this time period (Churchill, 1994). The first European settlers began arriving on the east coast of North America throughout the late 1500s and early 1600s. There were times where it seemed as though the Native Americans and the settlers may have been able to peacefully coexist, but there were too many conflicts between both parties for that to happen. The biggest problems between the European settlers and the Native Americans were the difference in the way they each thought about land, religion, and other events that would arise.One of the biggest problems that arose between the European settlers and the Native Americans was the difference in the way they thought about land. Owning land was extremely important to the European settlers (LOC, n.d.).

In England, owning land meant that you were wealthy and powerful. One example of this is the settlers of Jamestown. The Virginia Company of London, a joint-stock company, was formed and needed people willing to form their settlement in the New World (Jamestown) (Chaney, 2002). The company promised land and wealth to anyone who would go to Virginia and meet the objectives they were given (Chaney, 2002). The new “Colonists” were basically a group of ill-prepared men who had no promising future in England, were not there to make friends (with each other or the Indians), and did not know how to farm or hunt. When they arrived in Virginia, they discovered that no one seemed to own any of the land. On the other hand, the Indians believed that no one could own land but anyone could use it by living on it and growing crops (Ember, 2012). They understood and respected nature, the land, and their environment. They were careful never to hunt for too long or grow too many crops in one area. When the settlers arrived, the Indians were suspicious at first, but then decided to help them by showing them how to plant crops and survive there (Ember, 2012). The Indians did not realize that the settlers were going to keep the land – this was an entirely foreign concept to them. As the years passed, more settlers arrived and took more land. They cut down trees to clear forest areas to make land fit for planting tobacco, expanded their settlements, killed more animals, and demanded that the Indians stay off “their land”(Ember, 2012).

One problem was disease. Europeans had taken care of domestic animals for thousands of years, lived in more densely populated areas, and moved around fairly often (or at least used products that had traveled) (Upton, 2015). They were regularly exposed to more pathogens than the Indians and their immune systems had developed to ward off many diseases. Diseases such as smallpox, influenza, measles, and even the chicken pox killed the Native Americans (Upton, 2015). These diseases also killed many Europeans as well, but most had at least some immunity toward them so not as many people died at one time. Disease spread like wildfire through the Indians, sometimes killing entire villages in a matter of days. Another serious of events that led to problems between the two groups was that one or the other always thought they were under attack. In nearly every settlement along the coast, the two groups would meet as friends, trade food or tools, and help each other (Ember, 2012).

Eventually something would happen – one settler and one Indian would get into an argument and someone would get killed, fear would replace friendship, one side or the other would react to the perceived “attack”, and they would no longer get along (Ember, 2012). There were many conflicts during these early years in America between the Colonists and Native Americans. Unfortunately, time was not a friend to the Native Americans and they haven’t really fared much better over the years. They are still fighting loss of the little land they have left and face many issues such as high rates of poverty and unemployment, domestic violence, poor quality housing, a failing education system, inadequate health care, and substance abuse. It seems as if they have been suffering at the hands of the government Elites since the very first “Elite’s” arrived here so long ago.