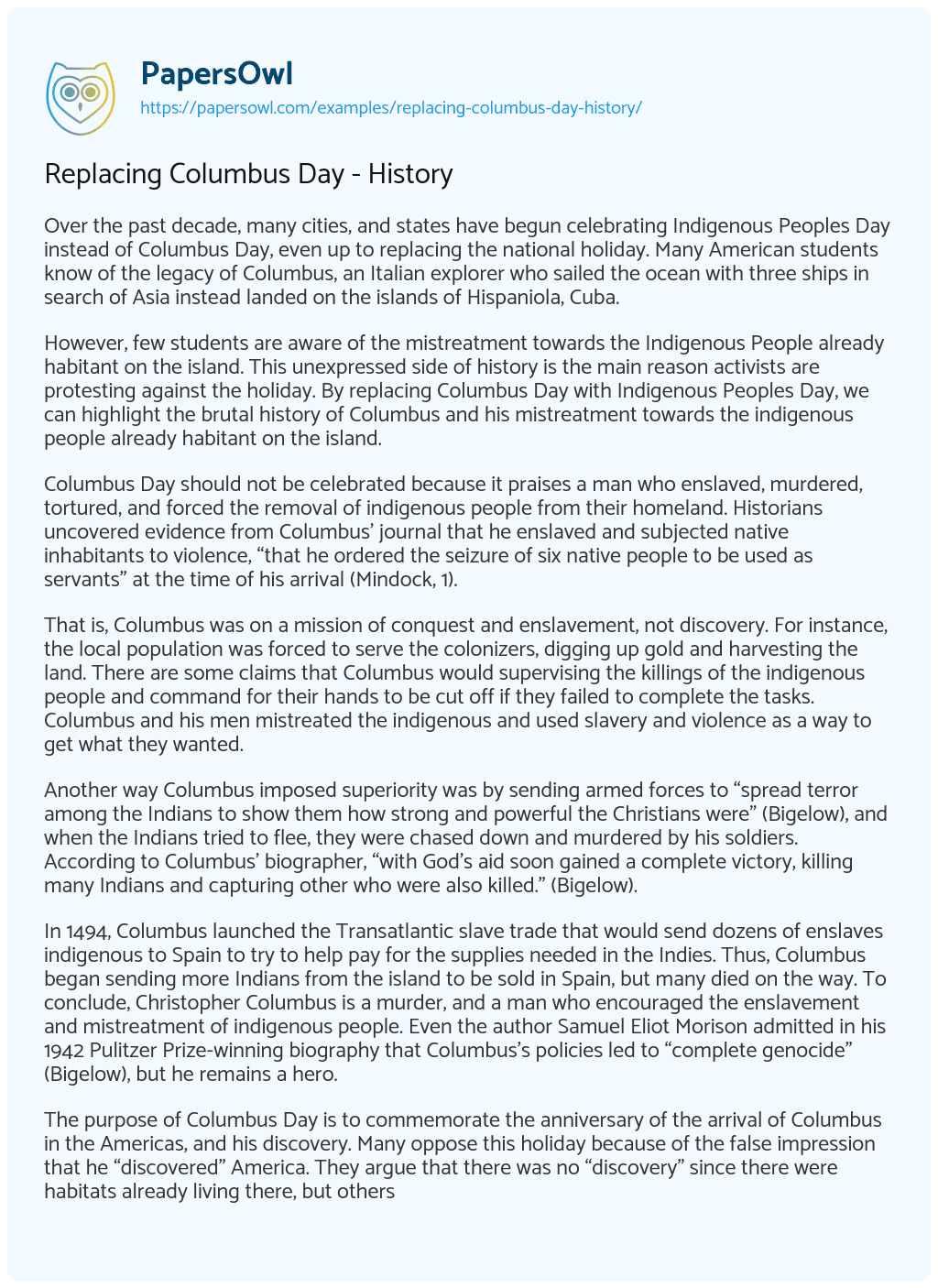 Over the past decade, many cities, and states have begun celebrating Indigenous Peoples Day instead of Columbus Day, even up to replacing the national holiday. Many American students know of the legacy of Columbus, an Italian explorer who sailed the ocean with three ships in search of Asia instead landed on the islands of Hispaniola, Cuba.

Columbus Day should not be celebrated because it praises a man who enslaved, murdered, tortured, and forced the removal of indigenous people from their homeland. Historians uncovered evidence from Columbus’ journal that he enslaved and subjected native inhabitants to violence, “that he ordered the seizure of six native people to be used as servants” at the time of his arrival (Mindock, 1).

That is, Columbus was on a mission of conquest and enslavement, not discovery. For instance, the local population was forced to serve the colonizers, digging up gold and harvesting the land. There are some claims that Columbus would supervising the killings of the indigenous people and command for their hands to be cut off if they failed to complete the tasks. Columbus and his men mistreated the indigenous and used slavery and violence as a way to get what they wanted.

Another way Columbus imposed superiority was by sending armed forces to “spread terror among the Indians to show them how strong and powerful the Christians were” (Bigelow), and when the Indians tried to flee, they were chased down and murdered by his soldiers. According to Columbus’ biographer, “with God’s aid soon gained a complete victory, killing many Indians and capturing other who were also killed.” (Bigelow).

In 1494, Columbus launched the Transatlantic slave trade that would send dozens of enslaves indigenous to Spain to try to help pay for the supplies needed in the Indies. Thus, Columbus began sending more Indians from the island to be sold in Spain, but many died on the way. To conclude, Christopher Columbus is a murder, and a man who encouraged the enslavement and mistreatment of indigenous people. Even the author Samuel Eliot Morison admitted in his 1942 Pulitzer Prize-winning biography that Columbus’s policies led to “complete genocide” (Bigelow), but he remains a hero.

The purpose of Columbus Day is to commemorate the anniversary of the arrival of Columbus in the Americas, and his discovery. Many oppose this holiday because of the false impression that he “discovered” America. They argue that there was no “discovery” since there were habitats already living there, but others argue that before his arrival the land was inhabited, unused, and undeveloped. There has been evidence that Leif Ericson, another European explorer, “founded settlement in Newfoundland, Canada around 500 years before the arrival of Columbus” (Kingston), which implies that Columbus wasn’t the first explorer to discover or land in the Americas.

By making Indigenous People’s Day official, it would help shed some light on the brutal history and mistreatment indigenous people had to endure from Christopher Columbus and his men, since most American schools do not teach their students about the truth of Columbus or the millions of people living in the Americans before European arrival and what happened to them throughout the following years.

All the previous information is long known and documented, but the American government does not require a thorough enough explanation of the history behind Columbus’ arrival in the Americas and his relationship with the Indigenous individuals and communities living there. Even, many schools still carry books that praise Columbus and mention nothing about the lives destroyed by European colonialism. His story remains acceptable because there is an unwillingness to critically testing the acceptable racism Columbus Day has on the Native population.

The anti-Columbus group would compare “Columbus Day to a holiday celebrating Hitler with parades in a Jewish community” (Robertson), as a way to help others understand their perspective of how harmful the holiday can be for generations. However, it doesn’t help how Indians are described as rude and crude wild animals in colonial documentation. This allows the public to see the settles as kind providers and furthers the false notions of indigenous as savages.

These historical myths of savagery allow the settler’s actions to be acceptable and legitimize the conquest, enslavement, and mass murder of Native Americans by powers in greed for more land and useful supplies. Nevertheless, just the survival of the diverse Native cultures and communities today “speaks to the power of counter-narrative that Indigenous People deploy against legitimized racism” (Robertson).

However, in the American perspective celebrating Columbus Day is not wrong or harmful because it celebrates the anniversary of the United States. It may be true that Columbus wasn’t the first explorer to land on the Americas, but he was the first to act and start a civilization. Columbus did display cruelty to the Indigenous groups he came across, but you cannot apply the moral principles of today to the morals of 1492. Our morals and standards are different.

Therefore, Columbus’ discovery and colonization was important because after his arrival there was a civilization of Western Europe that brought over “reason, science, self-reliance, individualism, ambition, [and] productive achievement” (Berliner), which would help develop into the United States of America.

However, if this was true, “If Indigenous peoples’ lives mattered in our society, and if Black people’s lives mattered in our society, it would be inconceivable that we would honor the father of the slave trade with a national holiday” (Bigelow). Columbus Day focuses on the beginning of America, which shaped history as we know it. Whether Columbus was good or bad, it still doesn’t change his actions of uniting two new worlds and starting a universal culture. Without Columbus, we wouldn’t be where we are today. We celebrate Columbus Day for when our identity as American started to take place, not the crimes of a single man.

In the eyes of many Native Americans, Columbus Day is a painful reminder of the history of colonization, and commemorating Christopher Columbus only approves of his actions of discrimination, enslavement, and genocide of the Indigenous that followed his arrival of the Americas. Renaming the holiday would bring attention to the public about the untruthful story behind the discovery and development of the Americas. The holiday would also honor the resilience and resistance of Indigenous people throughout history and America.