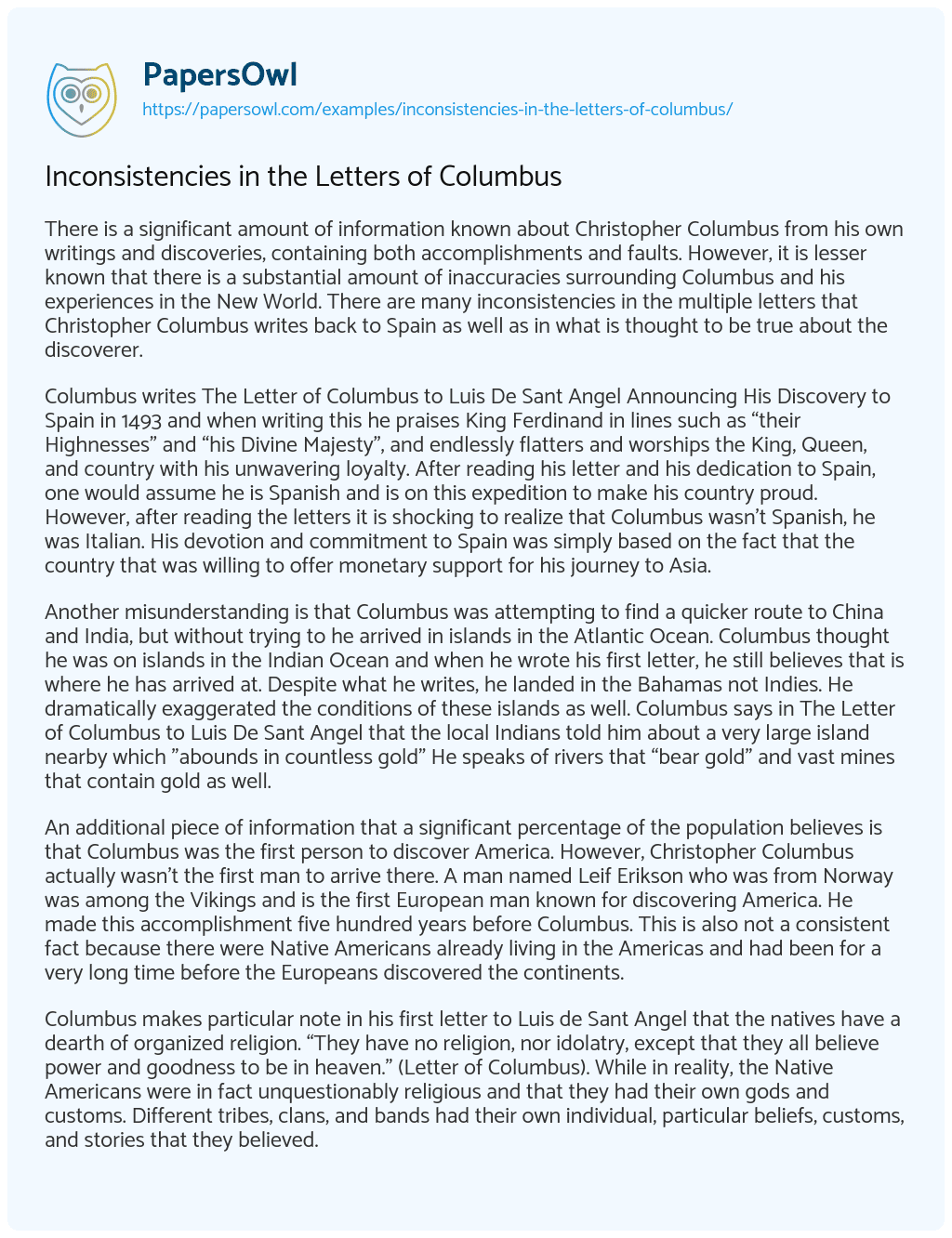 There is a significant amount of information known about Christopher Columbus from his own writings and discoveries, containing both accomplishments and faults. However, it is lesser known that there is a substantial amount of inaccuracies surrounding Columbus and his experiences in the New World. There are many inconsistencies in the multiple letters that Christopher Columbus writes back to Spain as well as in what is thought to be true about the discoverer.

Columbus writes The Letter of Columbus to Luis De Sant Angel Announcing His Discovery to Spain in 1493 and when writing this he praises King Ferdinand in lines such as “their Highnesses” and “his Divine Majesty”, and endlessly flatters and worships the King, Queen, and country with his unwavering loyalty. After reading his letter and his dedication to Spain, one would assume he is Spanish and is on this expedition to make his country proud. However, after reading the letters it is shocking to realize that Columbus wasn’t Spanish, he was Italian. His devotion and commitment to Spain was simply based on the fact that the country that was willing to offer monetary support for his journey to Asia.

Another misunderstanding is that Columbus was attempting to find a quicker route to China and India, but without trying to he arrived in islands in the Atlantic Ocean. Columbus thought he was on islands in the Indian Ocean and when he wrote his first letter, he still believes that is where he has arrived at. Despite what he writes, he landed in the Bahamas not Indies. He dramatically exaggerated the conditions of these islands as well. Columbus says in The Letter of Columbus to Luis De Sant Angel that the local Indians told him about a very large island nearby which “abounds in countless gold” He speaks of rivers that “bear gold” and vast mines that contain gold as well.

An additional piece of information that a significant percentage of the population believes is that Columbus was the first person to discover America. However, Christopher Columbus actually wasn’t the first man to arrive there. A man named Leif Erikson who was from Norway was among the Vikings and is the first European man known for discovering America. He made this accomplishment five hundred years before Columbus. This is also not a consistent fact because there were Native Americans already living in the Americas and had been for a very long time before the Europeans discovered the continents.

Columbus makes particular note in his first letter to Luis de Sant Angel that the natives have a dearth of organized religion. “They have no religion, nor idolatry, except that they all believe power and goodness to be in heaven.” (Letter of Columbus). While in reality, the Native Americans were in fact unquestionably religious and that they had their own gods and customs. Different tribes, clans, and bands had their own individual, particular beliefs, customs, and stories that they believed. The natives also had rituals they completed in their religions and passed them down from generation to generation. Some natives were monotheistic like Christians and others were polytheistic. Columbus also talks of plenty of communicating between him, the crew, and the Native Americans which seems unusual due to the Natives timidity and the language barrier.

Columbus notes in his letter that he tried to stop his sailors from manipulating the Indians’, and that he even gifted them with items of value, in order to make them well-disposed. He specifically states in his letter to King Ferdinand that he gave them these gifts, “so that they might be made Christians and incline full of love and service towards Our Highnesses and all the Castilian nation”. (Letter to King Ferdinand) Columbus also claims that “I protected them from all injury”. (Letters of Columbus). While all that is lovely, it is known now that he and his men enslaved many of the natives and forced them into Christianity specifically Catholicism. Columbus even writes that “They should be good servants …. I, our Lord being pleased, will take hence, at the time of my departure, six natives for your Highnesses.” (The Untold Story) So not only is he enslaving them for his own benefit, he is sending them back as gifts to King Ferdinand. Columbus either used the natives for his own benefit by making them slaves, converting them, or even killing them.

He spends such a great amount of time discussing certain things about the islands, such as the gold, because he is writing the letter to Luis de Sant Angel, the man who helped finance his voyage. Because he is speaking to his financial provider, he would want to please the man, so he is enforcing that it was worth the money spent on the journey and is attempting to encourage further support. In his first letter, Columbus writes to Luis de Sant Angel about his glorious success versus the harsh circumstances he and his crew are facing in the New World. The reality of the New World was one full of sickness, confusion, starvation, and death.

Columbus writes a letter ten years after the first letter and this is the one that is addressed to King Ferdinand. It was from his fourth journey to the Americas and he had become shipwrecked in Jamaica. This letter had a dramatically and quite noticeably different tone and contexts than the first letter possessed. It was very negative and pessimistic, opposed the prior letter that was optimistic and encouraging. It describes the lands in exhausted condition and lots of destruction. Christopher Columbus wrote in a position of desperation and described himself as a broken man and in doing so he is discrediting some of the statements he wrote originally. He also complains some about lack of recognition for his various accomplishments in his letter which counteracts the fact that he was supposedly on his explorations for the betterment Spain and for spreading Christianity. After complaining he back-tracks once again by saying “I did not sail upon this voyage to gain honour or wealth; this is certain, for already all hope of that was dead.” (Letter to Ferdinand) This statement is clearly untrue considering he was just wishing for more credit for the accomplishments and discovery.

In this letter, Columbus asks to be sent back to Europe supposedly for religious reasons to save his soul. It seems more likely to be a convenient attempt to escape the unpleasant times in the Americas that he was currently facing; which is understandable seeing he was shipwrecked and suffering. Eventually his wish is granted, and he is rescued and does get to return back to Spain. Christopher Columbus dies in 1506, relatively quickly after returning back to the country.

This covers the majority of inaccuracies about the Italian explorer Christopher Columbus. While of course Columbus could’ve been more honest there are certainly thought-out reasons for his inconsistencies in his letters and what is taught about the discoverer. Some of his reasons for being so overly optimistic and overexaggerating the wealth of the land is to receive continued funding from Luis de Sant Angel and King Ferdinand. Another goal Columbus had was to become well-known and famous for his accomplishments and success in the Americas. He desired to be viewed positively by his country and the rest of Europe and wrote in his letters in a specific manner in order to make this happen. His goal in his letter to King Ferdinand towards the end was an attempt to seem like a decent Christian by asking to return to make amends to God since he hadn’t been able to worship as he should have been. Columbus had a very important impact because of what he accomplished in his lifetime, but he must be examined closely because of all the untruths and misguided information surrounding the explorer.

Inconsistencies in the Letters of Columbus. (2021, Apr 27). Retrieved from https://papersowl.com/examples/inconsistencies-in-the-letters-of-columbus/

Community in the World