Community in the World 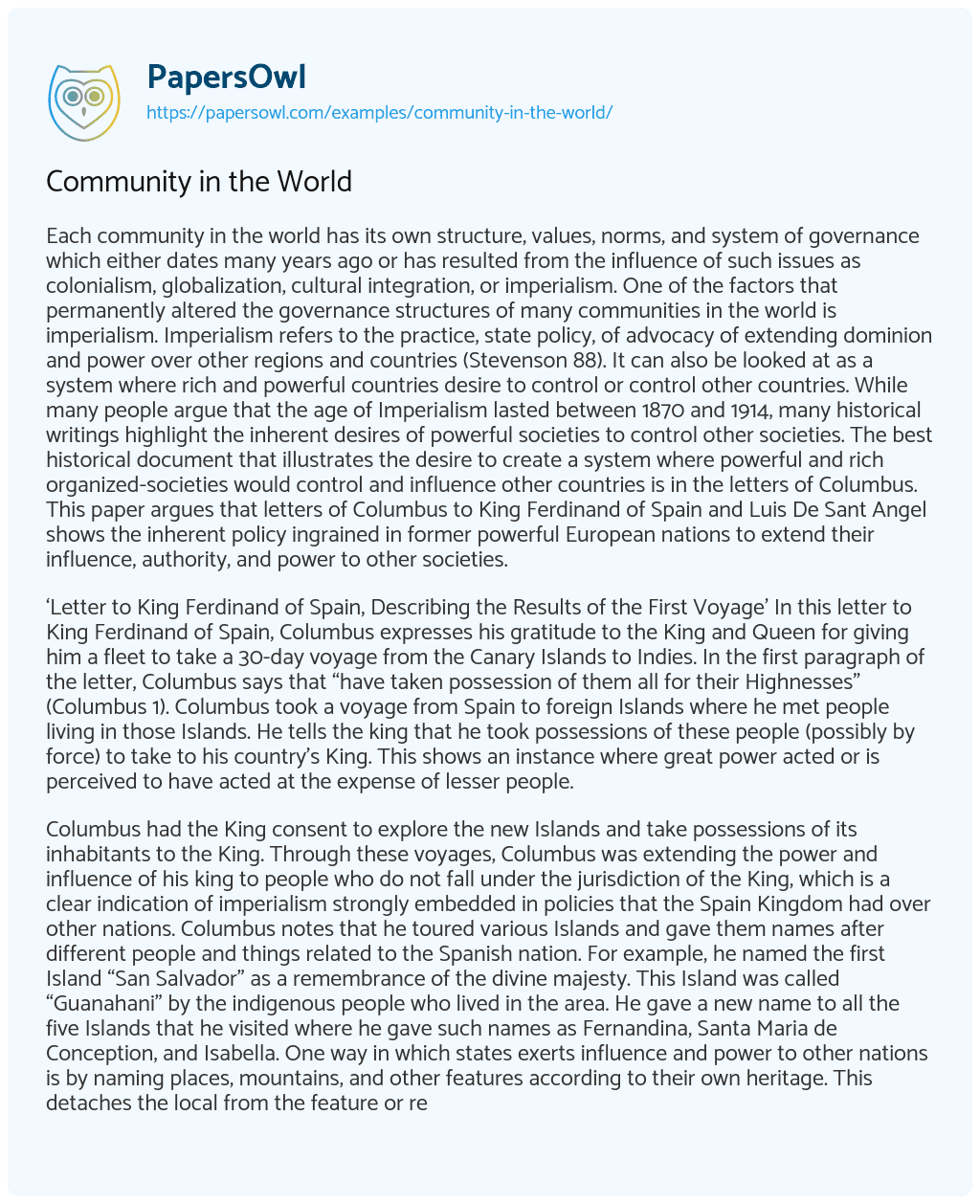 Each community in the world has its own structure, values, norms, and system of governance which either dates many years ago or has resulted from the influence of such issues as colonialism, globalization, cultural integration, or imperialism. One of the factors that permanently altered the governance structures of many communities in the world is imperialism. Imperialism refers to the practice, state policy, of advocacy of extending dominion and power over other regions and countries (Stevenson 88). It can also be looked at as a system where rich and powerful countries desire to control or control other countries. While many people argue that the age of Imperialism lasted between 1870 and 1914, many historical writings highlight the inherent desires of powerful societies to control other societies. The best historical document that illustrates the desire to create a system where powerful and rich organized-societies would control and influence other countries is in the letters of Columbus. This paper argues that letters of Columbus to King Ferdinand of Spain and Luis De Sant Angel shows the inherent policy ingrained in former powerful European nations to extend their influence, authority, and power to other societies.

‘Letter to King Ferdinand of Spain, Describing the Results of the First Voyage’ In this letter to King Ferdinand of Spain, Columbus expresses his gratitude to the King and Queen for giving him a fleet to take a 30-day voyage from the Canary Islands to Indies. In the first paragraph of the letter, Columbus says that “have taken possession of them all for their Highnesses” (Columbus 1). Columbus took a voyage from Spain to foreign Islands where he met people living in those Islands. He tells the king that he took possessions of these people (possibly by force) to take to his country’s King. This shows an instance where great power acted or is perceived to have acted at the expense of lesser people.

Columbus had the King consent to explore the new Islands and take possessions of its inhabitants to the King. Through these voyages, Columbus was extending the power and influence of his king to people who do not fall under the jurisdiction of the King, which is a clear indication of imperialism strongly embedded in policies that the Spain Kingdom had over other nations. Columbus notes that he toured various Islands and gave them names after different people and things related to the Spanish nation. For example, he named the first Island “San Salvador” as a remembrance of the divine majesty. This Island was called “Guanahani” by the indigenous people who lived in the area. He gave a new name to all the five Islands that he visited where he gave such names as Fernandina, Santa Maria de Conception, and Isabella. One way in which states exerts influence and power to other nations is by naming places, mountains, and other features according to their own heritage. This detaches the local from the feature or region.

In this case, by giving the Islands new names (with authority from King Ferdinand of Spain), Columbus illustrates the tendency by the empire he represented (Spain) to regard itself as spreading order, civilization, and occupying high moral ground. The indigenous people were not consulted in remaining of their islands which shows one trait of imperialism of totalitarian where colonized and “lesser people” rarely had any say in the governance of their welfare. Imperialists consider themselves as the epitome of civilization where other people are considered uncivilized, un-organized and who needs to be controlled in order to establish an elaborate governance structure. In this Letter Columbus tells the King that people of Islands that he passed through, go naked, spoke in other languages, had nor weapon, iron or steel, and only use spears. He further argues that these people fancied “things so worthless as fragments of broken crockery, scraps of broken and lace tip” (Columbus 4).

In terms of religion, Columbus describes the people he met as holding no creed, but they were no idolaters, women had no kings or rulers. This shows that Columbus considered these people inferior, uncivilized and he compared their lifestyle and judged it according to the lifestyle he experienced in Spain. Imperialists think they have high moral ground and hold true religion. This is the case for Columbus who thought that true religion must have Christian ideals. Columbus used an aggressive behavior agonist his hosts in Indies. He narrates that he took natives by force in the first Island that he found in Indies. He forced them to learn and give him information about whatever was located in that region. He also took some with him to Spain as indicated by his statement “those I bring with me are still of the opinion that I come from Heaven, for all the intercourse in which they have had with me” (Columbus 5). This shows the imperials ideology of using force to get what they want from other people.

In this case, Columbus had guns and other weapons which were superior to that of the natives and by using these arms he was able to force some people to do whatever he wanted. In overall, the whole voyage of Columbus as expressed in his letter shows communication between two imperialists who consider themselves superior to people from other regions, and who extends their power and influence other people using both “soft” and “hard” power. ‘The Letter of Columbus to Luis De Sant Angel Announcing His Discovery’ In this letter, Columbus states to Luis De Sant Angel that he is extremely pleased with the outcome of his first voyage. This is the same voyage that he describes to King Ferdinand of Spain in the letter above. Columbus tells Luis De Sant Angel that he took possessions from numberless people without opposition by “by proclamation and display of the Royal Standard” (Columbus 8). This shows the imperial policies of Spain of discovering the new world and new territories which acted as groundwork for their latter overs conquest used to encircle the globe together with others such as British, Dutch and French. This letter shows that the Spain Royal Standard was proclaimed and displayed in any region that Columbus visited regardless of the governance structure that inhabitants of that region followed. This is by far, the extension of control and power over other established governance structures. Columbus had not kind words in describing various groups of people he met in his first voyage he argues that in the second isle he met people who were “ferocious people …..Who not worse looking than the others” (Columbus 6).

In this statement, Columbus could be considered to argue that other people were looking worse. He thought there would be feminine and masculine roles in the societies that he met as he was used to, but he noted that women among these people had no feminine roles. This shows that Columbus regarded himself higher than all the people that he met in the Island. Columbus had the audacity to question their behavior because he was well armed and had men to protect him. He took some Indians to testify to the King about the gold that is found in other Islands that he did not manage to visit. He requests the King and Queen to send “as many slaves as they (King and Queen) choose”. The letter illustrates the imperialism that Columbus sought to extend far and beyond Spain. The letter shows that he left other men in some Islands so that they can discover more resources that are found in these islands. This is an indication that the intention of his first voyage was to discover resources that could be used to the benefit of his kingdom by controlling politically and economically people located in places where those resources are found. Forceful extension of a nation’s authority by creating political or economic domination on other people that are not colonies was practiced by European states such as Spain.

The two letters above by Columbus illustrates various forms of imperialism (ranging from the forceful taking of natives to re-naming other regions). The letters show one of the most interesting aspects of imperialism: imperialists tendered to consider themselves as spreading civilization, morality, order, and religion and claimed they occupied high moral ground to judge others. People from Islands that Columbus visited had no much say in what he did at their Island and some were taken as slaves. In overall, the two essays cements the idea that imperialism begun long ago before the commonly considered “age of Imperialism”.

Community in the World. (2021, Jun 26). Retrieved from https://papersowl.com/examples/community-in-the-world/

Transition to a Better Life, a Better World

Imperialism Masked by the Gift of Faith