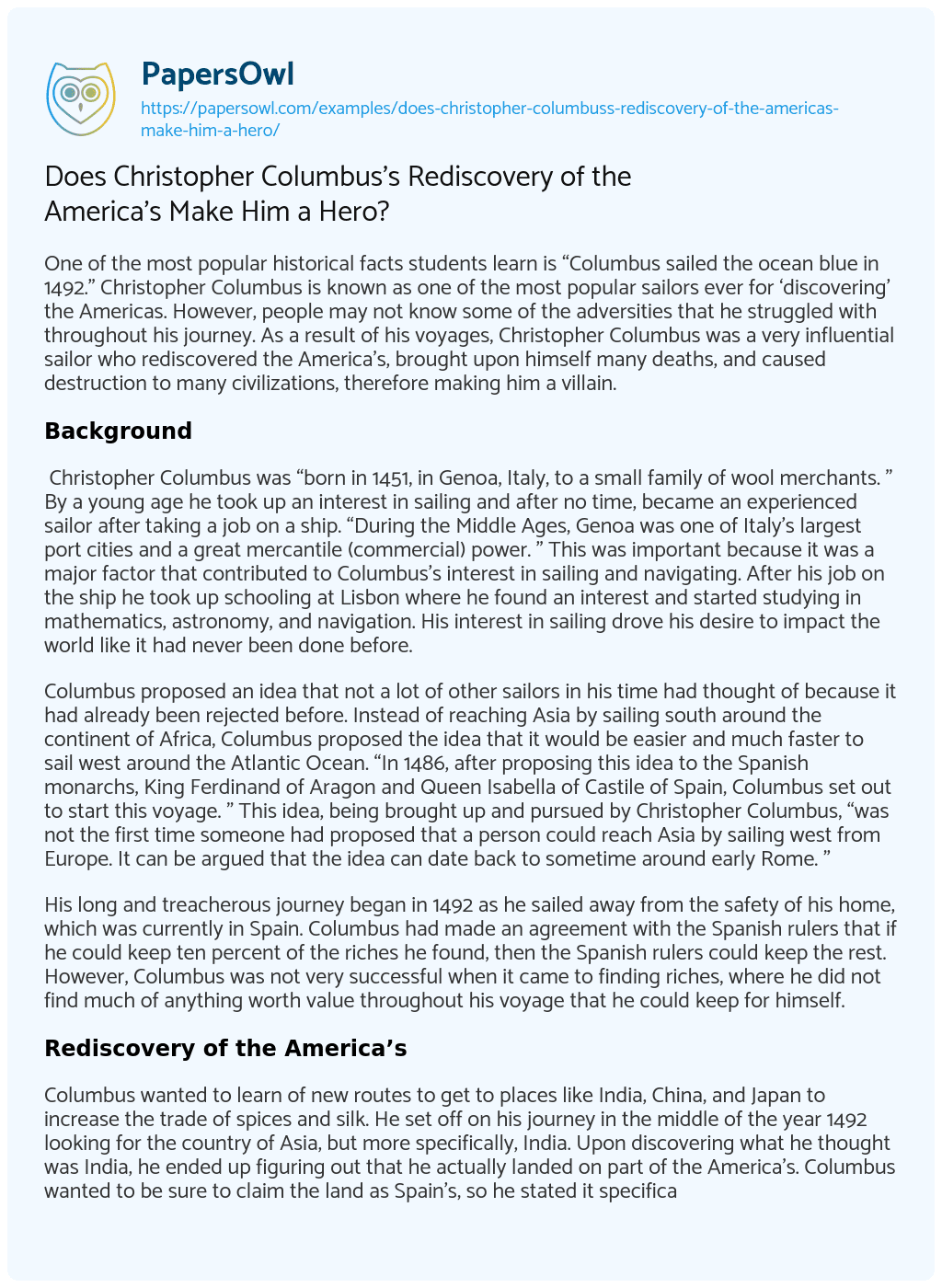 One of the most popular historical facts students learn is “Columbus sailed the ocean blue in 1492.” Christopher Columbus is known as one of the most popular sailors ever for ‘discovering’ the Americas. However, people may not know some of the adversities that he struggled with throughout his journey. As a result of his voyages, Christopher Columbus was a very influential sailor who rediscovered the America’s, brought upon himself many deaths, and caused destruction to many civilizations, therefore making him a villain.

Christopher Columbus was “born in 1451, in Genoa, Italy, to a small family of wool merchants. ” By a young age he took up an interest in sailing and after no time, became an experienced sailor after taking a job on a ship. “During the Middle Ages, Genoa was one of Italy’s largest port cities and a great mercantile (commercial) power. ” This was important because it was a major factor that contributed to Columbus’s interest in sailing and navigating. After his job on the ship he took up schooling at Lisbon where he found an interest and started studying in mathematics, astronomy, and navigation. His interest in sailing drove his desire to impact the world like it had never been done before.

Columbus proposed an idea that not a lot of other sailors in his time had thought of because it had already been rejected before. Instead of reaching Asia by sailing south around the continent of Africa, Columbus proposed the idea that it would be easier and much faster to sail west around the Atlantic Ocean. “In 1486, after proposing this idea to the Spanish monarchs, King Ferdinand of Aragon and Queen Isabella of Castile of Spain, Columbus set out to start this voyage. ” This idea, being brought up and pursued by Christopher Columbus, “was not the first time someone had proposed that a person could reach Asia by sailing west from Europe. It can be argued that the idea can date back to sometime around early Rome. ”

His long and treacherous journey began in 1492 as he sailed away from the safety of his home, which was currently in Spain. Columbus had made an agreement with the Spanish rulers that if he could keep ten percent of the riches he found, then the Spanish rulers could keep the rest. However, Columbus was not very successful when it came to finding riches, where he did not find much of anything worth value throughout his voyage that he could keep for himself.

Rediscovery of the America’s

Columbus wanted to learn of new routes to get to places like India, China, and Japan to increase the trade of spices and silk. He set off on his journey in the middle of the year 1492 looking for the country of Asia, but more specifically, India. Upon discovering what he thought was India, he ended up figuring out that he actually landed on part of the America’s. Columbus wanted to be sure to claim the land as Spain’s, so he stated it specifically in his journal. In his journal, The Journal of the First Voyage of Columbus, it is stated that “The Admiral called to the two captains, and to the others who leaped on shore, and to Rodrigo Escovedo, secretary of the whole fleet, and to Rodrigo Sanchez of Segovia, and said that they should bear faithful testimony that he, in presence of all, had taken, as he now took, possession of the said island for the King and for the Queen his Lords, making the declarations that are require, as is now largely set forth in the testimonies which were then made in writing. ”

Christopher Columbus did not discover the America’s. However, he led one of the first ever European voyages to the America’s. Columbus wanted to claim all of the land to himself and to the country of Spain, which was a very self-centered act. He did not care about the people who were already there, native to their land and had always been living there. Since it was the native people’s land before Columbus’s and the country of Spain, the fact that he wanted to take it away from them is one reason that Columbus could be considered a villain rather than a hero.

Columbus never actually set foot in North America which is something that a lot of people do not know. He went on four different voyages starting with the one in 1492. In this journey, Columbus landed on multiple different islands which are now known today as the Bahamas. On some of his other journeys he explored the coasts of South America and Central America. Although Columbus did not discover North America exactly, he did discover a viable route to the America’s, which then resulted in the colonization of European decent in North America.

Currency between now and back in 1492 are a lot different and they can create large problems and discrepancies when trying to figure out costs between the two time periods. It is very hard to get an exact number of how much Columbus’s voyage would have costed because some of the original records stating the exact amounts have been lost or misplaced. Because of this, historians have had to use other methods of coming up with an exact number, which is very difficult. Instead of coming up with a specific number, they come up with a larger range of how much the voyage could have costed.

David Satava, a historical accountant from the University of Houston, Victoria explained that, “The lack of original accounting records has made it difficult for scholars to agree upon how much the monarchs actually contributed to the first voyage, let alone what the first voyage cost in current historical terms. A number of difficulties arise when trying to convert a five-hundred-year-old currency into today’s dollar. ” One reason that not only Columbus wanted to complete this journey, but that the Spanish monarchs agreed to help fund him was for the fame and fortunes. “

On his fourth and final voyage to the America’s, Columbus summed up his feelings about gold in a letter to Ferdinand and Isabella: ‘Gold is most excellent; gold is treasure, and he who possesses it does all he wishes to it in this world. ’” Columbus wanted to be remembered for a long time and become rich, which eventually happened. Today, there is a day, Columbus Day, that celebrates the ‘discovery’ of the America’s. The Spanish monarchs, Ferdinand of Aragon and Isabella of Castile not only wanted this fame and fortune also, but they saw the opportunity for Catholicism to be spread to different countries. The spread of Christianity and Catholicism was a very important movement during the fourteen and fifteen centuries. Since Columbus was also a Catholic, he also thought that this could contribute to his fame and make him more popular and have a greater impact on Spanish society.

Not only did Christopher Columbus abuse people of their native lands, but he also brought upon them serious illnesses like the smallpox, measles and influenza. “Some historians say the impact of European and African settlers in the New World was more destructive than the Black Death had been in medieval Europe, possibly killing off as much as 90 percent of the native populations. There were an estimated 250,000 indigenous people in Hispaniola in 1492 and by 1517, only 14,000 remained. ” As we can see, Columbus changed the way that the America’s functioned and it was not in a good way. People in these native lands had to deal with these viruses, knowing that there was no cure at the time. So, not only was he taking over their land and calling it Spanish territory, but he was also forcing illnesses onto them, knowing that there was no cure for them at the time.

People might think that Christopher Columbus was simply a ‘Good Samaritan’ that just wanted to seek out and explore the un-explored. However, whether people see it or not, that testimony is not true. The first voyage that Columbus set out on, he landed on the islands of the Bahamas. When he stepped foot onto the islands, he terrorized the native people of the islands, killing most of their population. Columbus did not make it easy for these native people to live on the island, for all he did was bring violence to them. “In March of 1493, Columbus left a group of about forty men on the island of Hispaniola. He did this hoping that they would colonize the island as he traveled back to Spain. ”

About six months later in September 1493, Columbus returned to the island of Hispaniola to see it destroyed. Witnessing this, he wanted to see if there was a way to control them, so “he left his brothers Bartolomeo and Diego with many slaves ” to try and rebuild that island that had previously been destroyed. Not only did Christopher Columbus leave slaves to rebuild the islands, but he also enslaved many other indigenous people.

One way he did this was by sending a large group of slaves to Queen Isabella. She was shocked that he had done this and rejected the slaves considering they were now Spanish subjects. In result of Columbus sending these slaves to Queen Isabella and the violent revolution started against the brothers of Columbus, the rulers of Spain heard this and sent a new governor to the island to bring it back to a peaceful nature. Columbus was then arrested and sent back to Spain. This shows that even though Columbus ‘discovered’ this new land, he terrorized people and started to colonize the America’s which can be seen as harmful and unnecessary to some people.

Throughout history, Christopher Columbus has been seen as a hero by many people for the ‘discovery’ of the America’s. However, Columbus’s voyage can be thought and seen as a controversial topic and he can be seen more as a villain than a hero. Even today in California, Columbus’s statue has been removed and Columbus Day has been renamed as a different holiday, “Indigenous People Day.”

Christopher Columbus was previously seen as an influential navigator who rediscovered the America’s. However, today he can be seen more as a villain because of the deaths he brought upon himself and the civilizations that were destroyed. Ask yourself this, would our world look much different today if Christopher Columbus had acted in a more loving and caring way to the indigenous people of the America’s?

Does Christopher Columbus's Rediscovery of the America's Make Him a Hero?. (2021, May 03). Retrieved from https://papersowl.com/examples/does-christopher-columbuss-rediscovery-of-the-americas-make-him-a-hero/