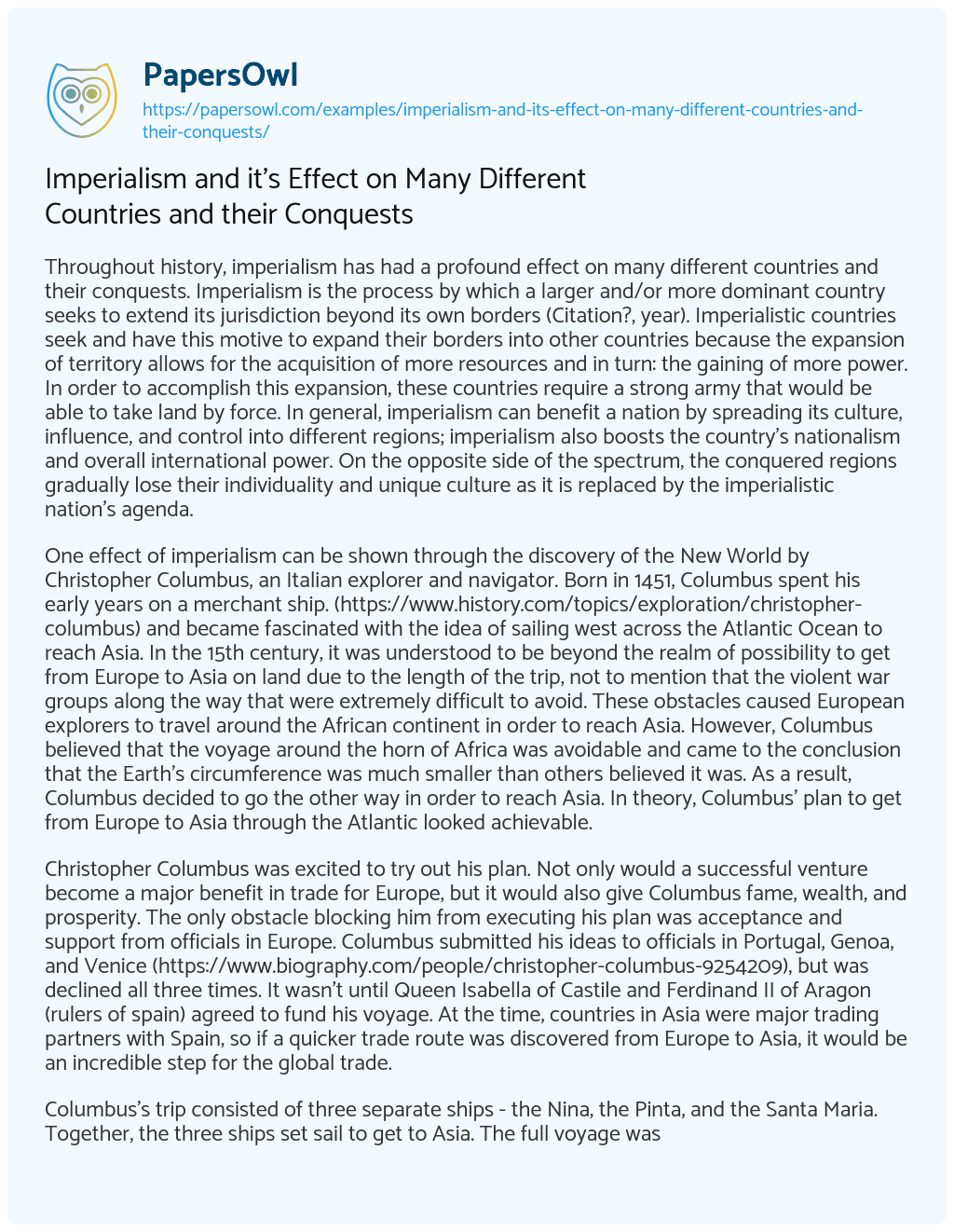 Throughout history, imperialism has had a profound effect on many different countries and their conquests. Imperialism is the process by which a larger and/or more dominant country seeks to extend its jurisdiction beyond its own borders (Citation?, year). Imperialistic countries seek and have this motive to expand their borders into other countries because the expansion of territory allows for the acquisition of more resources and in turn: the gaining of more power. In order to accomplish this expansion, these countries require a strong army that would be able to take land by force. In general, imperialism can benefit a nation by spreading its culture, influence, and control into different regions; imperialism also boosts the country’s nationalism and overall international power. On the opposite side of the spectrum, the conquered regions gradually lose their individuality and unique culture as it is replaced by the imperialistic nation’s agenda.

One effect of imperialism can be shown through the discovery of the New World by Christopher Columbus, an Italian explorer and navigator. Born in 1451, Columbus spent his early years on a merchant ship. (https://www.history.com/topics/exploration/christopher-columbus) and became fascinated with the idea of sailing west across the Atlantic Ocean to reach Asia. In the 15th century, it was understood to be beyond the realm of possibility to get from Europe to Asia on land due to the length of the trip, not to mention that the violent war groups along the way that were extremely difficult to avoid. These obstacles caused European explorers to travel around the African continent in order to reach Asia. However, Columbus believed that the voyage around the horn of Africa was avoidable and came to the conclusion that the Earth’s circumference was much smaller than others believed it was. As a result, Columbus decided to go the other way in order to reach Asia. In theory, Columbus’ plan to get from Europe to Asia through the Atlantic looked achievable.

Christopher Columbus was excited to try out his plan. Not only would a successful venture become a major benefit in trade for Europe, but it would also give Columbus fame, wealth, and prosperity. The only obstacle blocking him from executing his plan was acceptance and support from officials in Europe. Columbus submitted his ideas to officials in Portugal, Genoa, and Venice (https://www.biography.com/people/christopher-columbus-9254209), but was declined all three times. It wasn’t until Queen Isabella of Castile and Ferdinand II of Aragon (rulers of spain) agreed to fund his voyage. At the time, countries in Asia were major trading partners with Spain, so if a quicker trade route was discovered from Europe to Asia, it would be an incredible step for the global trade.

Columbus’s trip consisted of three separate ships – the Nina, the Pinta, and the Santa Maria. Together, the three ships set sail to get to Asia. The full voyage was extremely brutal, people on the ships got sick, and some even died. There was not enough food and water on the ships to survive the full voyage, and what was eaten was not ideal- consisting of mainly bread and (look up). Finally, after (3) days out on water, Christopher Columbus and his group of survivors reached shore. Ecstatic, Columbus was convinced that he had found Asia , and was ready to gather new resources, most definitely thinking about the amount of fame he would soon possess once all of Europe knew of his accomplishments. Little did he know that the land that he had reached was not Asia at all, but a New World that blocked the way to Asia, currently known as the Americas. Columbus soon found out that him and his crew were not the first discoverers of this new land. However, utilizing imperialism, other settlers would not stand in his way.

After Columbus had set foot on America, he was greeted by very foreign people that had established civilization on this new continent. Now known as Native Americans, Columbus forced them to work under his terms in order to colonize New World. This action is an example of imperialism as Columbus used his power and men to forcefully take control over the natives who were there before him. The motives for the colonization of the new world fall into three famous categories: “God, Gold, and Glory.” “God” stands for the desire to expand and spread Christianity outside of Europe’s borders. “Glory” stands for gaining a larger power and empire. Finally, “Gold” stands for the acquirement of gold, silver, and other precious stones for a general gaining of wealth. These three motives for colonization would help boost nationalism and the overall power of Spain and also prove to be one of the key parts of imperialism.

More specifically, Columbus imperialized the New World by bringing the Christian religion to the native people. Not long after the first Europeans settled into the New World, a Christian priest also arrived who taught and spread the religion used in Spain, which was Christianity. This religious influence and teaching was just one step for Spain in spreading their nationalism and culture. Spain also planned to get lots of money and power from the New World by utilizing trade and other newfound resources. As a result of Columbus’ journey, Spain had taken an imperialistic step in becoming a larger worldly power.

The effects of imperialism continued in the country of India in the 19th century. Due to is surplus of spices, jewels, and various other precious resources, India had been sought after for trade by many European countries. Out of all the European countries, Great Britain arose as the most powerful one as they had just signed the Pax Britannica agreement- an agreement practically accepting Great Britain as the main power in the world. Following this agreement, Great Britain began to exchange resources with India mainly through the British East India company. This international trade was an imperialistic step for Britain, and allowed them to economically benefit at the expense of another nation.

The East India Company was an British organization shaped for exchange with Asia and India. Beginning on December 31, 1600, it was begun as an exchanging group which goal was to import spices which were prominent resources in India. It additionally exchanged cotton, silk, indigo, saltpeter, and tea, The British East India company was also known to transport slaves to different lands. From the early 18th century to the mid-19th century, it began participating in British legislature and acted as a crucial factor of British imperialism in India . From the late eighteenth century it progressively lost both business and political control. In 1873 it stopped to exist as a company.

The issues between Great Britain and India are a continuity of the effects of imperialism. Similar to Christopher Columbus’s annexation of the New World, Great Britain used its greater power and trade with India to take over the nation. Another way the issue of imperialism continued throughout history was the through the Soviet Expansion into Europe. During World War 2, countries joined together to form alliances based on past economic partnerships. The Soviet Union lost around 20 million people.

Imperialism and it's Effect on Many Different Countries and their Conquests. (2021, Mar 27). Retrieved from https://papersowl.com/examples/imperialism-and-its-effect-on-many-different-countries-and-their-conquests/