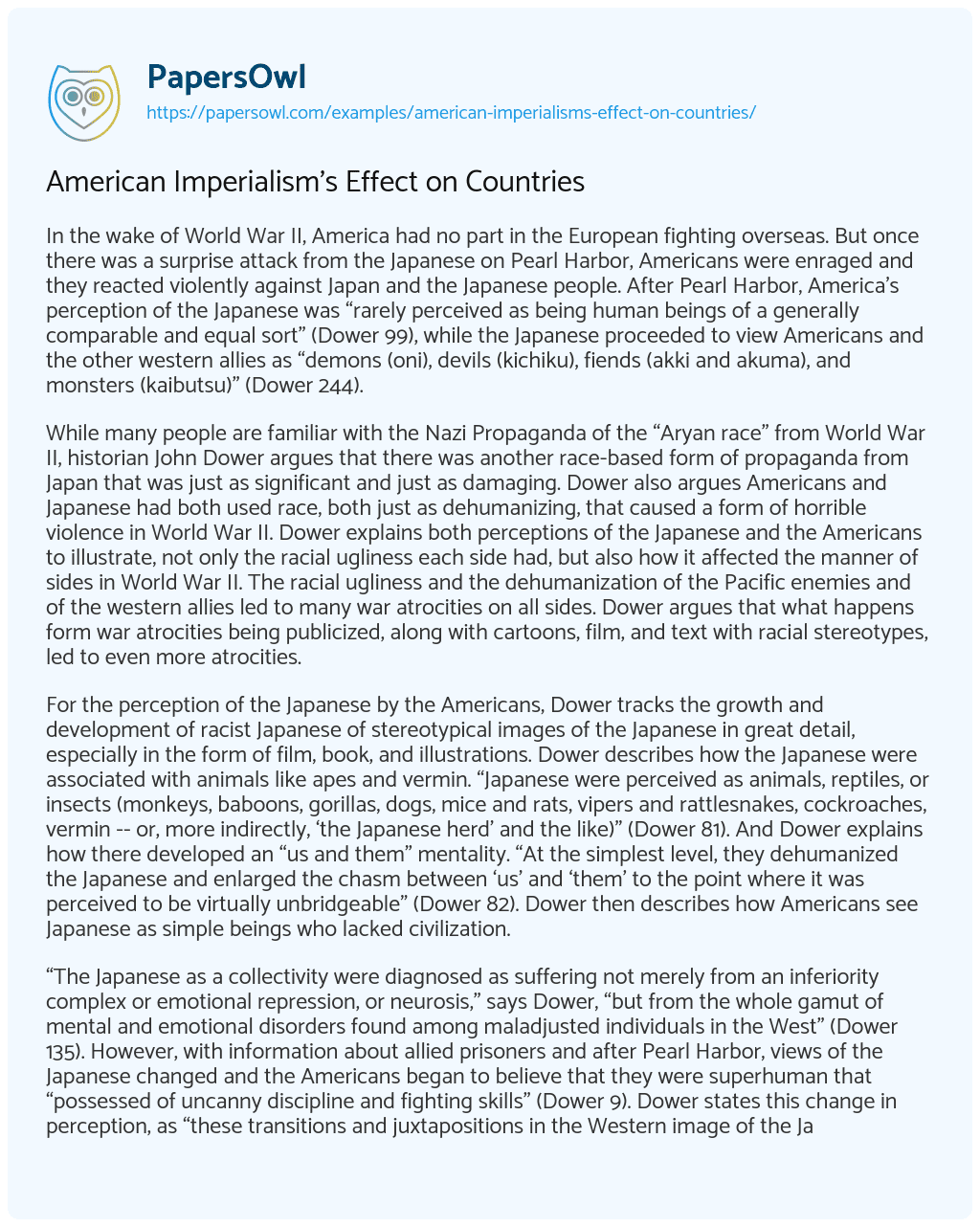 In the wake of World War II, America had no part in the European fighting overseas. But once there was a surprise attack from the Japanese on Pearl Harbor, Americans were enraged and they reacted violently against Japan and the Japanese people. After Pearl Harbor, America’s perception of the Japanese was “rarely perceived as being human beings of a generally comparable and equal sort” (Dower 99), while the Japanese proceeded to view Americans and the other western allies as “demons (oni), devils (kichiku), fiends (akki and akuma), and monsters (kaibutsu)” (Dower 244).

While many people are familiar with the Nazi Propaganda of the “Aryan race” from World War II, historian John Dower argues that there was another race-based form of propaganda from Japan that was just as significant and just as damaging. Dower also argues Americans and Japanese had both used race, both just as dehumanizing, that caused a form of horrible violence in World War II. Dower explains both perceptions of the Japanese and the Americans to illustrate, not only the racial ugliness each side had, but also how it affected the manner of sides in World War II. The racial ugliness and the dehumanization of the Pacific enemies and of the western allies led to many war atrocities on all sides. Dower argues that what happens form war atrocities being publicized, along with cartoons, film, and text with racial stereotypes, led to even more atrocities.

For the perception of the Japanese by the Americans, Dower tracks the growth and development of racist Japanese of stereotypical images of the Japanese in great detail, especially in the form of film, book, and illustrations. Dower describes how the Japanese were associated with animals like apes and vermin. “Japanese were perceived as animals, reptiles, or insects (monkeys, baboons, gorillas, dogs, mice and rats, vipers and rattlesnakes, cockroaches, vermin — or, more indirectly, ‘the Japanese herd’ and the like)” (Dower 81). And Dower explains how there developed an “us and them” mentality. “At the simplest level, they dehumanized the Japanese and enlarged the chasm between ‘us’ and ‘them’ to the point where it was perceived to be virtually unbridgeable” (Dower 82). Dower then describes how Americans see Japanese as simple beings who lacked civilization.

“The Japanese as a collectivity were diagnosed as suffering not merely from an inferiority complex or emotional repression, or neurosis,” says Dower, “but from the whole gamut of mental and emotional disorders found among maladjusted individuals in the West” (Dower 135). However, with information about allied prisoners and after Pearl Harbor, views of the Japanese changed and the Americans began to believe that they were superhuman that “possessed of uncanny discipline and fighting skills” (Dower 9). Dower states this change in perception, as “these transitions and juxtapositions in the Western image of the Japanese were abrupt and jarring: from subhuman to superhuman, lesser men to supermen” (Dower 99). Even though the Americans did have their views of the German Nazis as “cruder epithets for the Germans (heinies, Huns, Jerrys, Krauts)” (Dower 81). It’s more obvious to see how the Japanese were treated differently than other enemies because America’s perception of them was more race-based than anything by aligning them with “simple” animals and having racial slurs for them like “Jap” and “Nip” (Dower 81). Dower can argue that because of the treatment of the Japanese as more than just enemies, but as a “formidable foe who deserved no mercy and virtually demanded to be extermination” (Downer 9), which it led to many war atrocities.

Meanwhile, similar to the Germans, the Japanese had their own idea of the perfect, superior race. Dower describes the views the Japanese had “referred to themselves as the leading race (shido minzoku) of the world.” And just like the Americans, “they called on a variety of metaphors, images, code phrases, and concepts to affirm their superiority – ranging from expressions that demeaned non-Japanese to elaborate affirmations of their own unique qualities” (Dower 203). But what was different from the racism in the West, which “was markedly characterized by denigration of others,” Dower describes how “the Japanese were preoccupied far more exclusively with elevating themselves…they spent more time wrestling with the question of what it really meant to be ‘Japanese,’ how the ‘Yamato race’ was unique among the races and cultures of the world, and why this uniqueness made them superior” (Dower 204 – 205).

And then, Dower explains how that the Japanese “pure race” idea had “carried both ancient religious connotations and complex contemporary ramifications” (Dower 205). So then the Japanese associate Americans other western allies as “demons (oni), devils (kichiku), fiends (akki and akuma), and monsters (kaibutsu)” (Dower 244). Dower can show how this transitions into Japan’s violent side in the war where “death assumed connotations of purity and transcendence, and the ablution that purified could be the bath of blood itself” (Dower 231) so “presenting mass deaths in combat as an act of collective purification” (Dower 231). But, Dower states that besides their differences, “the end results of racial thinking on both sides were virtually identical — being hierarchy, arrogance, viciousness, atrocity, and death” (Dower 180) Examples of this brutality were the “Japanese skulls as ornaments on U.S. military vehicles” (Dower 65) or the collection of “ears, teeth, and skulls” (Dower 71).

Overall, I appreciate books that tell a different side of the story. I’ve heard about the “Aryan race” before and I’ve heard it before in other forms of media. But, I have never heard as much details about the conflict between Japan and the United States other than Pearl Harbor and the atomic bomb drop on Hiroshima and Nagasaki. I also admire the dedication the author had to explaining the race war of World War II, in how “over the years, many individuals offered references, suggestions, critical comments and assistance” (Dower xi), meaning he’s had many inputs from outside voices to tell the story accurately as well as gather many kinds of references to 1940’s media that’s referenced throughout the book. With this I’d feel inclined to find the book undoubtedly a great informative book to describe more of World War II.

Comparatively, in Stephen Kinzer novel, True Flag, he explains American imperialism’s effect on countries like Cuba, the Philippines, and Hawaii. And discusses the question at the time, whether or not to impose or interfere with their territories divided the nation between imperialists and anti-imperialists. Overall, he argues that overseas expansion was potentially predatorily and unlike America’s foundation. His argument shares the idea that Dower had about American brutality in the Pacific, where “atrocious behavior occurred on all sides in the Pacific War” (Dower 12) including America, as well as other Allies. And the violence that occurred in the Philippines where “more Filipinos have been killed by the guns of our [America’s] army and navy than were patriots killed in any six battles of the Revolutionary War” (Kinzer 129) can be similar to the “atrocious behavior” Americans had against the Japanese.