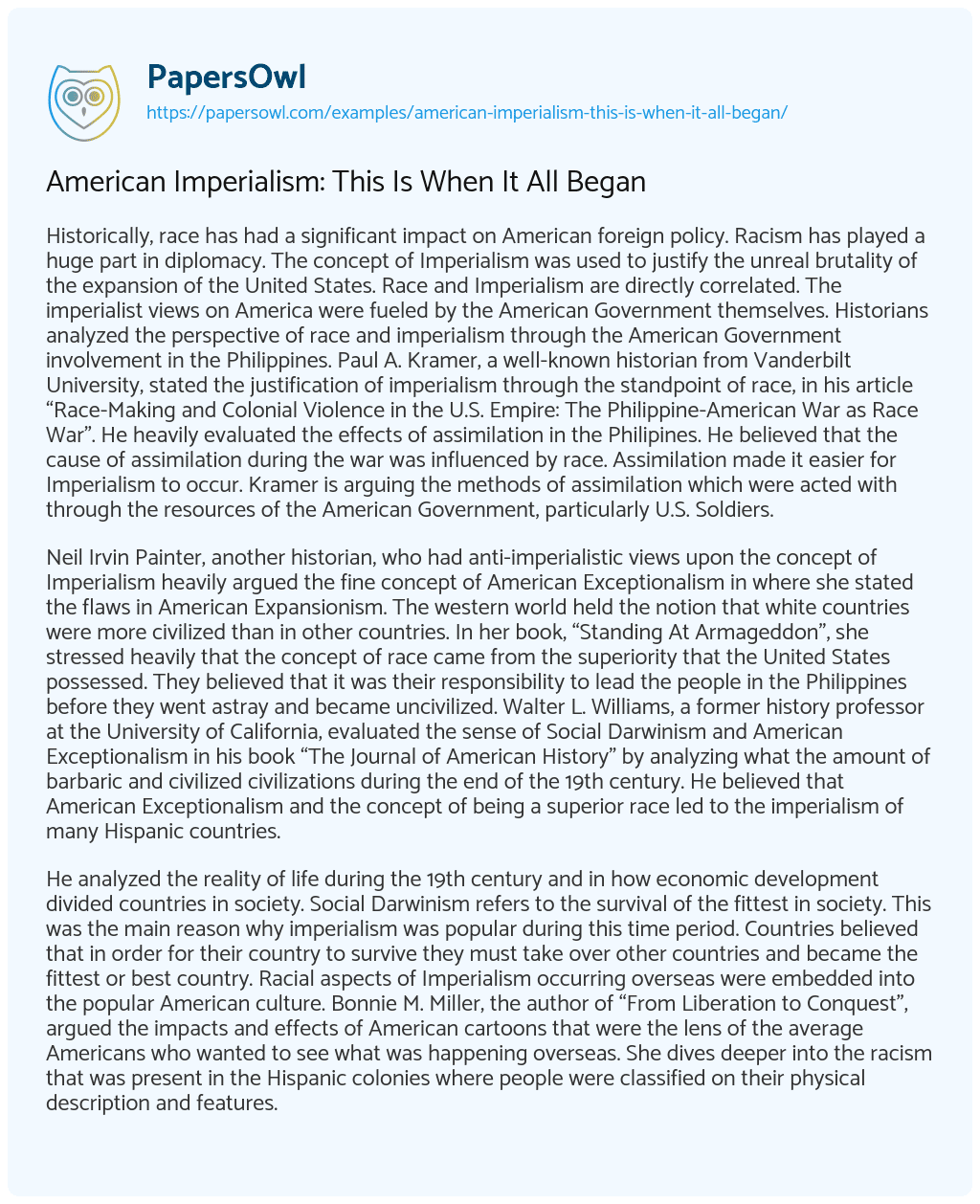 Historically, race has had a significant impact on American foreign policy. Racism has played a huge part in diplomacy. The concept of Imperialism was used to justify the unreal brutality of the expansion of the United States. Race and Imperialism are directly correlated. The imperialist views on America were fueled by the American Government themselves. Historians analyzed the perspective of race and imperialism through the American Government involvement in the Philippines. Paul A. Kramer, a well-known historian from Vanderbilt University, stated the justification of imperialism through the standpoint of race, in his article “Race-Making and Colonial Violence in the U.S. Empire: The Philippine-American War as Race War”. He heavily evaluated the effects of assimilation in the Philipines. He believed that the cause of assimilation during the war was influenced by race. Assimilation made it easier for Imperialism to occur. Kramer is arguing the methods of assimilation which were acted with through the resources of the American Government, particularly U.S. Soldiers.

Neil Irvin Painter, another historian, who had anti-imperialistic views upon the concept of Imperialism heavily argued the fine concept of American Exceptionalism in where she stated the flaws in American Expansionism. The western world held the notion that white countries were more civilized than in other countries. In her book, “Standing At Armageddon”, she stressed heavily that the concept of race came from the superiority that the United States possessed. They believed that it was their responsibility to lead the people in the Philippines before they went astray and became uncivilized. Walter L. Williams, a former history professor at the University of California, evaluated the sense of Social Darwinism and American Exceptionalism in his book “The Journal of American History” by analyzing what the amount of barbaric and civilized civilizations during the end of the 19th century. He believed that American Exceptionalism and the concept of being a superior race led to the imperialism of many Hispanic countries.

He analyzed the reality of life during the 19th century and in how economic development divided countries in society. Social Darwinism refers to the survival of the fittest in society. This was the main reason why imperialism was popular during this time period. Countries believed that in order for their country to survive they must take over other countries and became the fittest or best country. Racial aspects of Imperialism occurring overseas were embedded into the popular American culture. Bonnie M. Miller, the author of “From Liberation to Conquest”, argued the impacts and effects of American cartoons that were the lens of the average Americans who wanted to see what was happening overseas. She dives deeper into the racism that was present in the Hispanic colonies where people were classified on their physical description and features.

The racism that was occurring in America was setting a role for American Imperialism. Using the main ideas of these credited historians, you can come to infer that race was the building block of imperialism and without it, the ideology of imperialism wouldn’t be present. Therefore, Race played a key role in American Imperialism throughout the Philippines and the Spanish-American War because it allowed the United States to use the concept of Social Darwinism to justify imperialism, supported the need to “civilize” the indigenous people, and these were based on applying their views of African Americans and Native Americans to the Filipinos. Social Darwinism came from the concept of evolution. It stated that the strongest in society both economic and spiritually were more likely to succeed. The American Government was founded on this concept. Social Darwinism was used to rationalize the use of imperialism because of America’s die-hard hunger for land. The government felt that it was their self-proclaimed right to the land because they were at the top of the class system.

American Imperialism: This Is When It All Began. (2021, Jul 05). Retrieved from https://papersowl.com/examples/american-imperialism-this-is-when-it-all-began/