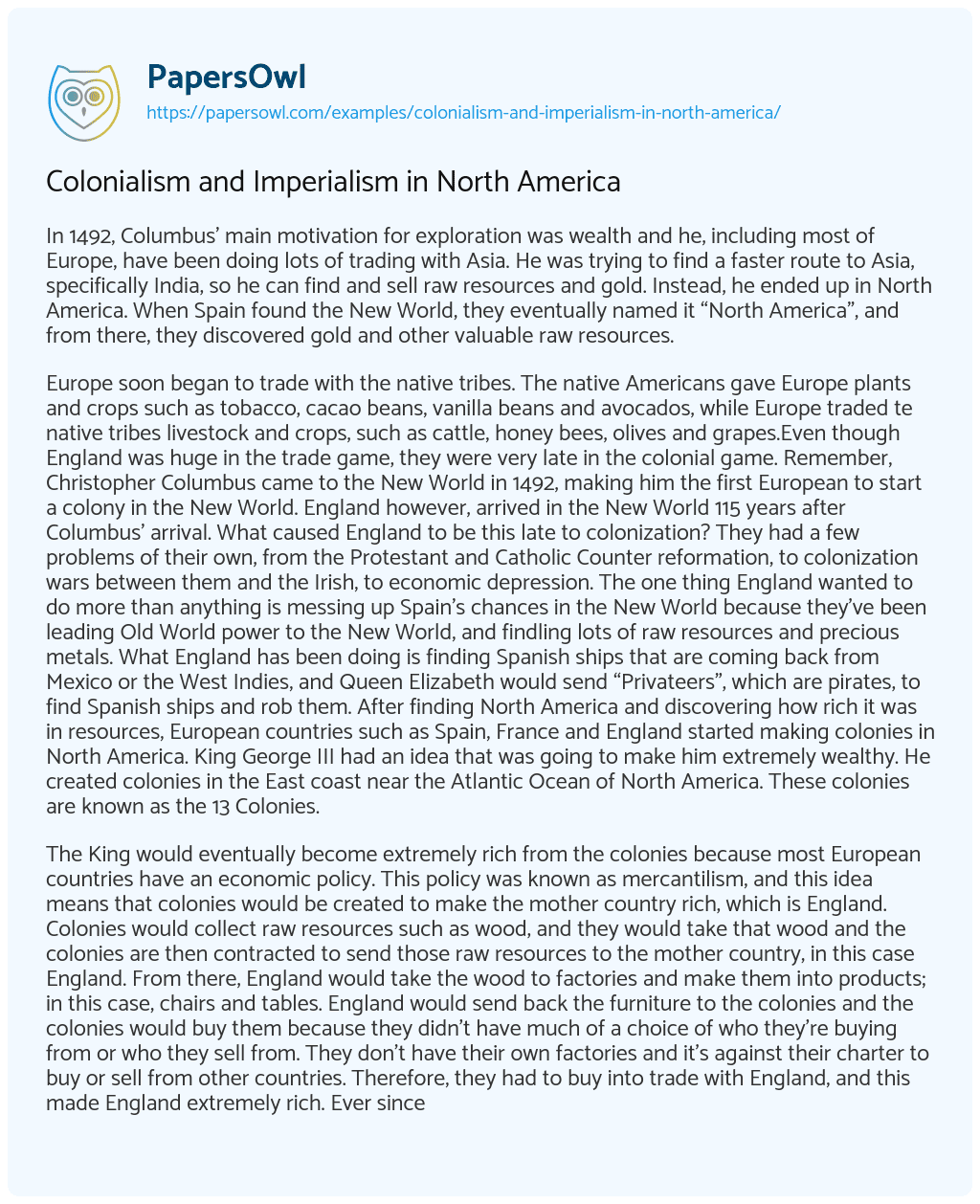 In 1492, Columbus’ main motivation for exploration was wealth and he, including most of Europe, have been doing lots of trading with Asia. He was trying to find a faster route to Asia, specifically India, so he can find and sell raw resources and gold. Instead, he ended up in North America. When Spain found the New World, they eventually named it “North America”, and from there, they discovered gold and other valuable raw resources.

Europe soon began to trade with the native tribes. The native Americans gave Europe plants and crops such as tobacco, cacao beans, vanilla beans and avocados, while Europe traded te native tribes livestock and crops, such as cattle, honey bees, olives and grapes.Even though England was huge in the trade game, they were very late in the colonial game. Remember, Christopher Columbus came to the New World in 1492, making him the first European to start a colony in the New World. England however, arrived in the New World 115 years after Columbus’ arrival. What caused England to be this late to colonization? They had a few problems of their own, from the Protestant and Catholic Counter reformation, to colonization wars between them and the Irish, to economic depression. The one thing England wanted to do more than anything is messing up Spain’s chances in the New World because they’ve been leading Old World power to the New World, and findling lots of raw resources and precious metals. What England has been doing is finding Spanish ships that are coming back from Mexico or the West Indies, and Queen Elizabeth would send “Privateers”, which are pirates, to find Spanish ships and rob them. After finding North America and discovering how rich it was in resources, European countries such as Spain, France and England started making colonies in North America. King George III had an idea that was going to make him extremely wealthy. He created colonies in the East coast near the Atlantic Ocean of North America. These colonies are known as the 13 Colonies.

The King would eventually become extremely rich from the colonies because most European countries have an economic policy. This policy was known as mercantilism, and this idea means that colonies would be created to make the mother country rich, which is England. Colonies would collect raw resources such as wood, and they would take that wood and the colonies are then contracted to send those raw resources to the mother country, in this case England. From there, England would take the wood to factories and make them into products; in this case, chairs and tables. England would send back the furniture to the colonies and the colonies would buy them because they didn’t have much of a choice of who they’re buying from or who they sell from. They don’t have their own factories and it’s against their charter to buy or sell from other countries. Therefore, they had to buy into trade with England, and this made England extremely rich. Ever since Spain discovered North America, their trading system with the Native Americans and the amount of riches they’ve been coming back with, European countries such as France and England strived to make colonies in the New World. For hundreds of years, France, Spain and England saw colonization as a money grabber.

The European colonies saw colonization as a opportunity for more land and more power for their country, and thousands of the older inhabitants had lost their home or even their lives. The greed was so strong that the English and the Spanish were in competition on who gets the most riches. This just goes to show that North America was not created by peace, but with war and greed.

Colonialism and Imperialism in North America. (2021, Jun 07). Retrieved from https://papersowl.com/examples/colonialism-and-imperialism-in-north-america/