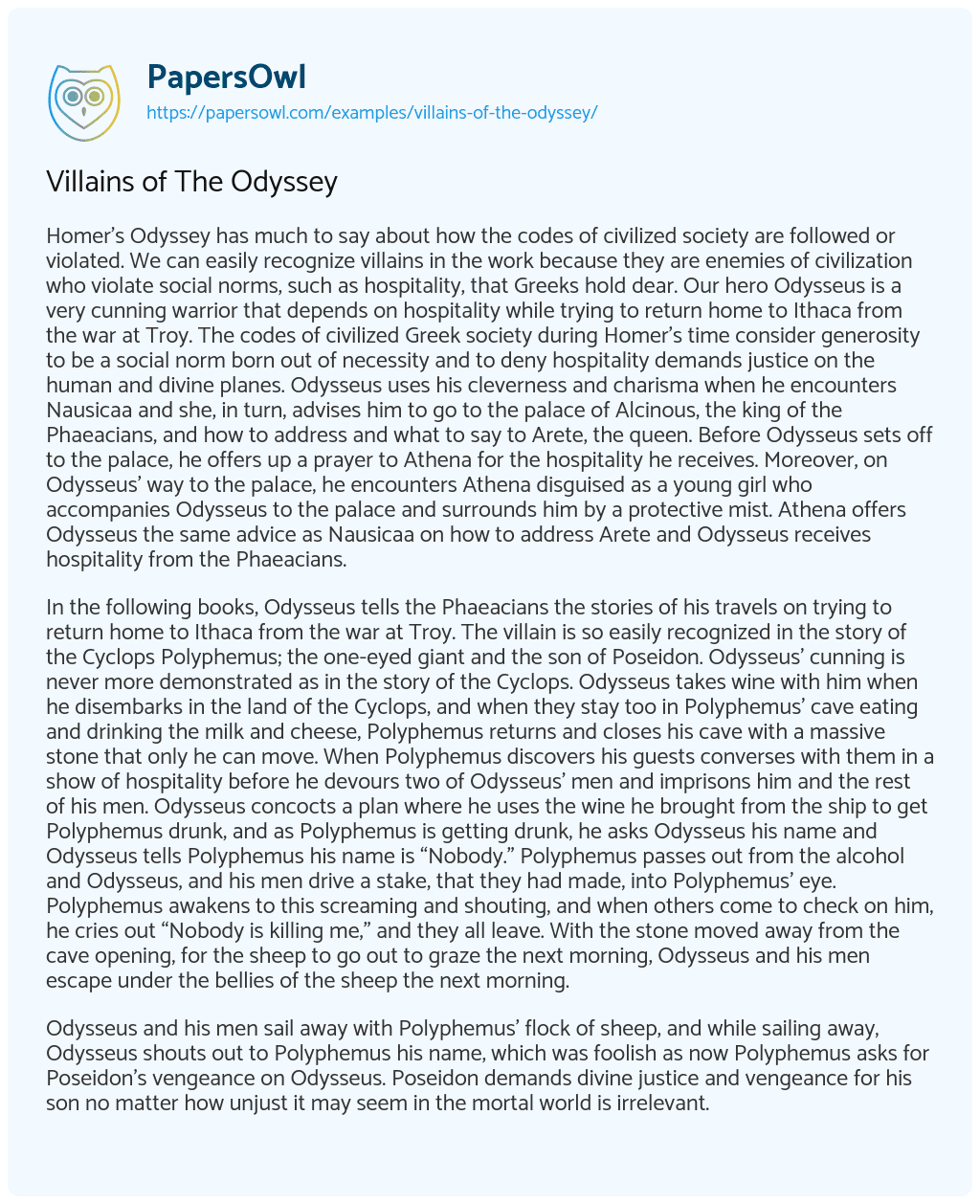 Homer’s Odyssey has much to say about how the codes of civilized society are followed or violated. We can easily recognize villains in the work because they are enemies of civilization who violate social norms, such as hospitality, that Greeks hold dear. Our hero Odysseus is a very cunning warrior that depends on hospitality while trying to return home to Ithaca from the war at Troy. The codes of civilized Greek society during Homer’s time consider generosity to be a social norm born out of necessity and to deny hospitality demands justice on the human and divine planes. Odysseus uses his cleverness and charisma when he encounters Nausicaa and she, in turn, advises him to go to the palace of Alcinous, the king of the Phaeacians, and how to address and what to say to Arete, the queen. Before Odysseus sets off to the palace, he offers up a prayer to Athena for the hospitality he receives. Moreover, on Odysseus’ way to the palace, he encounters Athena disguised as a young girl who accompanies Odysseus to the palace and surrounds him by a protective mist. Athena offers Odysseus the same advice as Nausicaa on how to address Arete and Odysseus receives hospitality from the Phaeacians.

In the following books, Odysseus tells the Phaeacians the stories of his travels on trying to return home to Ithaca from the war at Troy. The villain is so easily recognized in the story of the Cyclops Polyphemus; the one-eyed giant and the son of Poseidon. Odysseus’ cunning is never more demonstrated as in the story of the Cyclops. Odysseus takes wine with him when he disembarks in the land of the Cyclops, and when they stay too in Polyphemus’ cave eating and drinking the milk and cheese, Polyphemus returns and closes his cave with a massive stone that only he can move. When Polyphemus discovers his guests converses with them in a show of hospitality before he devours two of Odysseus’ men and imprisons him and the rest of his men. Odysseus concocts a plan where he uses the wine he brought from the ship to get Polyphemus drunk, and as Polyphemus is getting drunk, he asks Odysseus his name and Odysseus tells Polyphemus his name is “Nobody.” Polyphemus passes out from the alcohol and Odysseus, and his men drive a stake, that they had made, into Polyphemus’ eye. Polyphemus awakens to this screaming and shouting, and when others come to check on him, he cries out “Nobody is killing me,” and they all leave. With the stone moved away from the cave opening, for the sheep to go out to graze the next morning, Odysseus and his men escape under the bellies of the sheep the next morning.

Odysseus and his men sail away with Polyphemus’ flock of sheep, and while sailing away, Odysseus shouts out to Polyphemus his name, which was foolish as now Polyphemus asks for Poseidon’s vengeance on Odysseus. Poseidon demands divine justice and vengeance for his son no matter how unjust it may seem in the mortal world is irrelevant.

Villains of The Odyssey. (2021, Jul 05). Retrieved from https://papersowl.com/examples/villains-of-the-odyssey/

Themes of the Odyssey

The Characters of the Odyssey

Themes, Characteristics, and Archetypes in the Odyssey