Themes, Characteristics, and Archetypes in the Odyssey 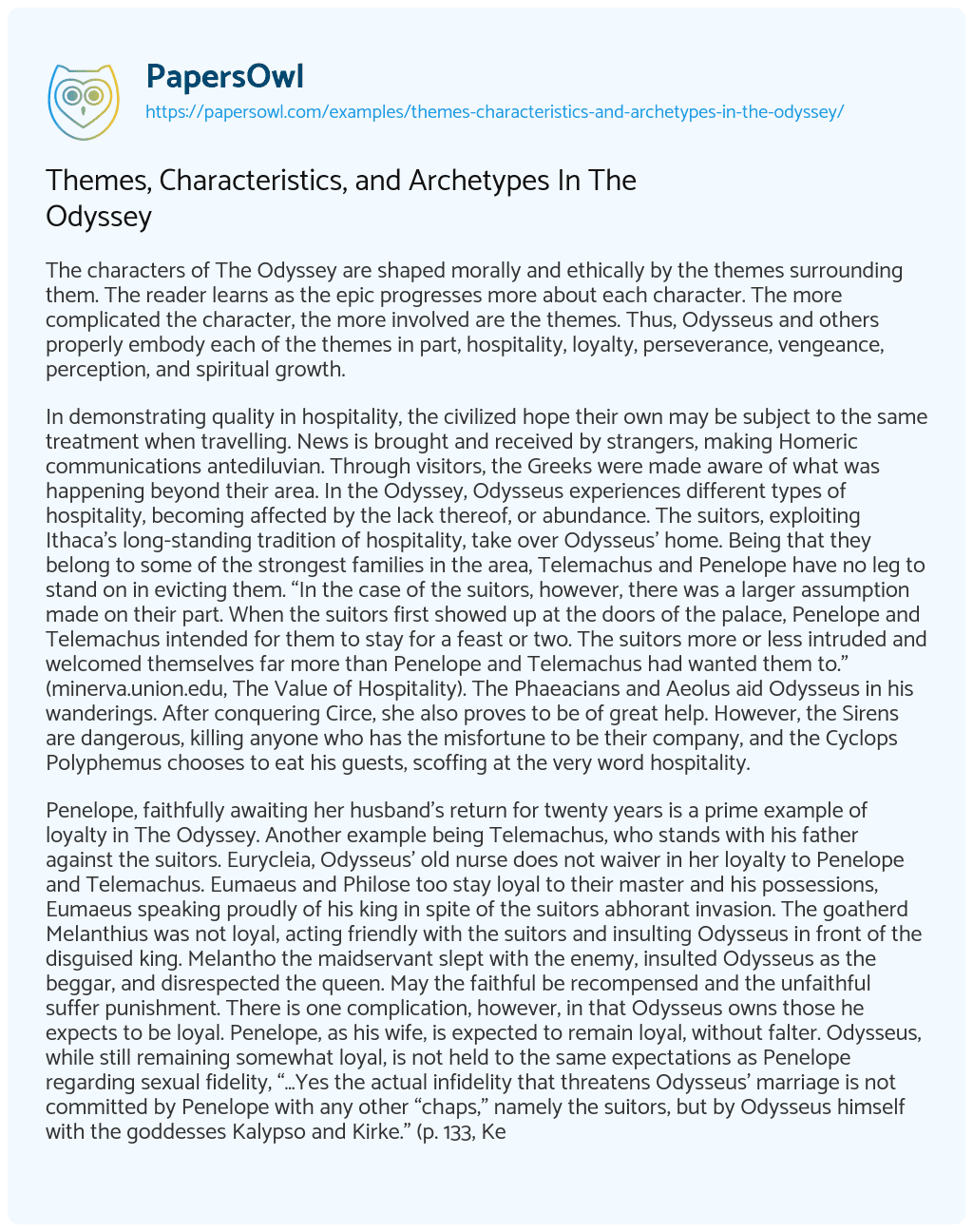 The characters of The Odyssey are shaped morally and ethically by the themes surrounding them. The reader learns as the epic progresses more about each character. The more complicated the character, the more involved are the themes. Thus, Odysseus and others properly embody each of the themes in part, hospitality, loyalty, perseverance, vengeance, perception, and spiritual growth.

In demonstrating quality in hospitality, the civilized hope their own may be subject to the same treatment when travelling. News is brought and received by strangers, making Homeric communications antediluvian. Through visitors, the Greeks were made aware of what was happening beyond their area. In the Odyssey, Odysseus experiences different types of hospitality, becoming affected by the lack thereof, or abundance. The suitors, exploiting Ithaca’s long-standing tradition of hospitality, take over Odysseus’ home. Being that they belong to some of the strongest families in the area, Telemachus and Penelope have no leg to stand on in evicting them. “In the case of the suitors, however, there was a larger assumption made on their part. When the suitors first showed up at the doors of the palace, Penelope and Telemachus intended for them to stay for a feast or two. The suitors more or less intruded and welcomed themselves far more than Penelope and Telemachus had wanted them to.” (minerva.union.edu, The Value of Hospitality). The Phaeacians and Aeolus aid Odysseus in his wanderings. After conquering Circe, she also proves to be of great help. However, the Sirens are dangerous, killing anyone who has the misfortune to be their company, and the Cyclops Polyphemus chooses to eat his guests, scoffing at the very word hospitality.

Penelope, faithfully awaiting her husband’s return for twenty years is a prime example of loyalty in The Odyssey. Another example being Telemachus, who stands with his father against the suitors. Eurycleia, Odysseus’ old nurse does not waiver in her loyalty to Penelope and Telemachus. Eumaeus and Philose too stay loyal to their master and his possessions, Eumaeus speaking proudly of his king in spite of the suitors abhorant invasion. The goatherd Melanthius was not loyal, acting friendly with the suitors and insulting Odysseus in front of the disguised king. Melantho the maidservant slept with the enemy, insulted Odysseus as the beggar, and disrespected the queen. May the faithful be recompensed and the unfaithful suffer punishment. There is one complication, however, in that Odysseus owns those he expects to be loyal. Penelope, as his wife, is expected to remain loyal, without falter. Odysseus, while still remaining somewhat loyal, is not held to the same expectations as Penelope regarding sexual fidelity, “…Yes the actual infidelity that threatens Odysseus’ marriage is not committed by Penelope with any other “chaps,” namely the suitors, but by Odysseus himself with the goddesses Kalypso and Kirke.” (p. 133, Keri Elisabeth Ames, The Oxymoron of Fidelity in Homer’s Odyssey and Joyce’s Ulysses).

Ten years Odysseus was gone in the Trojan War, and ten more on his journey home; absent twenty years from his home in Ithaca. For four years Penelope opposed the suitors’ advances, as according to Antinous, the most aggressive of the suitors. Perseverance is shown in Penelope’s advocacy to remain a faithful wife. The hardest test of perseverance as well as loyalty is the seven years Odysseus spent captive to the goddess-nymph, Calypso. Though he technically failed, even when tempted with immortality Odysseus could not think of anything but home.

In blinding Polyphemus, Odysseus enrages Poseidon, resulting in the god of the sea to seek vengeance for his son. Unable to kill Odysseus, Poseidon fulfills Polyphemus’ desure that Odysseus arrive home late, broken, and alone, his shipmates lost, and his household in turmoil. For helping Odysseus home, the Phaeacians endure Poseidon’s frustrations, their only offense by their tradition of good hospitality. “While by some reckonings Poseidon’s wrath may be excessive, it is hardly without motive. Zeus, in his opening council with Athena, connects Poseidon’s animosity directly with Odysseus’ blinding of Polyphemus, stating that Poseidon “is angry because of the Cyclops, whose eye [Odysseus] blinded””. (p. 58, chs.harvard.edu, Victims of the Gods’ Vengeance). Odysseus endures derision and aggression from Antinous, Melanthius the goatherd, and the maidservant Melantho. He reclaims his vengeance by slaughtering the suitors, the goatherd and maidservant being left to die a slow death.

Athena, being the maven of transformation, is most memorable through her disguises for herself, and Odysseus. Appearing as king of the Taphians and Odysseus’ old friend Mentes, Athena encourages the prince, Telemachus, to canvass the problems in the Palace. As Telemachus’ mentor and guide for the coming of age, Athena protects the prince from the spiteful suitors. As Odysseus prepares for a banquet, thrown in his honor by the Phaeacians, Athena alters his appearance, making him seem even more impressive. When he returns to Ithaca, Athena disguises Odysseus as an old beggar. Odysseus posed previously as a beggar to enter the city of Troy during the Trojan War. In recognition with his family in Ithaca provide significant and controversial twists to the theme of perception. When appearing as a beggar to his son Telemachus, Athena, when they are finally alone, transforms Odysseus into something so impressive, the prince questions whether he may be a god. Eurycleia recognizes a scar on Odysseus’ leg when bathing him at the palace. She vows to keep this news to herself. Although she seems to suspect, Penelope does not fully accept Odysseus as her husband until he shares his knowledge of their wedding bed.

In the opening of the epic, Telemachus is at a loss of what to do about the suitors. Being the prince, he is next in line for the crown, making things much more dangerous since the suitors also seek the crown. He is seen as nothing but deadweight, and it appears the suitors may be planning his demise. He goes on to face different challenges, falters temporarily, but prevails ultimately. With the help of Athena, Telemachus calls the leaders of Ithaca to meeting, to confront the suitors. He does not find much support, but matures nonetheless. The prince visits his father’s former comrades, King Nestor and King Menelaus, in order to learn more about his father. In turn, Telemachus learns more about himself.

The growth of Odysseus is less linear. When he left for the Trojan War, he was already quite a man. His trials have more to do with spirit refinement; his growth has something to do with the kind of wisdom and judgment that makes him a better king. Earlier on as he escapes from the island of the Cyclopes, Odysseus feels compelled to taunt Polyphemus. Odysseus shouts at the giant with his real name, allowing Polyphemus to identify his tormentor with his father, Poseidon. This brings serious problems to Odysseus and the Phaeacians later on. However, when he returns to Ithaca, Odysseus acts more cautiously. He goes into disguise to obtain information about the enemy and knowledge of whom to trust. Even when the suitors or his servants mock and aggress him, Odysseus succeeds in maintaining his composure and postponing the inevitable vindication. The time is perfect when he finally does strike. Odysseus appears to be a wiser, more perceptive leader by the end of the epic than he might have been had he sailed from Troy straight home.

Upon his escape from the island of the Cyclopes, Odysseus cannot resist taunting the blinded Polyphemus. He mistakenly reveals himself, resulting in Poseidon’s wrath being brought upon him. On his return to Ithaca, Odysseus appears to have wised up. “Just as Athena controls hero-men with the force of her spear, so hero-men must control their own forces, the desires of the heart (thumos) in order to endure.” (p. 143, Harold Bloom, James Joyce). He patiently endures the onslaught of mockery and abuse brought on by the suitors and his servants. When he finally strikes, it is unexpected. By the end of the epic, Odysseus proves to be wiser and more perceptive as a leader.

In conclusion, it can be concurred that Odysseus, though other characters are discussed, is overall a very good representation of each of the following themes: hospitality, loyalty, perseverance, vengeance, perception, and spiritual growth. As the reader, it is important to understand how these themes portray Odysseus, and the other characters of The Odyssey. Odysseus endured different types of hospitality, some proving to be too much for him. He was not entirely unfaithful to his wife, Penelope, in that he allowed himself to be embraced by the goddesses Circe and Calypso’s fine hospitality but faltered. His perseverance to return home to his wife supposedly prevailed so that he did not allow himself to be drawn completely by the goddess’ charms. Once returning home, Odysseus disguised as a beggar patiently endured the onslaught of mockery and torment brought on by the suitors, Melanthius the goatherd, and Melantho the maidservant, waiting for the proper moment to cast his revenge. He wore many disguises, altering others perception so as to not reveal himself. By the end of the epic, Odysseus evolved into a better, wiser man. Today these themes are seen everywhere. Perhaps the most predominant one being perseverance

Themes, Characteristics, and Archetypes In The Odyssey. (2020, Sep 01). Retrieved from https://papersowl.com/examples/themes-characteristics-and-archetypes-in-the-odyssey/

Themes of the Odyssey

The Characters of the Odyssey