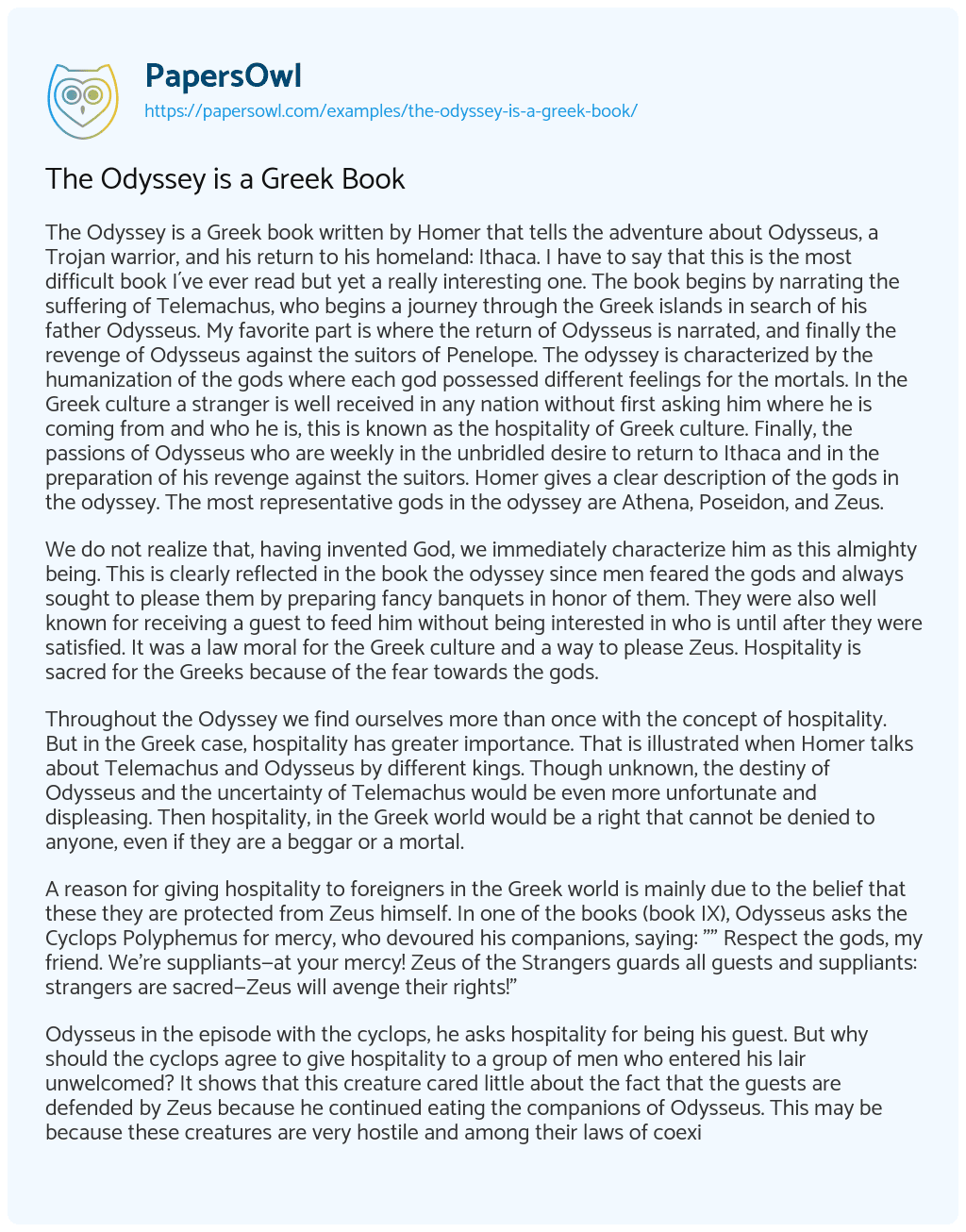 The Odyssey is a Greek book written by Homer that tells the adventure about Odysseus, a Trojan warrior, and his return to his homeland: Ithaca. I have to say that this is the most difficult book I´ve ever read but yet a really interesting one. The book begins by narrating the suffering of Telemachus, who begins a journey through the Greek islands in search of his father Odysseus. My favorite part is where the return of Odysseus is narrated, and finally the revenge of Odysseus against the suitors of Penelope. The odyssey is characterized by the humanization of the gods where each god possessed different feelings for the mortals. In the Greek culture a stranger is well received in any nation without first asking him where he is coming from and who he is, this is known as the hospitality of Greek culture. Finally, the passions of Odysseus who are weekly in the unbridled desire to return to Ithaca and in the preparation of his revenge against the suitors. Homer gives a clear description of the gods in the odyssey. The most representative gods in the odyssey are Athena, Poseidon, and Zeus.

We do not realize that, having invented God, we immediately characterize him as this almighty being. This is clearly reflected in the book the odyssey since men feared the gods and always sought to please them by preparing fancy banquets in honor of them. They were also well known for receiving a guest to feed him without being interested in who is until after they were satisfied. It was a law moral for the Greek culture and a way to please Zeus. Hospitality is sacred for the Greeks because of the fear towards the gods.

Throughout the Odyssey we find ourselves more than once with the concept of hospitality. But in the Greek case, hospitality has greater importance. That is illustrated when Homer talks about Telemachus and Odysseus by different kings. Though unknown, the destiny of Odysseus and the uncertainty of Telemachus would be even more unfortunate and displeasing. Then hospitality, in the Greek world would be a right that cannot be denied to anyone, even if they are a beggar or a mortal.

A reason for giving hospitality to foreigners in the Greek world is mainly due to the belief that these they are protected from Zeus himself. In one of the books (book IX), Odysseus asks the Cyclops Polyphemus for mercy, who devoured his companions, saying: “” Respect the gods, my friend. We’re suppliants—at your mercy! Zeus of the Strangers guards all guests and suppliants: strangers are sacred—Zeus will avenge their rights!”

Odysseus in the episode with the cyclops, he asks hospitality for being his guest. But why should the cyclops agree to give hospitality to a group of men who entered his lair unwelcomed? It shows that this creature cared little about the fact that the guests are defended by Zeus because he continued eating the companions of Odysseus. This may be because these creatures are very hostile and among their laws of coexistence. Odysseus ate of his sheep because in his subconscious he knew that whoever lived in that cave would give them hospitality, something that did not happen. Men, unlike creatures such as the Cyclopes, had this ingrained to host the strangers.

The Greeks are fearful of Zeus, because he gives protection to the guests, but on the other hand being a hospitable man in the Greek world is linked to goodness. It is thought that the Gods are often shown to men in any way and it is for this reason that men should never discriminate against those who help. Zeus wants the men to be hospitable to the guests because anyone can meet for help. Sometimes even the gods would appear as beggars. Odysseus when he returns to Ithaca transformed into an old man. He then enters his own palace and asks all the suitors to know who are those men who invade his house. He realizes that some treat him with pity while others treat him badly and deny him hospitality. The attitude that they present is not very far from the attitudes of our society, people are treated by the appearance, it would be rare to host those we do not know and even more if that person looks dirty or sick.

Another indication of the hospitality that is present in The Odyssey, is what happens with the suitors in the palace of Odysseus, the suitors are described as men who are busy feasting every night, killing the best animals, destroying property that is Odysseus and his son Telemachus and wife Penelope, although the rest of the people think that they act badly, it doesn’t talk about they being invaders or thieves, at no time Homer mentions these suitors are criminals, which means that Homer does not consider them as such, for the reason that it is part of the rules of lodging, although it is always implied that these men are not good, since they are using resources that are not theirs. The suitors do not seem aware that they are doing something horrible, because they feel they are still guests and should be treated as such, it is the duty of the owners of the palace to give them food and wine, even though they are Penelope’s suitors.

For me it would be more reasonable that they were the ones who entertained the lonely Penelope and not that they lived for years at the expense of the wealth of her palace. Not even Telemachus feels empowered to drive them out of his palace, nor can it be understood why Penelope simply does not send them back to their respective homes; this is a reflection that the importance of hospitality was such that even instances like these were given, where the guests abused the attentions of their hosts.

I conclude that Homer in the Odyssey wanted to emphasize the hospitable aspect, since it does not diminish the number of hospital scenes. Constantly it was narrated that someone received another, emphasis was placed on the details of how these receptions were. Some were good and others neglected. Taking into account that Homer´s two great works were the favorite educational sources of the Greeks; the hospitality character was an important aspect in their life. One cannot judge whether this characteristic of Greek identity is good or bad, but that hosting someone was a right that could not be denied. That is very clear, either because they were fearful of Zeus or because of wanting to act correctly, in the Homeric sense.”

The Odyssey is a Greek Book. (2021, Jun 26). Retrieved from https://papersowl.com/examples/the-odyssey-is-a-greek-book/