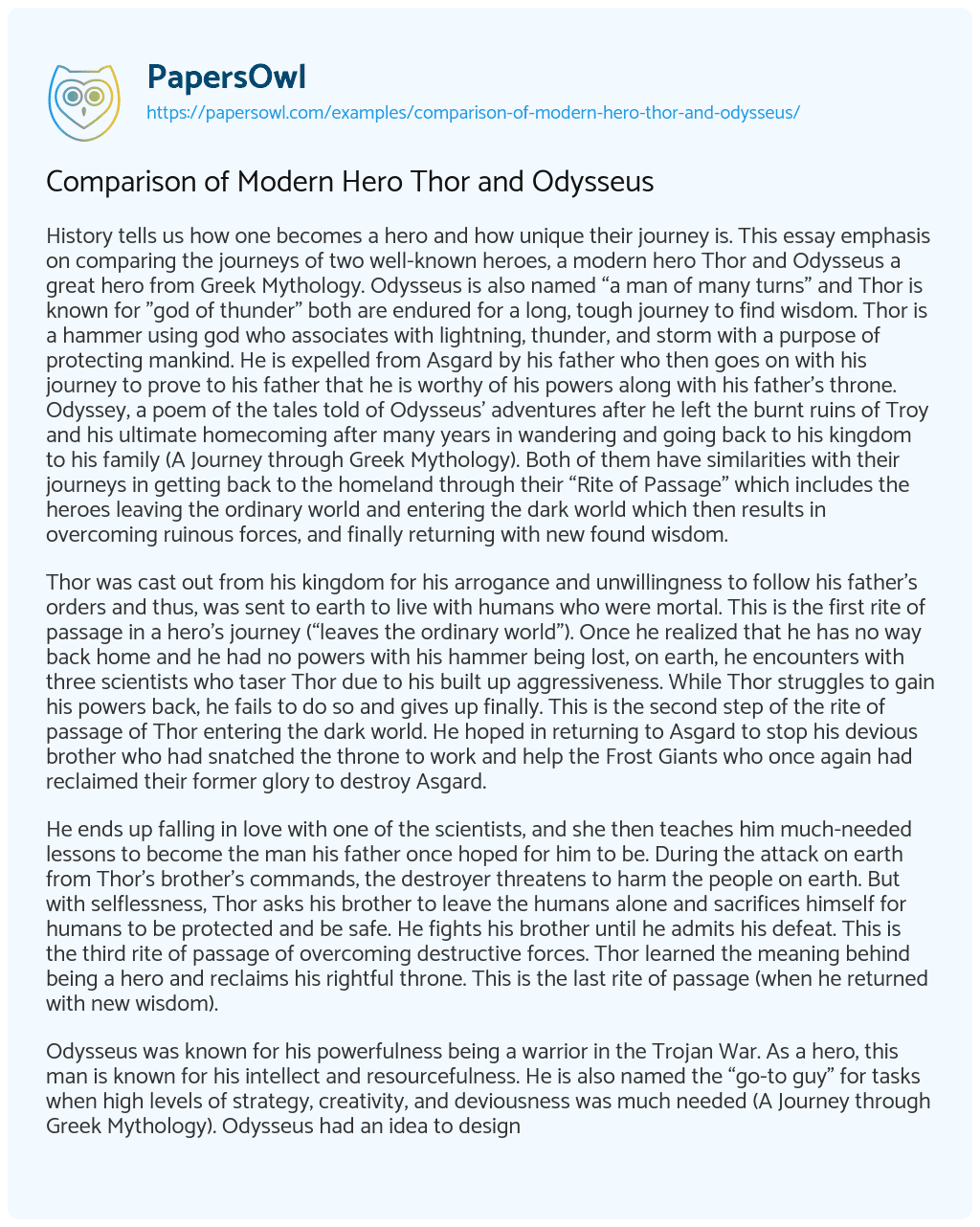 History tells us how one becomes a hero and how unique their journey is. This essay emphasis on comparing the journeys of two well-known heroes, a modern hero Thor and Odysseus a great hero from Greek Mythology. Odysseus is also named “a man of many turns” and Thor is known for “god of thunder” both are endured for a long, tough journey to find wisdom. Thor is a hammer using god who associates with lightning, thunder, and storm with a purpose of protecting mankind. He is expelled from Asgard by his father who then goes on with his journey to prove to his father that he is worthy of his powers along with his father’s throne. Odyssey, a poem of the tales told of Odysseus’ adventures after he left the burnt ruins of Troy and his ultimate homecoming after many years in wandering and going back to his kingdom to his family (A Journey through Greek Mythology). Both of them have similarities with their journeys in getting back to the homeland through their “Rite of Passage” which includes the heroes leaving the ordinary world and entering the dark world which then results in overcoming ruinous forces, and finally returning with new found wisdom.

Thor was cast out from his kingdom for his arrogance and unwillingness to follow his father’s orders and thus, was sent to earth to live with humans who were mortal. This is the first rite of passage in a hero’s journey (“leaves the ordinary world”). Once he realized that he has no way back home and he had no powers with his hammer being lost, on earth, he encounters with three scientists who taser Thor due to his built up aggressiveness. While Thor struggles to gain his powers back, he fails to do so and gives up finally. This is the second step of the rite of passage of Thor entering the dark world. He hoped in returning to Asgard to stop his devious brother who had snatched the throne to work and help the Frost Giants who once again had reclaimed their former glory to destroy Asgard.

He ends up falling in love with one of the scientists, and she then teaches him much-needed lessons to become the man his father once hoped for him to be. During the attack on earth from Thor’s brother’s commands, the destroyer threatens to harm the people on earth. But with selflessness, Thor asks his brother to leave the humans alone and sacrifices himself for humans to be protected and be safe. He fights his brother until he admits his defeat. This is the third rite of passage of overcoming destructive forces. Thor learned the meaning behind being a hero and reclaims his rightful throne. This is the last rite of passage (when he returned with new wisdom).

Odysseus was known for his powerfulness being a warrior in the Trojan War. As a hero, this man is known for his intellect and resourcefulness. He is also named the “go-to guy” for tasks when high levels of strategy, creativity, and deviousness was much needed (A Journey through Greek Mythology). Odysseus had an idea to design the Trojan Horse which was a trick that he had won the war for the Greeks. With the help of his patron goddess, Athena by his side, Odysseus meets many challenges with his courage, strength, and intellect by his side. Then, Odysseus leaves the burning ruins of Troy to carrying it back home. He and his men traveled to the Land of the Cyclops for food and water and ended up stealing from the town by tricking and stabbing the Cyclops’ eye out. After getting away safely, Odysseus gloated with his success and gave his true name to the Cyclops. The injured Cyclops calls his father Poseidon to send a curse on Odysseus who was involved with him in having for many years of sadness, trouble, and wandering.

This is would be one of the examples of Odysseus as a journey of a hero while entering the dark world. While reading more about him, it was vivid to know that he also had to face great challenges in the lands of Aeolia, Laestrygonians, Circe’s Land, a visit to Hades, encountering sirens, Scylla and Charybdis, Island of the Sun God and Calypso, Scheria and then finally his arrival at Ithaka. The challenges he had faced made him face all the challenges that Poseidon cursed him with and after all his many years of being in trouble all alone with him being on someone else’s ship made him go back home to his family. His works led him to win back his rightful place as the king with his family until one day, Odysseus was defending his herds from his unknown son who at the end shot Odysseus with an arrow and took his life. He was warned that his death would come from the sea.

The journey is at times started by a crossing over to a world of dark forces where supernatural creatures such as demons, Cyclops, monsters and other enemies of the hero are encounters who are on their own quest. Odysseus is from a distant era whereas Thor is from a modern time of heroes but converge with the similarities of in their mindsets in getting back to their homeland where they belong. From my position view, Thor and Odysseus’ biggest flaw being in character was their arrogance.

Which lead them to many worse situations that could have been stopped or prevented. So their journey in getting back home became much harder and longer than expected. Both, Thor and Odysseus share similar traits which are courage, confidence, nobility, battle intelligence, powerful physically and a desire for glory. Both of these main characters show a different version of heroism with Odyssey showing a humble and ideal one and on the other hand, Thor being more of an egocentric. Both of these heroes face their challenges in dealing with and triumphant with their enemies. Thor defeats the “Destroyer” and Odysseus defeats the Cyclops, sirens and many others.