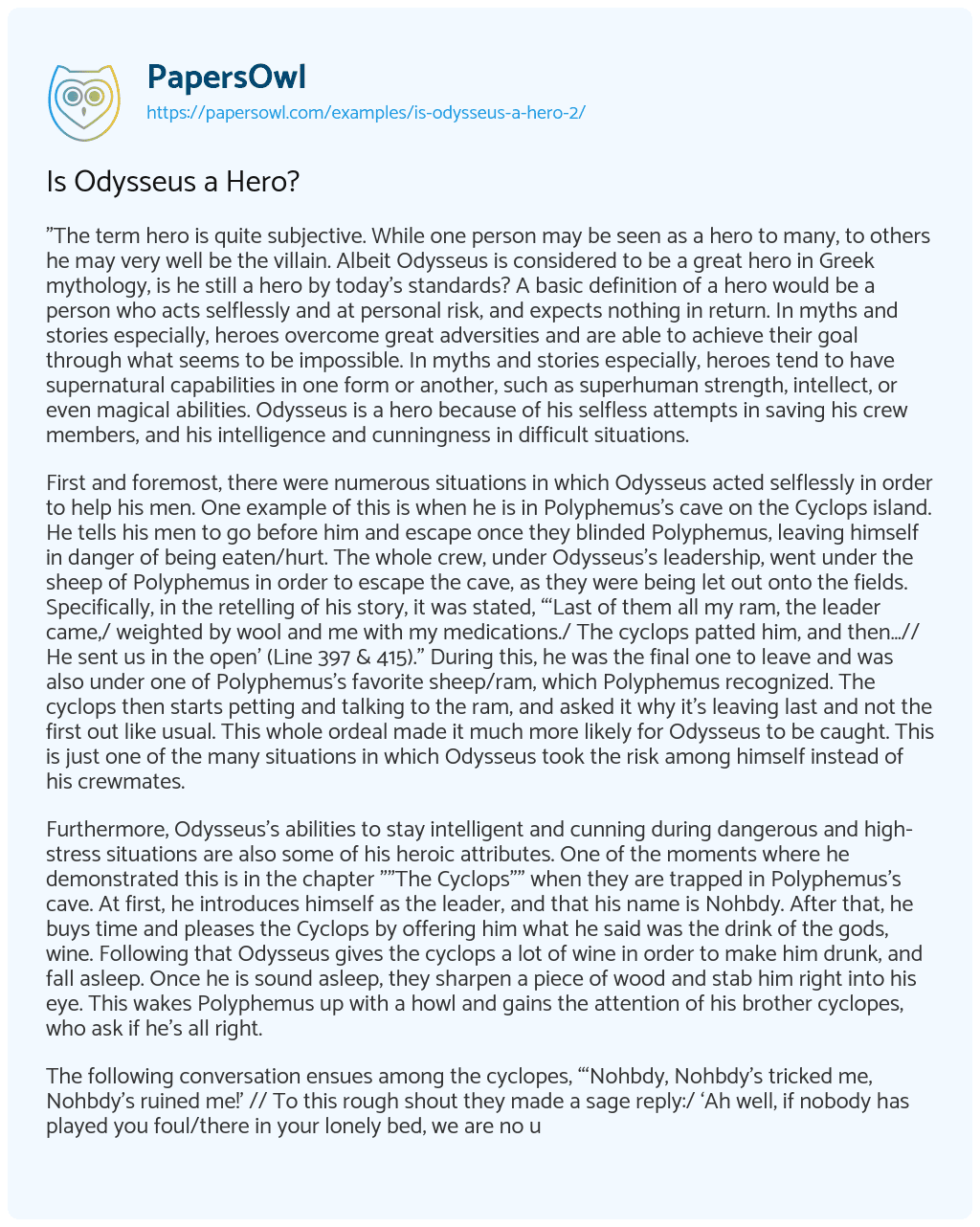 “The term hero is quite subjective. While one person may be seen as a hero to many, to others he may very well be the villain. Albeit Odysseus is considered to be a great hero in Greek mythology, is he still a hero by today’s standards? A basic definition of a hero would be a person who acts selflessly and at personal risk, and expects nothing in return. In myths and stories especially, heroes overcome great adversities and are able to achieve their goal through what seems to be impossible. In myths and stories especially, heroes tend to have supernatural capabilities in one form or another, such as superhuman strength, intellect, or even magical abilities. Odysseus is a hero because of his selfless attempts in saving his crew members, and his intelligence and cunningness in difficult situations.

First and foremost, there were numerous situations in which Odysseus acted selflessly in order to help his men. One example of this is when he is in Polyphemus’s cave on the Cyclops island. He tells his men to go before him and escape once they blinded Polyphemus, leaving himself in danger of being eaten/hurt. The whole crew, under Odysseus’s leadership, went under the sheep of Polyphemus in order to escape the cave, as they were being let out onto the fields. Specifically, in the retelling of his story, it was stated, “‘Last of them all my ram, the leader came,/ weighted by wool and me with my medications./ The cyclops patted him, and then…// He sent us in the open’ (Line 397 & 415).” During this, he was the final one to leave and was also under one of Polyphemus’s favorite sheep/ram, which Polyphemus recognized. The cyclops then starts petting and talking to the ram, and asked it why it’s leaving last and not the first out like usual. This whole ordeal made it much more likely for Odysseus to be caught. This is just one of the many situations in which Odysseus took the risk among himself instead of his crewmates.

Furthermore, Odysseus’s abilities to stay intelligent and cunning during dangerous and high-stress situations are also some of his heroic attributes. One of the moments where he demonstrated this is in the chapter “”The Cyclops”” when they are trapped in Polyphemus’s cave. At first, he introduces himself as the leader, and that his name is Nohbdy. After that, he buys time and pleases the Cyclops by offering him what he said was the drink of the gods, wine. Following that Odysseus gives the cyclops a lot of wine in order to make him drunk, and fall asleep. Once he is sound asleep, they sharpen a piece of wood and stab him right into his eye. This wakes Polyphemus up with a howl and gains the attention of his brother cyclopes, who ask if he’s all right.

The following conversation ensues among the cyclopes, “‘Nohbdy, Nohbdy’s tricked me, Nohbdy’s ruined me!’ // To this rough shout they made a sage reply:/ ‘Ah well, if nobody has played you foul/there in your lonely bed, we are no use in pain/ given by great Zeus. Let it be your father,/Poseidon Lord, to whom you pray.’ (Line 360)”. After this, he waited until the sheep were going to be let out, and then told his men to strap themselves to the bottom of the sheep in order to escape. Odysseus was single-handedly able to out with all the Cyclops on the island, and because of that saved most of his men from being killed and eaten by Polyphemus.”