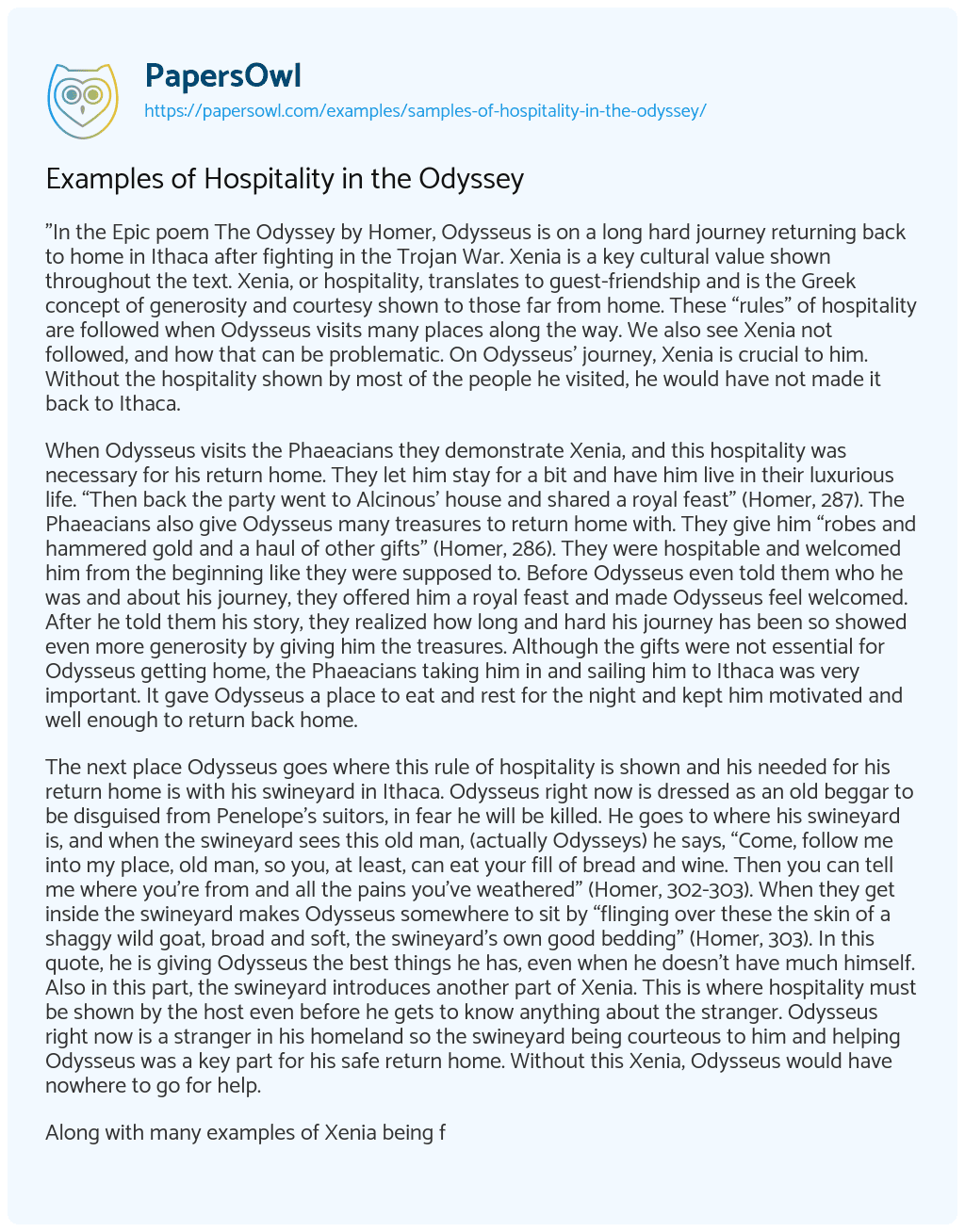 “In the Epic poem The Odyssey by Homer, Odysseus is on a long hard journey returning back to home in Ithaca after fighting in the Trojan War. Xenia is a key cultural value shown throughout the text. Xenia, or hospitality, translates to guest-friendship and is the Greek concept of generosity and courtesy shown to those far from home. These “rules” of hospitality are followed when Odysseus visits many places along the way. We also see Xenia not followed, and how that can be problematic. On Odysseus’ journey, Xenia is crucial to him. Without the hospitality shown by most of the people he visited, he would have not made it back to Ithaca.

When Odysseus visits the Phaeacians they demonstrate Xenia, and this hospitality was necessary for his return home. They let him stay for a bit and have him live in their luxurious life. “Then back the party went to Alcinous’ house and shared a royal feast” (Homer, 287). The Phaeacians also give Odysseus many treasures to return home with. They give him “robes and hammered gold and a haul of other gifts” (Homer, 286). They were hospitable and welcomed him from the beginning like they were supposed to. Before Odysseus even told them who he was and about his journey, they offered him a royal feast and made Odysseus feel welcomed. After he told them his story, they realized how long and hard his journey has been so showed even more generosity by giving him the treasures. Although the gifts were not essential for Odysseus getting home, the Phaeacians taking him in and sailing him to Ithaca was very important. It gave Odysseus a place to eat and rest for the night and kept him motivated and well enough to return back home.

The next place Odysseus goes where this rule of hospitality is shown and his needed for his return home is with his swineyard in Ithaca. Odysseus right now is dressed as an old beggar to be disguised from Penelope’s suitors, in fear he will be killed. He goes to where his swineyard is, and when the swineyard sees this old man, (actually Odysseys) he says, “Come, follow me into my place, old man, so you, at least, can eat your fill of bread and wine. Then you can tell me where you’re from and all the pains you’ve weathered” (Homer, 302-303). When they get inside the swineyard makes Odysseus somewhere to sit by “flinging over these the skin of a shaggy wild goat, broad and soft, the swineyard’s own good bedding” (Homer, 303). In this quote, he is giving Odysseus the best things he has, even when he doesn’t have much himself. Also in this part, the swineyard introduces another part of Xenia. This is where hospitality must be shown by the host even before he gets to know anything about the stranger. Odysseus right now is a stranger in his homeland so the swineyard being courteous to him and helping Odysseus was a key part for his safe return home. Without this Xenia, Odysseus would have nowhere to go for help.

Along with many examples of Xenia being followed, there are times where this concept is not followed. One of these times is when Odysseus and his crew visit the land of the Laestrygonians. When they go inside to meet Antiphates, he doesn’t show any hospitality. Antiphates immediately grabs “one of my men, he tore him up for dinner” (Homer, 234). Things go wrong when Xenia is not followed, and Odysseus says, “From there we sailed on, glad to escape our death yet sick at heart for the dear companions we had lost”(Homer, 234). This impacted their journey because they now do not have any help navigating around so far from home. They are hungry and tired of being on the water. Odysseus lost his ship and many members of his crew, and they will now be worried and uneasy about trusting other people they come across. Without hospitality shown from strangers, it makes getting home even harder. When people follow the rules of Xenia, everything goes smoothly. But when Xenia is not followed, the common customs of hospitality are lost, causing many things to go wrong. This part of the book really highlights the importance of the custom of hospitality.

In conclusion, Xenia being followed by everyone Odysseus encounters is imperative for his safe return home. Throughout The Odyssey by Homer, there are many examples of good hospitality: the Phaeacians and the swineyard, but also examples of bad hospitality: the Laestrygonians. Greek mythology usually has underlying lessons, themes, and morals. Seeing the kindness shown by others to complete strangers in this epic teaches readers about the importance of hospitality and being kind and courteous to everyone. With everything Odysseus went through it is a miracle he got back alive, and this is the direct cause of all the courtesy, generosity, and hospitality shown by everyone he came across.”

Examples of Hospitality in the Odyssey. (2021, Apr 20). Retrieved from https://papersowl.com/examples/samples-of-hospitality-in-the-odyssey/