Gender Roles in the Oddyssey 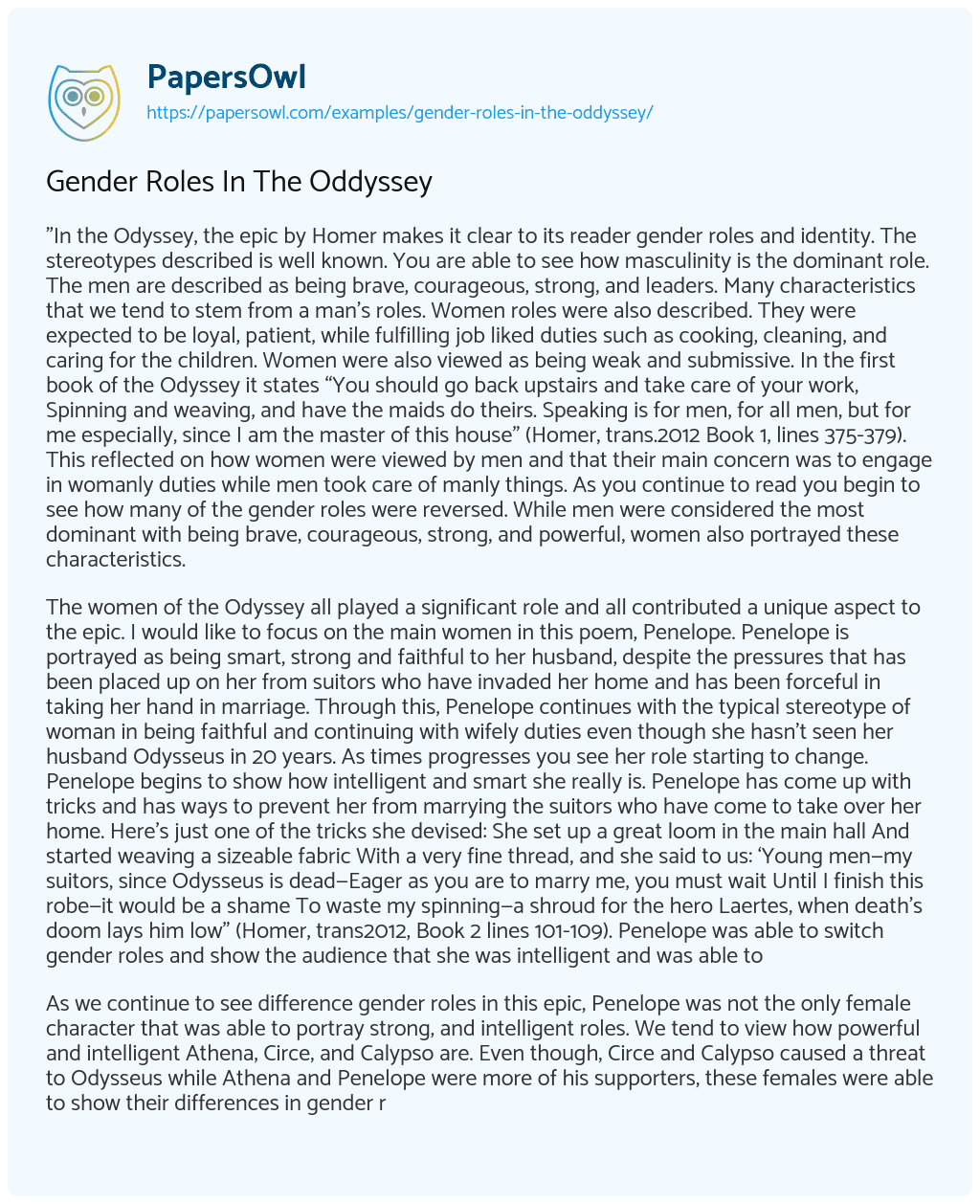 “In the Odyssey, the epic by Homer makes it clear to its reader gender roles and identity. The stereotypes described is well known. You are able to see how masculinity is the dominant role. The men are described as being brave, courageous, strong, and leaders. Many characteristics that we tend to stem from a man’s roles. Women roles were also described. They were expected to be loyal, patient, while fulfilling job liked duties such as cooking, cleaning, and caring for the children. Women were also viewed as being weak and submissive. In the first book of the Odyssey it states “You should go back upstairs and take care of your work, Spinning and weaving, and have the maids do theirs. Speaking is for men, for all men, but for me especially, since I am the master of this house” (Homer, trans.2012 Book 1, lines 375-379). This reflected on how women were viewed by men and that their main concern was to engage in womanly duties while men took care of manly things. As you continue to read you begin to see how many of the gender roles were reversed. While men were considered the most dominant with being brave, courageous, strong, and powerful, women also portrayed these characteristics.

The women of the Odyssey all played a significant role and all contributed a unique aspect to the epic. I would like to focus on the main women in this poem, Penelope. Penelope is portrayed as being smart, strong and faithful to her husband, despite the pressures that has been placed up on her from suitors who have invaded her home and has been forceful in taking her hand in marriage. Through this, Penelope continues with the typical stereotype of woman in being faithful and continuing with wifely duties even though she hasn’t seen her husband Odysseus in 20 years. As times progresses you see her role starting to change. Penelope begins to show how intelligent and smart she really is. Penelope has come up with tricks and has ways to prevent her from marrying the suitors who have come to take over her home. Here’s just one of the tricks she devised: She set up a great loom in the main hall And started weaving a sizeable fabric With a very fine thread, and she said to us: ‘Young men—my suitors, since Odysseus is dead—Eager as you are to marry me, you must wait Until I finish this robe—it would be a shame To waste my spinning—a shroud for the hero Laertes, when death’s doom lays him low” (Homer, trans2012, Book 2 lines 101-109). Penelope was able to switch gender roles and show the audience that she was intelligent and was able to

As we continue to see difference gender roles in this epic, Penelope was not the only female character that was able to portray strong, and intelligent roles. We tend to view how powerful and intelligent Athena, Circe, and Calypso are. Even though, Circe and Calypso caused a threat to Odysseus while Athena and Penelope were more of his supporters, these females were able to show their differences in gender roles. Circe‘s role in the Odyssey was that she was able to demonstrate being powerful and using her magical powers. With this, Circe role was as great significance because without her help and guidance, Odysseus would not have managed returning home to Ithaca.

Although Calypso is considered more dangerous because of her ability to save Odysseus and then imprisoned him, Calypso is able to exhibit these male- like characteristics to make Odysseus her husband. Athena helps Odysseus through many obstacles. Athena roles defines her as being confident, intelligent and powerful, which makes her role significant in the Odyssey. Athena’s supportive attributes has helped Odysseus on his journey to return home.”

Gender Roles In The Oddyssey. (2021, May 27). Retrieved from https://papersowl.com/examples/gender-roles-in-the-oddyssey/

Women are Just as Important as Men