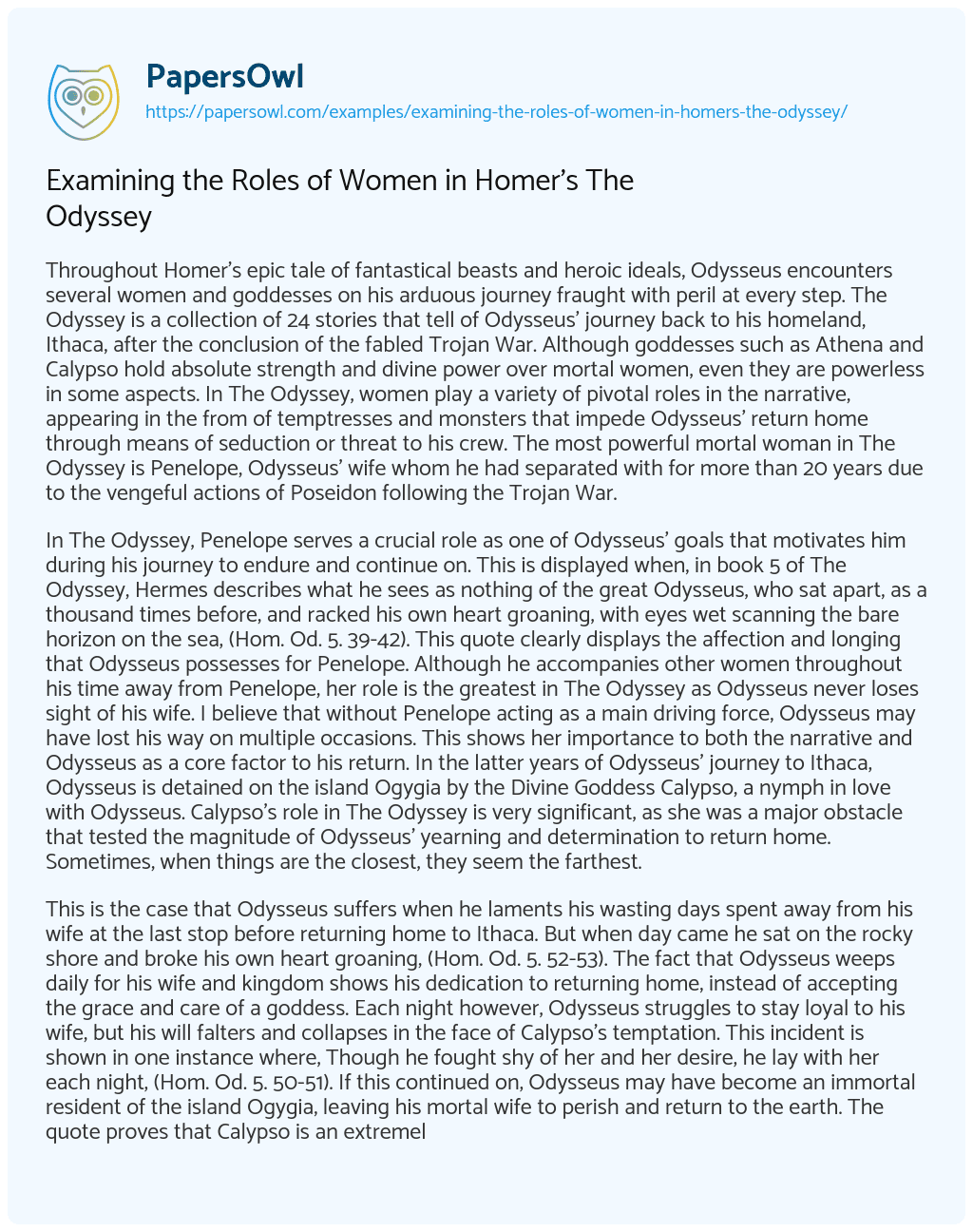 Throughout Homer’s epic tale of fantastical beasts and heroic ideals, Odysseus encounters several women and goddesses on his arduous journey fraught with peril at every step. The Odyssey is a collection of 24 stories that tell of Odysseus’ journey back to his homeland, Ithaca, after the conclusion of the fabled Trojan War. Although goddesses such as Athena and Calypso hold absolute strength and divine power over mortal women, even they are powerless in some aspects. In The Odyssey, women play a variety of pivotal roles in the narrative, appearing in the from of temptresses and monsters that impede Odysseus’ return home through means of seduction or threat to his crew. The most powerful mortal woman in The Odyssey is Penelope, Odysseus’ wife whom he had separated with for more than 20 years due to the vengeful actions of Poseidon following the Trojan War.

In The Odyssey, Penelope serves a crucial role as one of Odysseus’ goals that motivates him during his journey to endure and continue on. This is displayed when, in book 5 of The Odyssey, Hermes describes what he sees as nothing of the great Odysseus, who sat apart, as a thousand times before, and racked his own heart groaning, with eyes wet scanning the bare horizon on the sea, (Hom. Od. 5. 39-42). This quote clearly displays the affection and longing that Odysseus possesses for Penelope. Although he accompanies other women throughout his time away from Penelope, her role is the greatest in The Odyssey as Odysseus never loses sight of his wife. I believe that without Penelope acting as a main driving force, Odysseus may have lost his way on multiple occasions. This shows her importance to both the narrative and Odysseus as a core factor to his return. In the latter years of Odysseus’ journey to Ithaca, Odysseus is detained on the island Ogygia by the Divine Goddess Calypso, a nymph in love with Odysseus. Calypso’s role in The Odyssey is very significant, as she was a major obstacle that tested the magnitude of Odysseus’ yearning and determination to return home. Sometimes, when things are the closest, they seem the farthest.

This is the case that Odysseus suffers when he laments his wasting days spent away from his wife at the last stop before returning home to Ithaca. But when day came he sat on the rocky shore and broke his own heart groaning, (Hom. Od. 5. 52-53). The fact that Odysseus weeps daily for his wife and kingdom shows his dedication to returning home, instead of accepting the grace and care of a goddess. Each night however, Odysseus struggles to stay loyal to his wife, but his will falters and collapses in the face of Calypso’s temptation. This incident is shown in one instance where, Though he fought shy of her and her desire, he lay with her each night, (Hom. Od. 5. 50-51). If this continued on, Odysseus may have become an immortal resident of the island Ogygia, leaving his mortal wife to perish and return to the earth. The quote proves that Calypso is an extremely formidable goddess, as it is not until Hermes declares to Calypso the mandate of Zeus to release Odysseus that she assists in his departure. Among the women in The Odyssey, Circle holds considerable power and influence over Odysseus with her arcane and temptress skills. Circe displays the Ancient Greek stereotype of manipulative women and their actions, as well as play a critical role in Odysseus’ journey. Circe is a goddess witch who resides on the island of Aeaea with a retinue of maids and magical beasts. While the second platoon is feasting in the residence of Circe, they consume amber honey mixed with Pramnian wine, [with] her own vile pinch, (Hom. Od. 10. 29-30).

Circe showcases the stereotype of being manipulative when she puts on a front of kindness to trick Eurylochus’ men into drinking poisoned wine that turned them into swine. This quote shows the potency of Circe’s divine magic which turns men into pigs with a small pinch of dust. I believe that although Circe may hold the most power in The Odyssey, Odysseus is able to circumvent this issue using the magic plant called moly, meaning that she did not impact Odysseus as much as Calypso or Penelope. Circe directs Odysseus and his crew on what they must do to continue their journey, which is to meet the ghost of Tiresias and hear a prophecy from him in the Land of the Dead. This event is critical to Odysseus’ journey as it foretells of the dangers Odysseus and his crew will encounter, leaving them better prepared for when the situations arise.

Examining the Roles of Women in Homer's The Odyssey. (2020, Apr 04). Retrieved from https://papersowl.com/examples/examining-the-roles-of-women-in-homers-the-odyssey/

Women in Homer’s “The Odyssey”