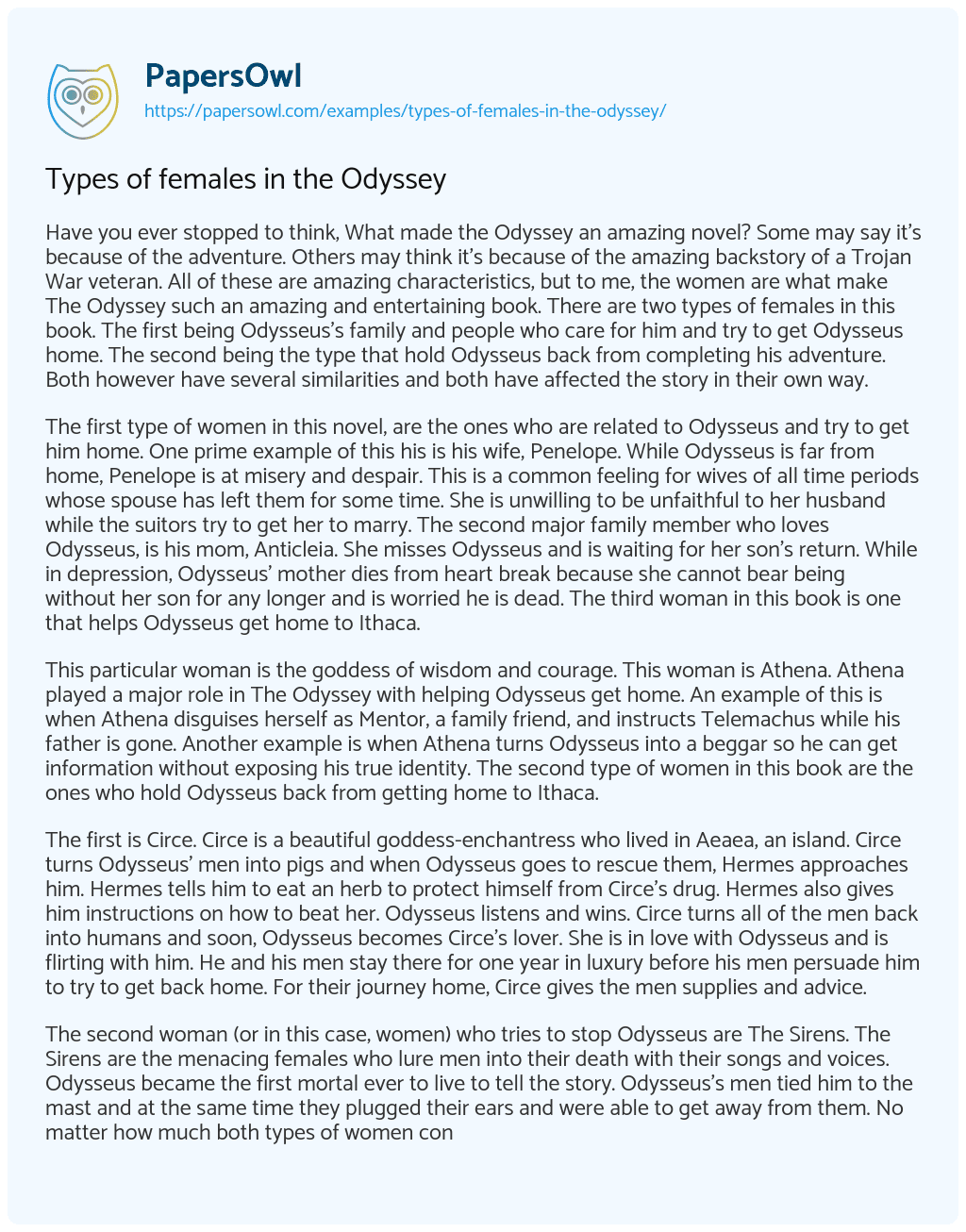 Have you ever stopped to think, What made the Odyssey an amazing novel? Some may say it’s because of the adventure. Others may think it’s because of the amazing backstory of a Trojan War veteran. All of these are amazing characteristics, but to me, the women are what make The Odyssey such an amazing and entertaining book. There are two types of females in this book. The first being Odysseus’s family and people who care for him and try to get Odysseus home. The second being the type that hold Odysseus back from completing his adventure. Both however have several similarities and both have affected the story in their own way.

The first type of women in this novel, are the ones who are related to Odysseus and try to get him home. One prime example of this his is his wife, Penelope. While Odysseus is far from home, Penelope is at misery and despair. This is a common feeling for wives of all time periods whose spouse has left them for some time. She is unwilling to be unfaithful to her husband while the suitors try to get her to marry. The second major family member who loves Odysseus, is his mom, Anticleia. She misses Odysseus and is waiting for her son’s return. While in depression, Odysseus’ mother dies from heart break because she cannot bear being without her son for any longer and is worried he is dead. The third woman in this book is one that helps Odysseus get home to Ithaca.

This particular woman is the goddess of wisdom and courage. This woman is Athena. Athena played a major role in The Odyssey with helping Odysseus get home. An example of this is when Athena disguises herself as Mentor, a family friend, and instructs Telemachus while his father is gone. Another example is when Athena turns Odysseus into a beggar so he can get information without exposing his true identity. The second type of women in this book are the ones who hold Odysseus back from getting home to Ithaca.

The first is Circe. Circe is a beautiful goddess-enchantress who lived in Aeaea, an island. Circe turns Odysseus’ men into pigs and when Odysseus goes to rescue them, Hermes approaches him. Hermes tells him to eat an herb to protect himself from Circe’s drug. Hermes also gives him instructions on how to beat her. Odysseus listens and wins. Circe turns all of the men back into humans and soon, Odysseus becomes Circe’s lover. She is in love with Odysseus and is flirting with him. He and his men stay there for one year in luxury before his men persuade him to try to get back home. For their journey home, Circe gives the men supplies and advice.

The second woman (or in this case, women) who tries to stop Odysseus are The Sirens. The Sirens are the menacing females who lure men into their death with their songs and voices. Odysseus became the first mortal ever to live to tell the story. Odysseus’s men tied him to the mast and at the same time they plugged their ears and were able to get away from them. No matter how much both types of women contrast in this book, they both affect the plot in some way. Whether it be bad or good, all women have changed the story of The Odyssey. The reason this book is so popular is because of the differences of female characters of this novel. Each female is unique in some way and they all have made this book very interesting. The goddesses who tried to stop Odysseus gave him and his men a great conflict for them to overcome. This teaches young readers a lesson to not give up on accomplishing their goal. The women who tried to help Odysseus tell young readers that you will always have friends and family to help you no matter how alone you think you are. As you can see, women are the reason The Odyssey is an amazing and exciting book for all ages. Because of women, the plot has been filled with so many minor adventures that all eventually lead up to the resolution. Without BOTH types of women, the book wouldn’t have been complete. The type who helped Odysseus and the type that did not help Odysseus, They go together like PB&J. All in all, the Odyssey is the great book it is because of the women.

Types of females in the Odyssey. (2019, Nov 02). Retrieved from https://papersowl.com/examples/types-of-females-in-the-odyssey/