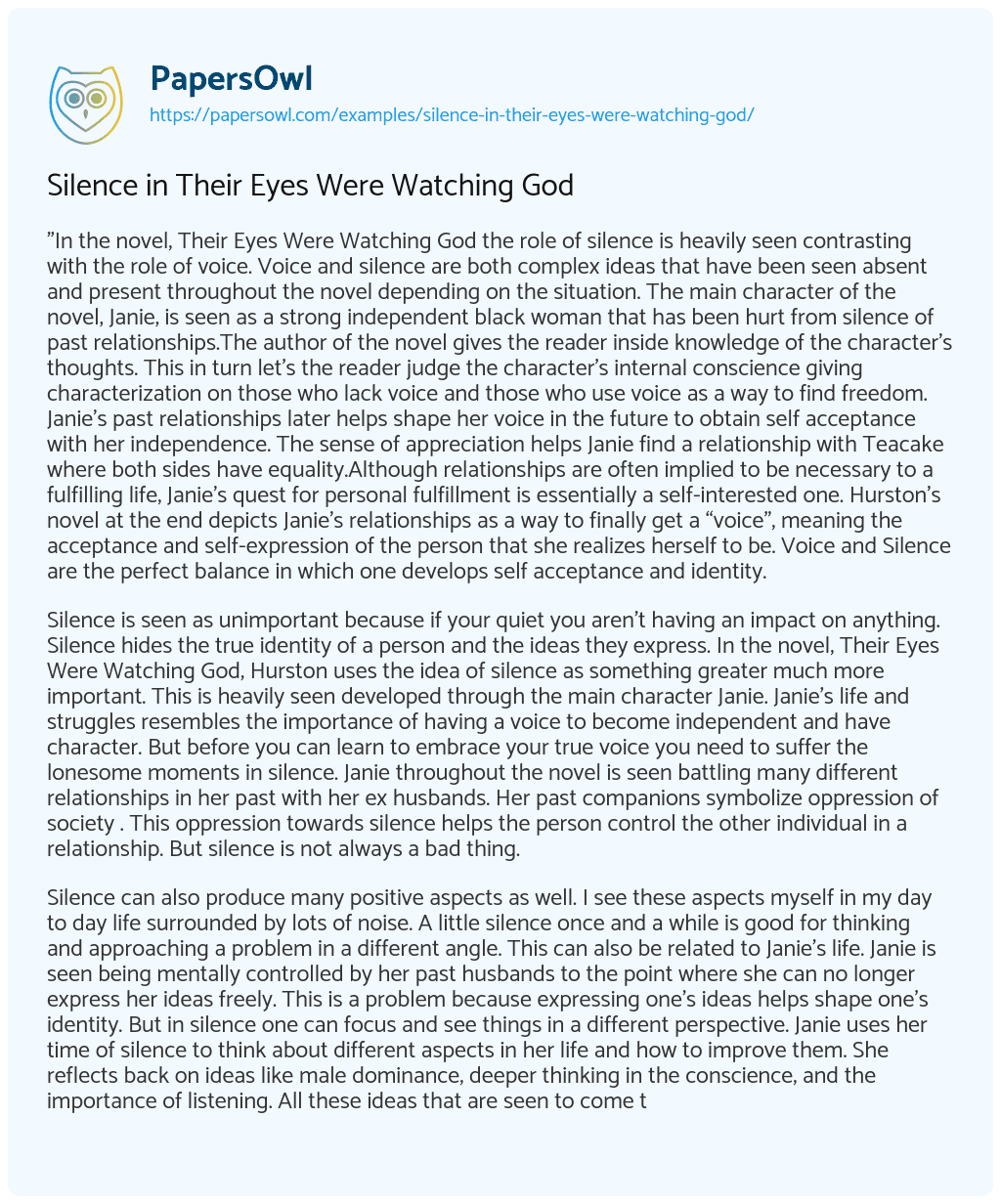 “In the novel, Their Eyes Were Watching God the role of silence is heavily seen contrasting with the role of voice. Voice and silence are both complex ideas that have been seen absent and present throughout the novel depending on the situation. The main character of the novel, Janie, is seen as a strong independent black woman that has been hurt from silence of past relationships.The author of the novel gives the reader inside knowledge of the character’s thoughts. This in turn let’s the reader judge the character’s internal conscience giving characterization on those who lack voice and those who use voice as a way to find freedom. Janie’s past relationships later helps shape her voice in the future to obtain self acceptance with her independence. The sense of appreciation helps Janie find a relationship with Teacake where both sides have equality.Although relationships are often implied to be necessary to a fulfilling life, Janie’s quest for personal fulfillment is essentially a self-interested one. Hurston’s novel at the end depicts Janie’s relationships as a way to finally get a “voice”, meaning the acceptance and self-expression of the person that she realizes herself to be. Voice and Silence are the perfect balance in which one develops self acceptance and identity.

Silence is seen as unimportant because if your quiet you aren’t having an impact on anything. Silence hides the true identity of a person and the ideas they express. In the novel, Their Eyes Were Watching God, Hurston uses the idea of silence as something greater much more important. This is heavily seen developed through the main character Janie. Janie’s life and struggles resembles the importance of having a voice to become independent and have character. But before you can learn to embrace your true voice you need to suffer the lonesome moments in silence. Janie throughout the novel is seen battling many different relationships in her past with her ex husbands. Her past companions symbolize oppression of society . This oppression towards silence helps the person control the other individual in a relationship. But silence is not always a bad thing.

Silence can also produce many positive aspects as well. I see these aspects myself in my day to day life surrounded by lots of noise. A little silence once and a while is good for thinking and approaching a problem in a different angle. This can also be related to Janie’s life. Janie is seen being mentally controlled by her past husbands to the point where she can no longer express her ideas freely. This is a problem because expressing one’s ideas helps shape one’s identity. But in silence one can focus and see things in a different perspective. Janie uses her time of silence to think about different aspects in her life and how to improve them. She reflects back on ideas like male dominance, deeper thinking in the conscience, and the importance of listening. All these ideas that are seen to come to light through silence help Janie find a voice.

Janie is seen partake in many marriages in the novel that involved a lot of manipulation. Within each marriage there were problems that helped her learn and expand into a strong independent woman. Her first marriage was with ,a man laborer that only cared about himself, named Logan Killicks. This marriage was forced by her Nanny and due to the self guiltiness of not living up to her Nanny’s expectations. Janie gets lured into this terrible marriage with no love. Janie is convinced by her Nanny that everything will be okay, “Yo’ Nanny wouldn’t harm a hair uh yo’ head. She don’t want nobody else to do it neither if she kin help it” (Hurston 14). This relationship at the end taught Janie that marriage does not always come with love. Love involves both sides having opportunity to voice their opinions and discuss their views on the relationship. Hurston shows that self-love is having the freedom of expressing yourself.

The marriage involved with Joe Starks, Janie is seen to just be a follower to whatever Joe wants. Joe gave her guidelines on how she could dress and not dress. Joe told her what gatherings she could go to and not. Joe basically controlled Janie’s in every aspect of her life. Which basically takes away the right of living and free will. ‘She went through many silent rebellions over things like that. Such a waste of life and time. But Joe kept saying that she could do it if she wanted to and he wanted her to use her privileges. That was the rock she was battered against.’ (Hurston, 51). This quote basically sums up the social and emotional isolation she had to put up with. This isolationism led to silence but within silence she able to develop a voice to discover her identity and self worth in which leads to a good relationship with Teacake.

In conclusion one may see that voice and silence are equally important due to them going hand to hand. Silence is seen as a time of reflection in order to regroup and live life through a different lense. Voice is also an important outlet to express one’s emotions and accept yourself with love. Although you may see moments of silence and voice throughout the novel both play a huge role in shaping one’s identity.”

Silence in Their Eyes Were Watching God. (2021, May 27). Retrieved from https://papersowl.com/examples/silence-in-their-eyes-were-watching-god/