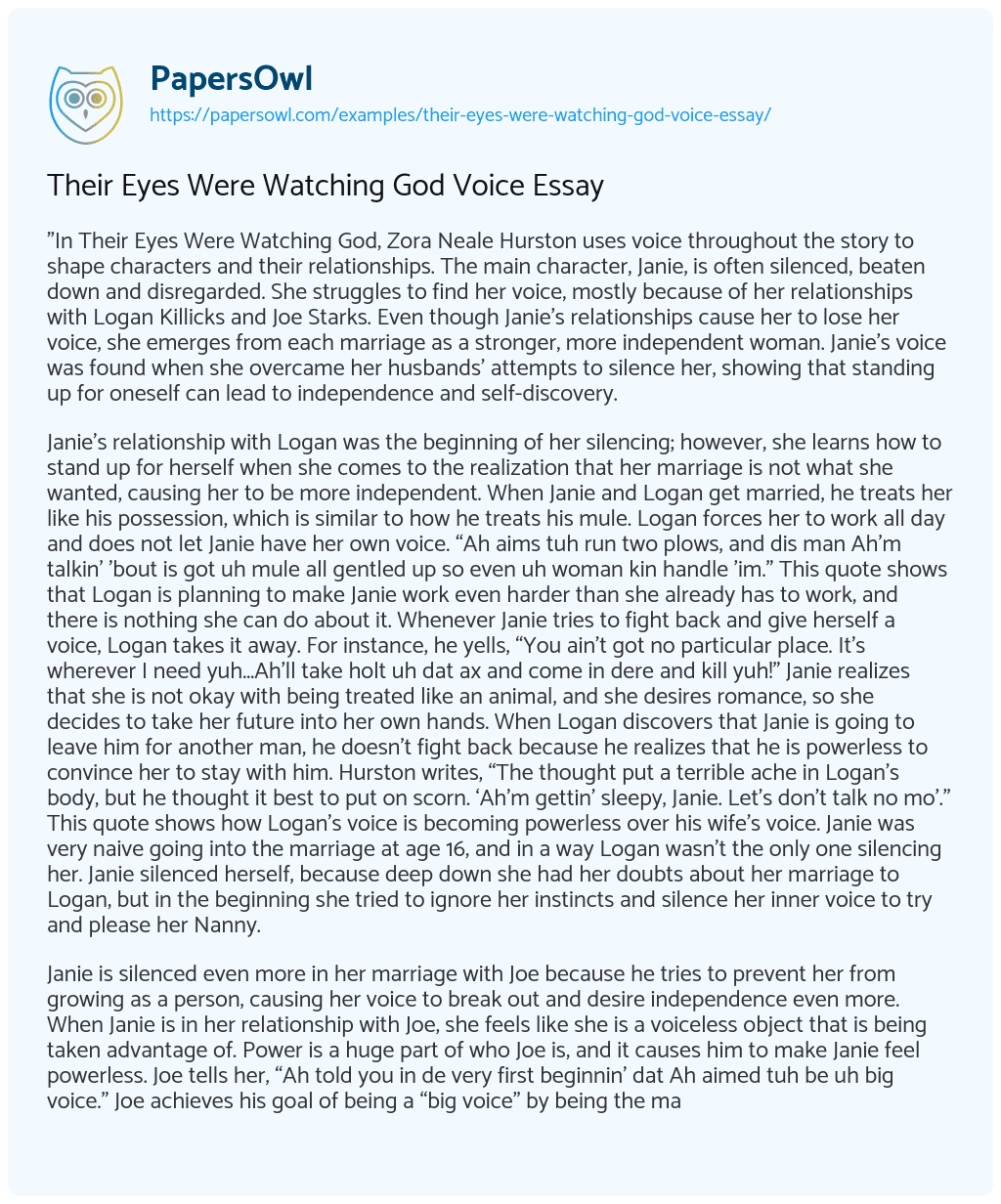 “In Their Eyes Were Watching God, Zora Neale Hurston uses voice throughout the story to shape characters and their relationships. The main character, Janie, is often silenced, beaten down and disregarded. She struggles to find her voice, mostly because of her relationships with Logan Killicks and Joe Starks. Even though Janie’s relationships cause her to lose her voice, she emerges from each marriage as a stronger, more independent woman. Janie’s voice was found when she overcame her husbands’ attempts to silence her, showing that standing up for oneself can lead to independence and self-discovery.

Janie’s relationship with Logan was the beginning of her silencing; however, she learns how to stand up for herself when she comes to the realization that her marriage is not what she wanted, causing her to be more independent. When Janie and Logan get married, he treats her like his possession, which is similar to how he treats his mule. Logan forces her to work all day and does not let Janie have her own voice. “Ah aims tuh run two plows, and dis man Ah’m talkin’ ’bout is got uh mule all gentled up so even uh woman kin handle ’im.” This quote shows that Logan is planning to make Janie work even harder than she already has to work, and there is nothing she can do about it. Whenever Janie tries to fight back and give herself a voice, Logan takes it away. For instance, he yells, “You ain’t got no particular place. It’s wherever I need yuh…Ah’ll take holt uh dat ax and come in dere and kill yuh!” Janie realizes that she is not okay with being treated like an animal, and she desires romance, so she decides to take her future into her own hands. When Logan discovers that Janie is going to leave him for another man, he doesn’t fight back because he realizes that he is powerless to convince her to stay with him. Hurston writes, “The thought put a terrible ache in Logan’s body, but he thought it best to put on scorn. ‘Ah’m gettin’ sleepy, Janie. Let’s don’t talk no mo’.” This quote shows how Logan’s voice is becoming powerless over his wife’s voice. Janie was very naive going into the marriage at age 16, and in a way Logan wasn’t the only one silencing her. Janie silenced herself, because deep down she had her doubts about her marriage to Logan, but in the beginning she tried to ignore her instincts and silence her inner voice to try and please her Nanny.

Janie is silenced even more in her marriage with Joe because he tries to prevent her from growing as a person, causing her voice to break out and desire independence even more. When Janie is in her relationship with Joe, she feels like she is a voiceless object that is being taken advantage of. Power is a huge part of who Joe is, and it causes him to make Janie feel powerless. Joe tells her, “Ah told you in de very first beginnin’ dat Ah aimed tuh be uh big voice.” Joe achieves his goal of being a “big voice” by being the mayor of Eatonville and controlling people in it. Joe’s “big voice” causes him to dominate Janie’s weakened voice. There is a grand opening for their new store in Eatonville, where Tony Taylor and Joe give a speech. The people of Eatonville want Janie, the new mayor’s wife, to give a speech, but Joe interrupts saying, “Thank yuh fuh yo’ compliments, but mah wife don’t know nothin’ ’ bout no speech-makin’. Ah never married her for nothin’ lak dat. She’s uh woman and her place is in de home.” This quote shows that Joe does not let Janie have her own voice, and how he is taking advantage of her because he sees her as a voiceless object that will only be beneficial for his plans in Eatonville. When Janie realizes all of this, she falls out of love with Joe. When Joe is dying, Janie finally has the courage to speak up for herself by telling him, “But Ah ain’t goin’ outa here and Ah ain’t gointuh hush. Naw, you gointuh listen tuh me one time befo’ you die. Have yo’ way all yo’ life, trample and mash down and then die ruther than tuh let yo’self heah ‘bout it. Listen, Jody, you ain’t de Jody ah run off down de road wid. You’se whut’s left after he died. Ah run off tuh keep house wid you in uh wonderful way. But you wasn’t satisfied wid me de way Ah was. Naw! Mah own mind had tuh be squeezed and crowded out tuh make room for yours in me.” This quote shows that Janie has finally broken free from Joe’s power and found her own voice. After Janie stands up to Joe while he’s on his deathbed, it destroys his desire to live.

In Janie and Tea Cake’s relationship, Tea Cake helps her grow as a person and find her voice, which eventually leads to self discovery and independence. Janie is already starting to find her own voice when she meets Tea Cake, which is seen when she stands up to Joe; however, Tea Cake plays an important role in helping Janie discover her true self. Rather than suffocating her personality like Joe did, he lets Janie be who she wants to be. “He drifted off into sleep and Janie looked down on him and felt a self-crushing love. So her soul crawled out from its hiding place.” This quote shows how Tea Cake is helping Janie’s voice to grow, especially when the author says, “ So her soul crawled out from its hiding place.” This “hiding place” that Hurston talks about symbolises how Janie’s voice has been silenced in the past by Logan and Joe, and how her new relationship is allowing her inner voice to speak out. An important reason that this relationship is different from her past marriages is that they treat each other as equals. When they first meet, Tea Cake says, “How about playin’ you some checkers?” He teaches Janie the rules of the game, and they enjoy each others company while playing checkers for the rest of the day. Hurston is discreetly foreshadowing an important aspect of their relationship, because the game of checkers symbolises equality. Due to this newfound equality in Janie’s life, she is not dependent on Tea Cake, which is seen when she remains strong and independent after he dies. Tea Cake teaches her how to hunt and shoot a gun, and she eventually develops a better shot than he does. Ironically, by teaching Janie how to shoot a gun, he gives her the skills that eventually enable her to kill him. “Oh, you needs tuh learn how. ’Tain’t no need uh you not knowin’ how tuh handle shootin’ tools. Even if you didn’t never find no game, it’s always some trashy rascal dat needs uh good killin’.” This quote shows the irony in him teaching her to shoot. When Tea Cake gets rabies and tries to kill Janie, she decides to save herself instead of surrendering her life to the man she loves. Hurston says, “Now she was her sacrificing self with Tea Cake’s head in her lap. She had wanted him to live so much and he was dead. No hour is ever eternity, but it has its right to weep. Janie held his head tightly to her breast and wept and thanked him wordlessly for giving her the chance for loving service.” This quote shows that Janie is grateful for Tea Cake helping her grow into the person she turned out to be. The outcome of saving herself shows that Tea Cake’s true purpose is to help Janie’s inner voice to break free, and not make Janie rely on him for happiness.

In Their Eyes Were Watching God, Janie was seen as a voiceless object in her first two relationships. She was beaten-down to the point where she couldn’t handle her voice being silenced anymore. Throughout the book, each relationship teaches her an important lesson. Janie learns about love, about how speaking out for yourself can lead to independence, and about how equality is the key to a strong relationship.”

Their Eyes Were Watching God Voice Essay. (2021, May 27). Retrieved from https://papersowl.com/examples/their-eyes-were-watching-god-voice-essay/