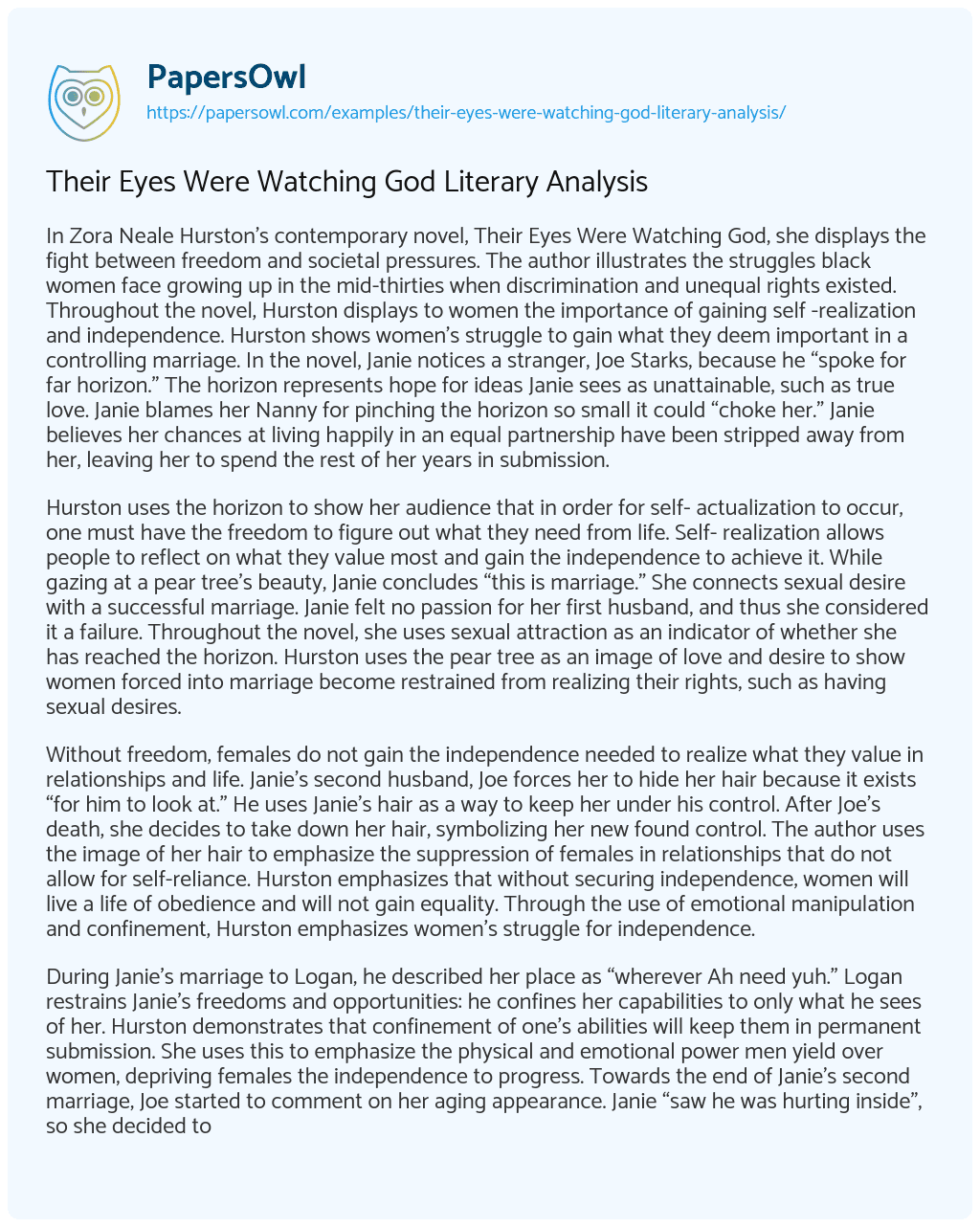 In Zora Neale Hurston’s contemporary novel, Their Eyes Were Watching God, she displays the fight between freedom and societal pressures. The author illustrates the struggles black women face growing up in the mid-thirties when discrimination and unequal rights existed. Throughout the novel, Hurston displays to women the importance of gaining self -realization and independence. Hurston shows women’s struggle to gain what they deem important in a controlling marriage. In the novel, Janie notices a stranger, Joe Starks, because he “spoke for far horizon.” The horizon represents hope for ideas Janie sees as unattainable, such as true love. Janie blames her Nanny for pinching the horizon so small it could “choke her.” Janie believes her chances at living happily in an equal partnership have been stripped away from her, leaving her to spend the rest of her years in submission.

Hurston uses the horizon to show her audience that in order for self- actualization to occur, one must have the freedom to figure out what they need from life. Self- realization allows people to reflect on what they value most and gain the independence to achieve it. While gazing at a pear tree’s beauty, Janie concludes “this is marriage.” She connects sexual desire with a successful marriage. Janie felt no passion for her first husband, and thus she considered it a failure. Throughout the novel, she uses sexual attraction as an indicator of whether she has reached the horizon. Hurston uses the pear tree as an image of love and desire to show women forced into marriage become restrained from realizing their rights, such as having sexual desires.

Without freedom, females do not gain the independence needed to realize what they value in relationships and life. Janie’s second husband, Joe forces her to hide her hair because it exists “for him to look at.” He uses Janie’s hair as a way to keep her under his control. After Joe’s death, she decides to take down her hair, symbolizing her new found control. The author uses the image of her hair to emphasize the suppression of females in relationships that do not allow for self-reliance. Hurston emphasizes that without securing independence, women will live a life of obedience and will not gain equality. Through the use of emotional manipulation and confinement, Hurston emphasizes women’s struggle for independence.

During Janie’s marriage to Logan, he described her place as “wherever Ah need yuh.” Logan restrains Janie’s freedoms and opportunities: he confines her capabilities to only what he sees of her. Hurston demonstrates that confinement of one’s abilities will keep them in permanent submission. She uses this to emphasize the physical and emotional power men yield over women, depriving females the independence to progress. Towards the end of Janie’s second marriage, Joe started to comment on her aging appearance. Janie “saw he was hurting inside”, so she decided to endure his rude remarks. Hurston uses Janie’s passiveness to show her audience how emotional manipulation can restrict a person from sharing their thoughts of turmoil.

Only when a person freely expresses themselves can they change their situation. Hurston emphasizes that women must realize their self worth in order to see their full potential. After a fight, Janie reveals she’d “rather be dead” than have Joe think she would hurt him. Hurston shows the loss of Janie’s principles and heavy influence on women to put their husband’s feelings first. Hurston stresses the struggle for women to capture power in a manipulative and controlling relationship. The author highlights that independence and self-realization compose the keys to satisfaction with one’s life choices.

Throughout the novel, Hurston uses manipulation and restriction to show the struggle of women to gain self-actualization and utter acceptance. Hurston compares the character’s relationships in order to show the continuous effects of oppression in women. In Janie’s first marriage, Logan complains about her work ethic saying, “You think youse white folks.” Logan forces Janie to do labor work and does not allow her to speak back to him. Hurston uses the character Logan to show discrimination of black women: Logan stereotypes black females as more labor tolerant individuals. Hurston emphasizes that black women are less respected and considered disrespectful if they disagree.

The author shows a lack of independence allows for discrimination and suppression for a group of people. In Janie’s second marriage, the longest one, her husband believes “somebody got to think for women.” Janie’s husband does not allow for her to speak and keeps her working in the store. Hurston uses the second marriage to show the repetition of oppression among women. She uses the marriage to show that men consider women inferior and ignorant. Hurston highlights the need for self-actualization and independence to reach equality. In contrast, Janie’s marriage to Tea Cake allowed her to gain independence and arrive at the horizon. Tea Cake remains thankful for Janie because she came “along and made something’ outta” him. Tea Cake allows Janie to voice her opinions, make decisions, and experience real affection. She found her true love in a marriage that allowed her to exist as her own person and reflect on the past. Hurston compares this marriage to the previous two to show the effects of gaining independence and control. Hurston emphasizes that women must have self-actualization in order to end oppression and establish equality among men and women.

In Their Eyes Were Watching God, Hurston displays the struggle for independence for women. Hurston displays the life of light-skinned Janie Crawford, who struggles in her life through three marriages and oppression. However, Janie remains appreciative for her life and takes a lesson from each marriage as she evolves to better herself. The author uses the marriages and the characters to show how suppression prevents women from growing and gaining equality. Hurston wrote the novel in order to show women the importance of gaining self-realization and independence.

Their Eyes were Watching God Analysis