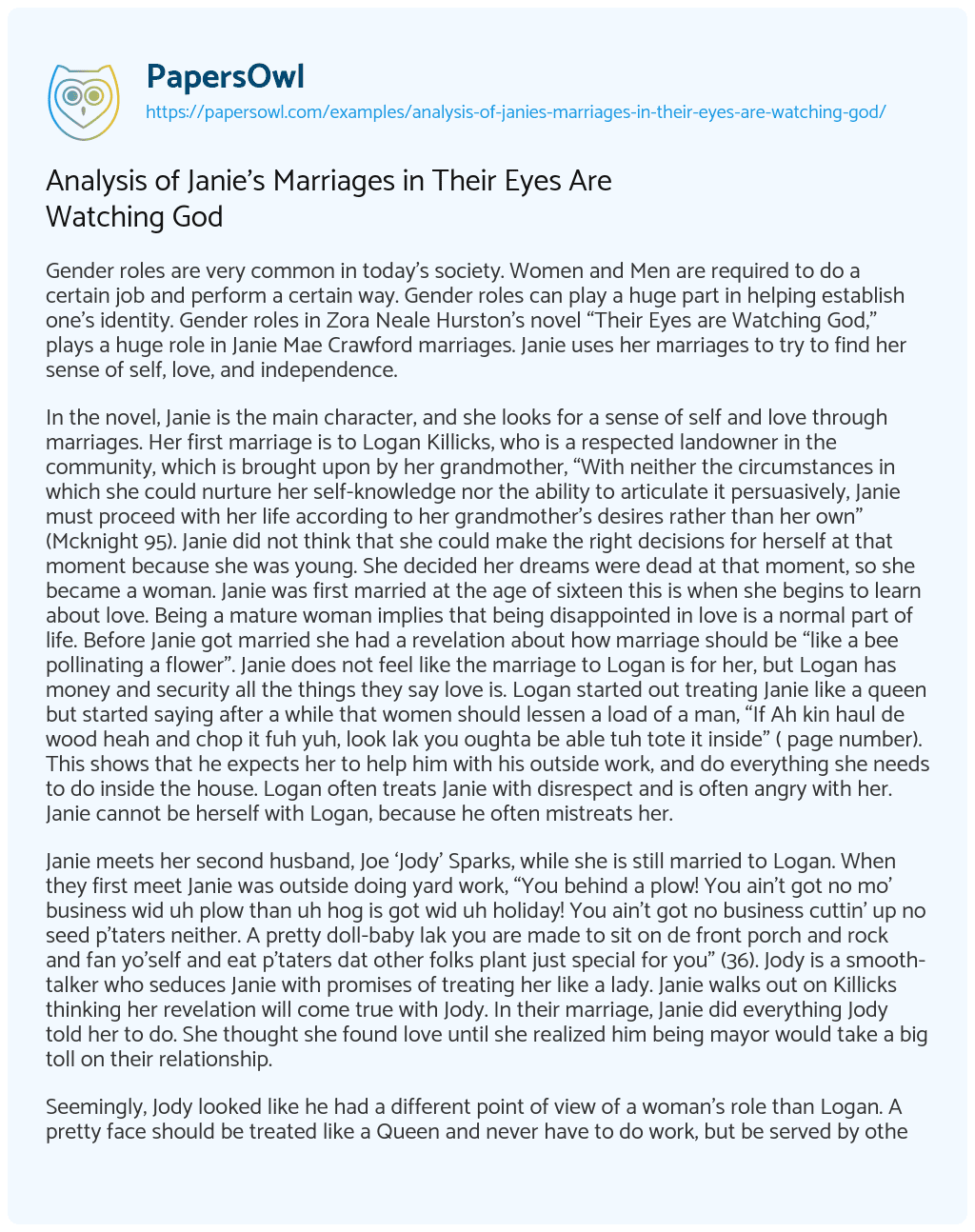 Gender roles are very common in today’s society. Women and Men are required to do a certain job and perform a certain way. Gender roles can play a huge part in helping establish one’s identity. Gender roles in Zora Neale Hurston’s novel “Their Eyes are Watching God,” plays a huge role in Janie Mae Crawford marriages. Janie uses her marriages to try to find her sense of self, love, and independence.

In the novel, Janie is the main character, and she looks for a sense of self and love through marriages. Her first marriage is to Logan Killicks, who is a respected landowner in the community, which is brought upon by her grandmother, “With neither the circumstances in which she could nurture her self-knowledge nor the ability to articulate it persuasively, Janie must proceed with her life according to her grandmother’s desires rather than her own” (Mcknight 95). Janie did not think that she could make the right decisions for herself at that moment because she was young. She decided her dreams were dead at that moment, so she became a woman. Janie was first married at the age of sixteen this is when she begins to learn about love. Being a mature woman implies that being disappointed in love is a normal part of life. Before Janie got married she had a revelation about how marriage should be “like a bee pollinating a flower”. Janie does not feel like the marriage to Logan is for her, but Logan has money and security all the things they say love is. Logan started out treating Janie like a queen but started saying after a while that women should lessen a load of a man, “If Ah kin haul de wood heah and chop it fuh yuh, look lak you oughta be able tuh tote it inside” ( page number). This shows that he expects her to help him with his outside work, and do everything she needs to do inside the house. Logan often treats Janie with disrespect and is often angry with her. Janie cannot be herself with Logan, because he often mistreats her.

Janie meets her second husband, Joe ‘Jody’ Sparks, while she is still married to Logan. When they first meet Janie was outside doing yard work, “You behind a plow! You ain’t got no mo’ business wid uh plow than uh hog is got wid uh holiday! You ain’t got no business cuttin’ up no seed p’taters neither. A pretty doll-baby lak you are made to sit on de front porch and rock and fan yo’self and eat p’taters dat other folks plant just special for you” (36). Jody is a smooth-talker who seduces Janie with promises of treating her like a lady. Janie walks out on Killicks thinking her revelation will come true with Jody. In their marriage, Janie did everything Jody told her to do. She thought she found love until she realized him being mayor would take a big toll on their relationship.

Seemingly, Jody looked like he had a different point of view of a woman’s role than Logan. A pretty face should be treated like a Queen and never have to do work, but be served by other people. What Janie does not realize is that Joe does not think pampering a woman is right because she is human, but because she is a valuable object. Jody was not that different from Logan, because they both thought women were objects. It’s simply that Jody thinks women are objects to look at and Logan thinks they are objects that should be utilized. Jody was no better than Logan and would always belittle Janie in front of others. He did not simply want power he wanted Janie’s submission, “He wanted her submission and he’d keep on fighting until he felt he had it” (86). At first, Janie wasn’t having it but she gradually became submissive. Jody does not want Janie to speak her mind, so when she does he beats her, so she has no voice. When Jody dies the first thing that Janie does is taking off the headscarf that he required her to wear. After she takes it off, she feels free.

Janie’s last marriage was to a man named Tea Cake. When she meets Tea Cake she has already developed a strong sense of self, so he helps accelerate her growth. Tracy L. bealer states, “Critics who read the novel as a narrative about Janie’s quest for selfhood or her progressive acquisition of the voice tend to cast Tea Cake as a utopian alternative to the paradigm of masculinist domination identified by Janie’s grandmother and typified by her second husband, Joe Sparks” (311). Tea Cake was her utopia, so she could be herself with him. He made her feel loved compared to her other marriages. He showed her that men and women can be equal and pushed her towards her goals. When they first met he taught her how to play checkers something that men around the store usually played. At the beginning of their relationship Janie thought he only wanted her for her money, because she never really experience happiness, but he proved her wrong. He wanted her because he loved and respected her. Tea Cake helps Janie build onto her already strong sense of self, but he is not indispensable. This is evident when she shoots him for trying to kill her.

Although, ‘Their Eyes Are Watching God,” is about Janie’s relationships with other people, it is also a story about Janie’s search for a strong sense of self. The novel ends with Janie being along telling her story to, her friend, Pheoby. The novel is about her quest to find a secure sense of independence. At the end of her novel, Janie returns to Eatonville a strong and proud woman, at the beginning of the novel she is unsure of who she is and where she wants to live. When Jody enters her life, he seems different from Logan. He says that he will use her ambition for conquest to help her realize her dreams. All Jody does is suppress Janie’s power, but she regains it when he is on his deathbed. Joe and Logan are a huge part of how Janie regain her strong sense of self: “Her first two marriages crumble because Logan Killicks and Joe Starks posses bourgeois visions of race, class, and gender boundaries, all of which rely first and foremost on their wife’s deference to them” (Putnam 13). Their marriages do not last because they think women are objects. They had no respect for women and what they could accomplish. Janie realizes at the end of the novel that she has grown: “The novel’s opening words, comparing people’s dreams to ‘ships at a distance’ that ‘sail forever on the horizon,” establish Janie aas someone who has sailed to the horizon” (Ramsey 41). Janie has reached the horizon and is at peace where she is in her life. Janie was able to find independence, love, and a strong sense of self all the things she always wanted.

Their Eyes Are Watching God is a great novel about finding your independence in a gender role society. Women are supposed to obey their husbands and not speak up for themselves. It is portrayed that woman can only gain power through marriages to rich and powerful men. Janie used marriages to try and find out who she was and where she should be in life, but she ended up alone. Janie learned that she did not need a relationship to determine her sense of self or independence.

Analysis of Janie’s Marriages in Their Eyes Are Watching God. (2019, Dec 06). Retrieved from https://papersowl.com/examples/analysis-of-janies-marriages-in-their-eyes-are-watching-god/