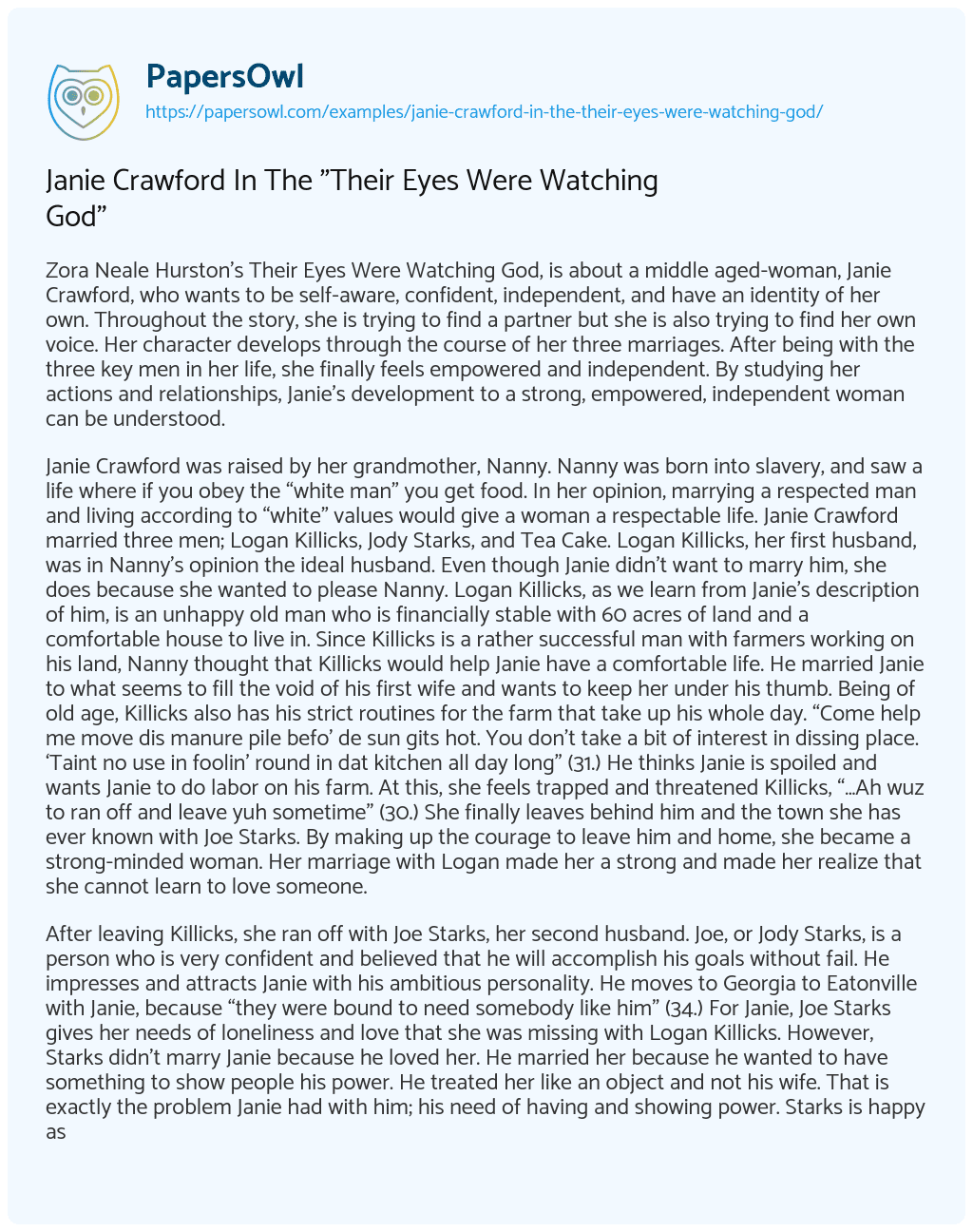 Zora Neale Hurston’s Their Eyes Were Watching God, is about a middle aged-woman, Janie Crawford, who wants to be self-aware, confident, independent, and have an identity of her own. Throughout the story, she is trying to find a partner but she is also trying to find her own voice. Her character develops through the course of her three marriages. After being with the three key men in her life, she finally feels empowered and independent. By studying her actions and relationships, Janie’s development to a strong, empowered, independent woman can be understood.

Janie Crawford was raised by her grandmother, Nanny. Nanny was born into slavery, and saw a life where if you obey the “white man” you get food. In her opinion, marrying a respected man and living according to “white” values would give a woman a respectable life. Janie Crawford married three men; Logan Killicks, Jody Starks, and Tea Cake. Logan Killicks, her first husband, was in Nanny’s opinion the ideal husband. Even though Janie didn’t want to marry him, she does because she wanted to please Nanny. Logan Killicks, as we learn from Janie’s description of him, is an unhappy old man who is financially stable with 60 acres of land and a comfortable house to live in. Since Killicks is a rather successful man with farmers working on his land, Nanny thought that Killicks would help Janie have a comfortable life. He married Janie to what seems to fill the void of his first wife and wants to keep her under his thumb. Being of old age, Killicks also has his strict routines for the farm that take up his whole day. “Come help me move dis manure pile befo’ de sun gits hot. You don’t take a bit of interest in dissing place. ‘Taint no use in foolin’ round in dat kitchen all day long” (31.) He thinks Janie is spoiled and wants Janie to do labor on his farm. At this, she feels trapped and threatened Killicks, “…Ah wuz to ran off and leave yuh sometime” (30.) She finally leaves behind him and the town she has ever known with Joe Starks. By making up the courage to leave him and home, she became a strong-minded woman. Her marriage with Logan made her a strong and made her realize that she cannot learn to love someone.

After leaving Killicks, she ran off with Joe Starks, her second husband. Joe, or Jody Starks, is a person who is very confident and believed that he will accomplish his goals without fail. He impresses and attracts Janie with his ambitious personality. He moves to Georgia to Eatonville with Janie, because “they were bound to need somebody like him” (34.) For Janie, Joe Starks gives her needs of loneliness and love that she was missing with Logan Killicks. However, Starks didn’t marry Janie because he loved her. He married her because he wanted to have something to show people his power. He treated her like an object and not his wife. That is exactly the problem Janie had with him; his need of having and showing power. Starks is happy as long as he can “exert” his power and has a command on everyone around him. Janie puts up with Joe, even with his never-ending demands. He wants her to tie her hair and not talk to men, because he doesn’t like it when she interacts with other men; scolds her when she does something wrong; beat her. But despite his character, he continues Janie’s growth to an empowered woman. Because of his actions, she finally finds a voice of her own. She voices her opinions of him, and tells him that he wasn’t the man that she met for the first time. Soon after he dies, almost as if it was her force of wrath. In her marriage with Starks, she realized what it felt like to be under the control of a man, and now she is empowered as she was able to voice her own opinions without any fears.

Janie’s relationship with Tea Cake is a relationship of mutual admiration, intimacy and respect for each other. Her marriage to Tea Cake makes her feel like she was reborn. After her two marriages to Logan and Jody, she feels that she has been given another chance to life being with Tea Cake. Through her relationship with Tea Cake, she becomes more self-aware and independent. Her path to having her own identity and voice had started in her relationship with Jody Starks when she stood up for herself. Jody was fearful of losing his male dominance and her to someone else because she was a beautiful woman, and hence used his “power.” That is when Janie starts to find her voice. Being with Tea Cake just sped up her process of self-awareness. He did that by teaching her to shoot and making her experience things that she had never before such as gambling. She was so comfortable with Tea Cake that she was able to speak up about how she felt. This marriage was different than her others as they communicated with each other. Tea Cake listened when she talks and vice versa. The story depicts the emergence of empowerment of women. Empower means to make someone more stronger and more confident. Tea Cake made Janie the confident and independent woman she is at the end, where she didn’t care about what the people in her town were saying about her.

Through the course of the story, Janie finds her voice and become more independent. With her marriage to Logan, she learns she could not learn to love someone. With Jody, she realizes that equality in a marriage is very important. And with Tea Cake, she realizes that true love cannot be found. And with her learnings from all three of her marriages, she became a strong, empowered, and independent woman.

Janie Crawford In The "Their Eyes Were Watching God". (2021, Mar 01). Retrieved from https://papersowl.com/examples/janie-crawford-in-the-their-eyes-were-watching-god/