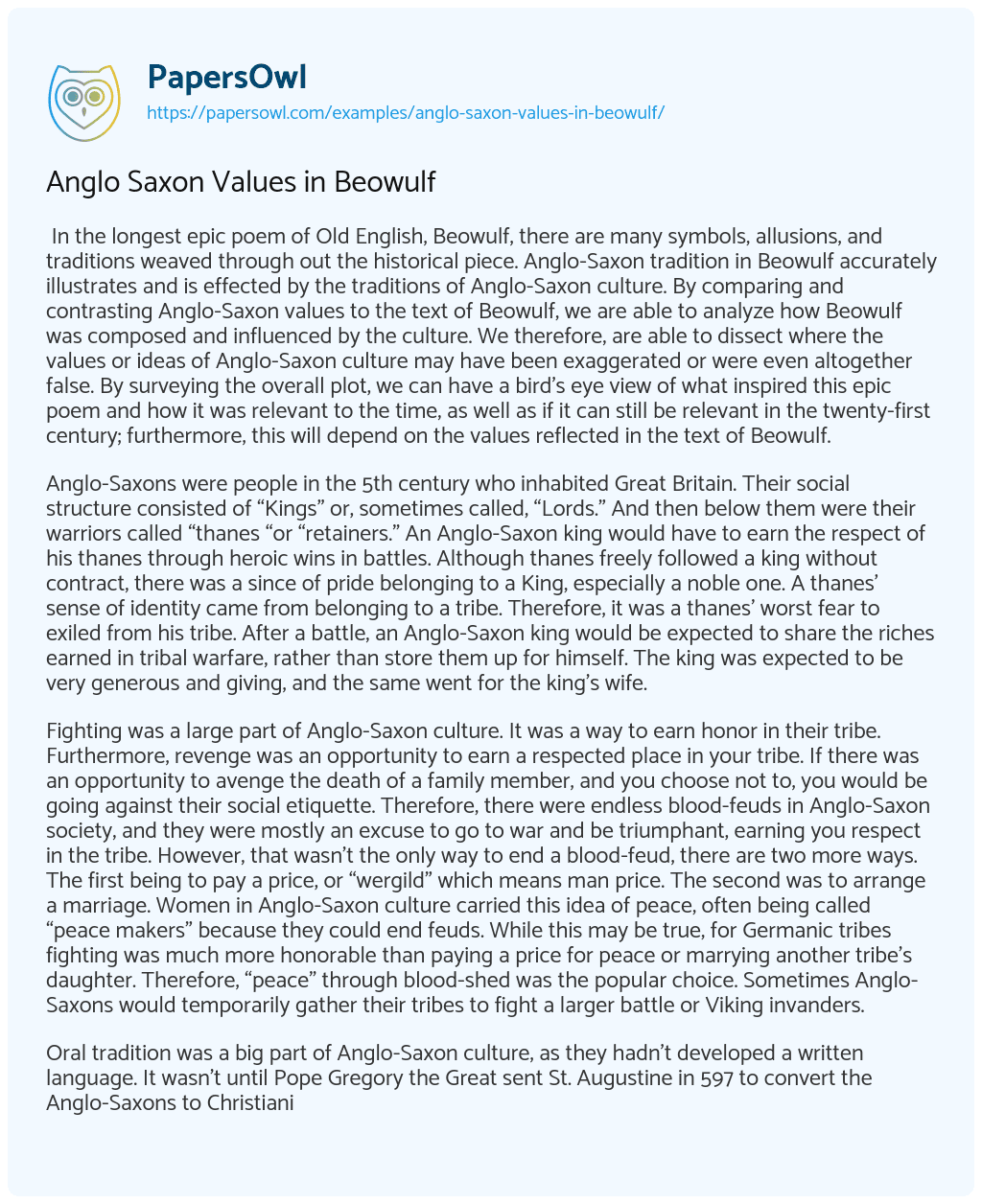 In the longest epic poem of Old English, Beowulf, there are many symbols, allusions, and traditions weaved through out the historical piece. Anglo-Saxon tradition in Beowulf accurately illustrates and is effected by the traditions of Anglo-Saxon culture. By comparing and contrasting Anglo-Saxon values to the text of Beowulf, we are able to analyze how Beowulf was composed and influenced by the culture. We therefore, are able to dissect where the values or ideas of Anglo-Saxon culture may have been exaggerated or were even altogether false. By surveying the overall plot, we can have a bird’s eye view of what inspired this epic poem and how it was relevant to the time, as well as if it can still be relevant in the twenty-first century; furthermore, this will depend on the values reflected in the text of Beowulf.

Anglo-Saxons were people in the 5th century who inhabited Great Britain. Their social structure consisted of “Kings” or, sometimes called, “Lords.” And then below them were their warriors called “thanes “or “retainers.” An Anglo-Saxon king would have to earn the respect of his thanes through heroic wins in battles. Although thanes freely followed a king without contract, there was a since of pride belonging to a King, especially a noble one. A thanes’ sense of identity came from belonging to a tribe. Therefore, it was a thanes’ worst fear to exiled from his tribe. After a battle, an Anglo-Saxon king would be expected to share the riches earned in tribal warfare, rather than store them up for himself. The king was expected to be very generous and giving, and the same went for the king’s wife.

Fighting was a large part of Anglo-Saxon culture. It was a way to earn honor in their tribe. Furthermore, revenge was an opportunity to earn a respected place in your tribe. If there was an opportunity to avenge the death of a family member, and you choose not to, you would be going against their social etiquette. Therefore, there were endless blood-feuds in Anglo-Saxon society, and they were mostly an excuse to go to war and be triumphant, earning you respect in the tribe. However, that wasn’t the only way to end a blood-feud, there are two more ways. The first being to pay a price, or “wergild” which means man price. The second was to arrange a marriage. Women in Anglo-Saxon culture carried this idea of peace, often being called “peace makers” because they could end feuds. While this may be true, for Germanic tribes fighting was much more honorable than paying a price for peace or marrying another tribe’s daughter. Therefore, “peace” through blood-shed was the popular choice. Sometimes Anglo-Saxons would temporarily gather their tribes to fight a larger battle or Viking invanders.

Oral tradition was a big part of Anglo-Saxon culture, as they hadn’t developed a written language. It wasn’t until Pope Gregory the Great sent St. Augustine in 597 to convert the Anglo-Saxons to Christianity. It was because of the Christian missionaries that writing and the Latin alphabet was brought to the Anglo-Saxon Tribes. In 627 King of Northumbria, Edwin, converted to Christianity and started to write laws. Alexander the Great, who was a patron of literature, helped works be translated into old English. Such as Beowulf. However, before Pope Gregory sent missionaries, the Anglo-Saxons had no written language. This means that stories weren’t read in books, they were told by word of mouth. For centuries stories like Beowulf were passed down orally. From generation to generation the stories details may have changed, but the overall plot and its symbols remain. From oral tradition birthed poetry. Poets and harpist’s recited and sung as entertainment in the mead halls. Anglo-Saxon poetry wasn’t like todays typical rhyme and meter writing, it focused more on accent and alliteration.

The Anglo-Saxons language and style is called old English. Literature has to treat it as a language in spite of it being composed of different dialects. Our syntax of words and sentences come from Anglo-Saxons, as well as how we tend to shorten words and simplify grammar. Our days of the week are named after Anglo-Saxon gods. For example, we get Wednesday from Woden, the war god and Friday from Frigga, the goddess of the home. Old English is not uniform like many languages are.

Anglo-Saxons valued, as you might have concluded by now, honor. More specifically, being honored by their tribe. A lot of a Thanes’ self-worth was tied up in whether their king and tribe respected and honored them. Thanes earned this honor by winning in battle. Or even sacrificing themselves during battle. There were also ways you could be dishonored; for example, being the last to live in a battle where most of your tribe members died would be a disgrace. It would be seen that you didn’t fight hard enough, to your death essentially.

Beowulf is the oldest surviving long epic poem, consisting of 3,182 alliterative lines. It’s popularly credited one of the most important works of old English literature. It’s a story of the supernatural and of Anglo-Saxon history. The story takes place in Denmark and Sweden in the 6th century. The story is focused around Beowulf and his tribe The Geat’s. Although it is not known whether Beowulf was a real man, the Germanic history incorporated in the poem is accurate. Beowulf was a story passed down through oral tradition; therefore, it has lost its original interpretation. Much of the information about the origin of Beowulf is from speculation. What we do know is that the only manuscript left is from circa 1000 AD. The author of Beowulf is also unknown, as most poets of the Anglo-Saxon time are.

Despite the different interpretations, the general plot and symbols remain the same. The story goes like this. King Hrothgar of Denmark has had a successful reign and has built a mead hall called, “Heorot.” It was a place for the king’s warriors to eat, drink, listen to stories, music, and be entertained. But the noise was too much for Grendel, a demon wo lived in the swamplands. Now every night Grendel would come terrorize and kill the warriors, despite the warriors’ efforts the fight back they never defeated Grendel and the terrorizing went on for years. Now a young Geatish warrior named Beowulf heard of King Hrothgar’s distress and sails across the sea with a small group of men, determined to come to the rescue, and defeat Grendel. Now Hrothgar did a great favor for Beowulf’s Father Ecgtheow, therefore the king accepts Beowulf’s offer to fight Grendel, and then they have a feast to celebrate. During the feast one of the Kings men taunts Beowulf and says he doesn’t deserve his reputation and Beowulf defends himself by sharing some of his accomplishments.

At last Grendel arrives and Beowulf defeats him with no weapons, proving he is stronger than the demon. When Grendel tries to escape, Beowulf tears Grendel’s arm off leaving him fatally wounded and Grendel dies. They hung Grendel’s arm in the mead hall like a trophy. The king was overjoyed by the triumph so he through Beowulf a party to celebrate his victory, but after everyone had gone to sleep Grendel’s mother arrived enraged by her son’s death and kills one of Hrothgar’s most trusted soldiers, then slips away. Grendel’s mother lives in a swampy lake, where Beowulf dives into her underwater layer and kills her with a sword made for giants. After, Beowulf finds Grendel’s dead body and decapitates his head to bring to the mead hall. King Hrothgar and his Danes were once again overjoyed and celebrated their land being free from the demons.

Throughout the story we see many Anglo-Saxon values like fighting for revenge. When Grendel’s mother killed one of the kings Danes, Beowulf killed her. We also see honor in the story where each time Beowulf is victorious, he is celebrated and therefore respected. These two values are the most important in Anglo-Saxon tradition.

There are a few symbols throughout the story as well. Such as the negative aroma surrounding water. In the beginning Beowulf must travel through the treacherous sea, Grendel lives near a swamp. Grendel’s mother lives in a layer in a dark swamp. Swords are also symbolized in the story as useless. When Beowulf fights unarmed to prove he doesn’t need them and is stronger than the demon, and again when Beowulf uses the sword to fight Grendel’s mom and her blood melts the sword.

Beowulf is One of the most Highly Favored