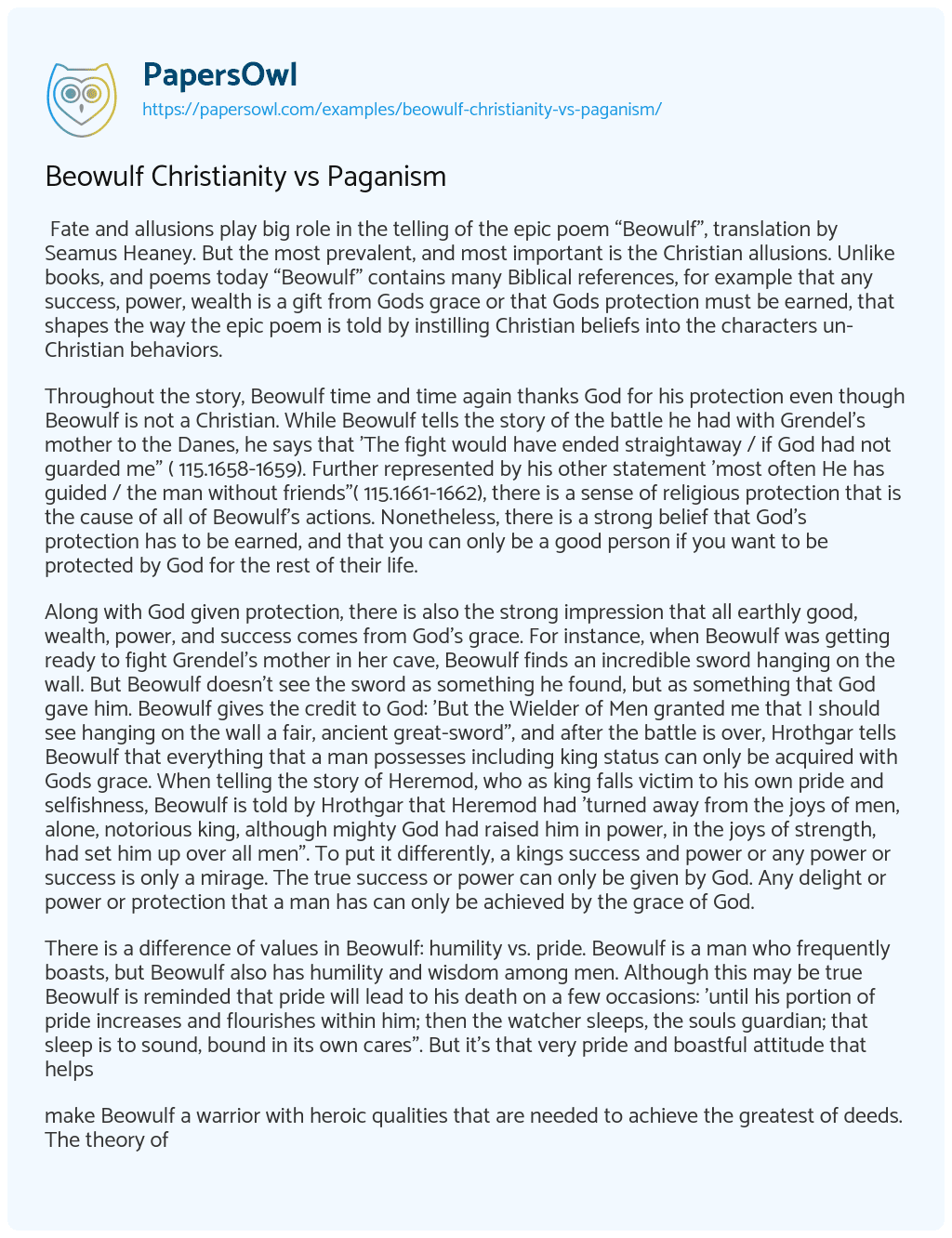 Fate and allusions play big role in the telling of the epic poem “Beowulf”, translation by Seamus Heaney. But the most prevalent, and most important is the Christian allusions. Unlike books, and poems today “Beowulf” contains many Biblical references, for example that any success, power, wealth is a gift from Gods grace or that Gods protection must be earned, that shapes the way the epic poem is told by instilling Christian beliefs into the characters un-Christian behaviors.

Throughout the story, Beowulf time and time again thanks God for his protection even though Beowulf is not a Christian. While Beowulf tells the story of the battle he had with Grendel’s mother to the Danes, he says that ‘The fight would have ended straightaway / if God had not guarded me” ( 115.1658-1659). Further represented by his other statement ‘most often He has guided / the man without friends”( 115.1661-1662), there is a sense of religious protection that is the cause of all of Beowulf’s actions. Nonetheless, there is a strong belief that God’s protection has to be earned, and that you can only be a good person if you want to be protected by God for the rest of their life.

Along with God given protection, there is also the strong impression that all earthly good, wealth, power, and success comes from God’s grace. For instance, when Beowulf was getting ready to fight Grendel’s mother in her cave, Beowulf finds an incredible sword hanging on the wall. But Beowulf doesn’t see the sword as something he found, but as something that God gave him. Beowulf gives the credit to God: ‘But the Wielder of Men granted me that I should see hanging on the wall a fair, ancient great-sword”, and after the battle is over, Hrothgar tells Beowulf that everything that a man possesses including king status can only be acquired with Gods grace. When telling the story of Heremod, who as king falls victim to his own pride and selfishness, Beowulf is told by Hrothgar that Heremod had ‘turned away from the joys of men, alone, notorious king, although mighty God had raised him in power, in the joys of strength, had set him up over all men”. To put it differently, a kings success and power or any power or success is only a mirage. The true success or power can only be given by God. Any delight or power or protection that a man has can only be achieved by the grace of God.

There is a difference of values in Beowulf: humility vs. pride. Beowulf is a man who frequently boasts, but Beowulf also has humility and wisdom among men. Although this may be true Beowulf is reminded that pride will lead to his death on a few occasions: ‘until his portion of pride increases and flourishes within him; then the watcher sleeps, the souls guardian; that sleep is to sound, bound in its own cares”. But it’s that very pride and boastful attitude that helps

make Beowulf a warrior with heroic qualities that are needed to achieve the greatest of deeds. The theory of the calamitous foible of which Beowulf is warned by Hrothgar that was first exemplified by Aristotle a Greek philosopher. However, with all of the talk by the Greeks about the tragic flaw, there is still a strong impression of the heroic man in their literature. Heroism and arrogance are to be adored as long as the hero in this case Beowulf is not striving to be too close to God in Heaven. It isn’t until the period of medievalism that Christianity comes into bloom and the quality of the heroes arrogance falls into disgrace. St. Augustine the Christian philosopher ideas that helped turn men away from egotism and the inclination for material things such as wealth and success. In The City of God by St. Augustine, he goes on an onslaught against pagan culture as well as the religion of pantheism and their gods, crediting them for the corruption of man and of society. It was Augustine’s ideas, and beliefs that is seen in Beowulf, alleviating the arrogance that comes with being a hero and a great warrior.

However; wide the difference of values are, Beowulf is believed to have achieved the extremely hard harmony between humility and pride. For exemplified by the end of The Further Celebration at Heorot when the sword Hunting is given back to Unferth by Beowulf, which the sword turns out to have no positive impact on the battle that Beowulf had with Grendel’s mother. But instead of ridiculing Unferth for the failure of the sword, Beowulf gives commendation to the the sword saying: ‘…in his words he found no fault at all with the sword’s edge; he was a thoughtful man’. Beowulf is a perfect mixture of the two ideals: a warrior with heroic qualities of the pagans and the courteous unselfish servant of the Christians.

All of these examples Beowulf acknowledging God for his protection, the sense that all earthly good, be it success, wealth, and/or power, derives from God, and the difference in values when it comes to pride vs. humility shows that the Biblical references in Beowulf shapes the way the epic poem is told by instilling Christian beliefs into the characters un-Christian behaviors.

The Elements of Christianity in Beowulf