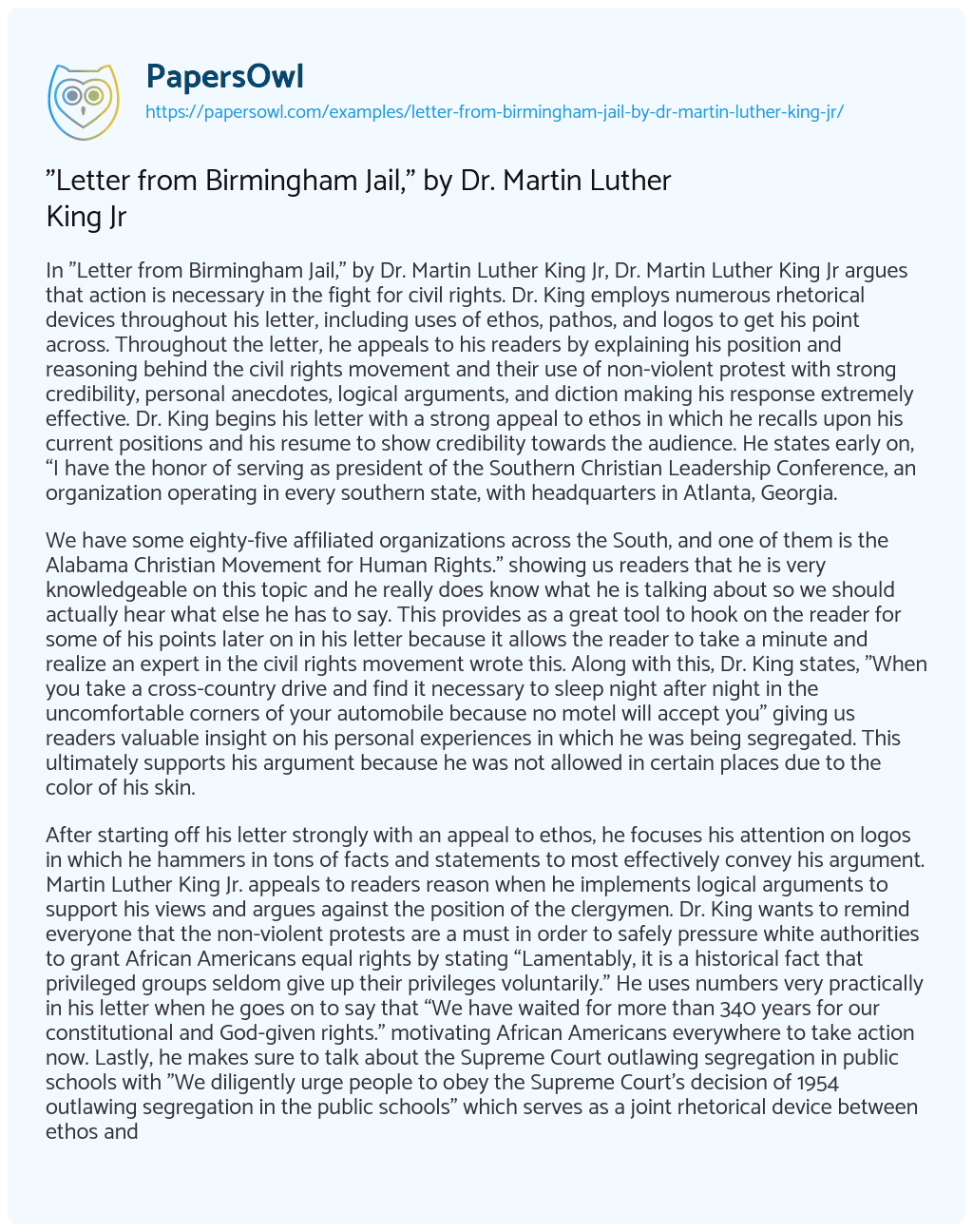 In “Letter from Birmingham Jail,” by Dr. Martin Luther King Jr, Dr. Martin Luther King Jr argues that action is necessary in the fight for civil rights. Dr. King employs numerous rhetorical devices throughout his letter, including uses of ethos, pathos, and logos to get his point across. Throughout the letter, he appeals to his readers by explaining his position and reasoning behind the civil rights movement and their use of non-violent protest with strong credibility, personal anecdotes, logical arguments, and diction making his response extremely effective. Dr. King begins his letter with a strong appeal to ethos in which he recalls upon his current positions and his resume to show credibility towards the audience. He states early on, “I have the honor of serving as president of the Southern Christian Leadership Conference, an organization operating in every southern state, with headquarters in Atlanta, Georgia.

We have some eighty-five affiliated organizations across the South, and one of them is the Alabama Christian Movement for Human Rights.” showing us readers that he is very knowledgeable on this topic and he really does know what he is talking about so we should actually hear what else he has to say. This provides as a great tool to hook on the reader for some of his points later on in his letter because it allows the reader to take a minute and realize an expert in the civil rights movement wrote this. Along with this, Dr. King states, “When you take a cross-country drive and find it necessary to sleep night after night in the uncomfortable corners of your automobile because no motel will accept you” giving us readers valuable insight on his personal experiences in which he was being segregated. This ultimately supports his argument because he was not allowed in certain places due to the color of his skin.

After starting off his letter strongly with an appeal to ethos, he focuses his attention on logos in which he hammers in tons of facts and statements to most effectively convey his argument. Martin Luther King Jr. appeals to readers reason when he implements logical arguments to support his views and argues against the position of the clergymen. Dr. King wants to remind everyone that the non-violent protests are a must in order to safely pressure white authorities to grant African Americans equal rights by stating “Lamentably, it is a historical fact that privileged groups seldom give up their privileges voluntarily.” He uses numbers very practically in his letter when he goes on to say that “We have waited for more than 340 years for our constitutional and God-given rights.” motivating African Americans everywhere to take action now. Lastly, he makes sure to talk about the Supreme Court outlawing segregation in public schools with “We diligently urge people to obey the Supreme Court’s decision of 1954 outlawing segregation in the public schools” which serves as a joint rhetorical device between ethos and logos. Last but not least, Dr. King saves his most constructive rhetorical device for last: pathos.

He expresses concerns for his daughter who is being segregated by saying “…and see tears welling up in her little eyes when she is told that Funtown is closed to colored children” showing he is defending his family and what is right because she is not granted equal educational opportunities as her white counterparts. He is able to strike it at home with phenomenal diction when he says “when you have seen vicious mobs lynch your mothers and fathers at will and drown your sisters and brothers at whim” because everyone has someone they care about they do not want to lose them. He captures the hearts of everyone when he declares, “Injustice anywhere is a threat to justice everywhere.

We are caught in an inescapable network of mutuality, tied in a single garment of destiny. Whatever affects one directly, affects all indirectly.” because when one of us does something, it affects us all so we all must protest non-violently. Along with this, “We know through painful experience that freedom is never voluntarily given by the oppressor; it must be demanded by the oppressed.” and “Now is the time to lift our national policy from the quicksand of racial injustice to the solid rock of human dignity.” motivate the entire African American community in the United States to finally take a stand and join the civil rights movement. He makes it very clear that we all must band together if we ever hope of standing a chance for equal rights providing a sense of unity and brotherhood. In “Letter from Birmingham Jail,” by Dr. Martin Luther King Jr, Dr. King implements multiple rhetorical devices including credibility, personal anecdotes, logical arguments, and diction in the form of ethos, logos, and pathos in order to effectively argue that action is necessary in the fight for civil rights. His entire letter consists of some of his most passionate writing and he explains his position behind the civil rights movement and their use of non-violent protest adequately.

“A Letter from Birmingham Jail” by Martin Luther King Jr

The Letter from Birmingham Jail by Martin Luther King